This winter, the Amon Carter Museum of American Art (the Carter) will unveil an immersive, site-responsive installation by Texas-based artist Natasha Bowdoin. Her transformative environment, In the Night Garden, challenges past, present, and future relationships with the natural world using intricate and immense botanical forms. Through her two and three-dimensional paper creations, Bowdoin subverts the idyllic conventions of floral imagery and creates a meditation on the beauty of uncontrollable forces. Commissioned by the Carter, In the Night Garden furthers the institution’s legacy of showcasing living artists and exhibiting trailblazing works on paper. The installation will be on view in the Carter’s first floor galleries beginning December 22, 2o2o. 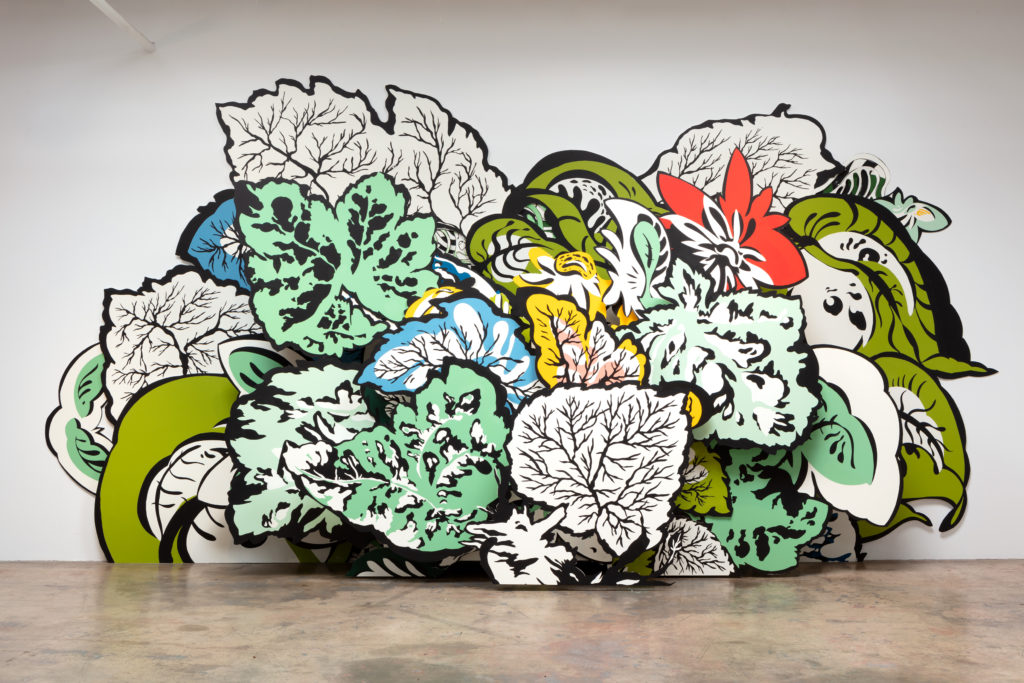 Bowdoin renders oversized moths and vegetation through the use of hand-drawn and painted cut-paper in dazzling, pop-like colors. In the Night Garden compiles these forms to create site-responsive layers of depth—drawn directly on the wall, applied to surfaces, and positioned as freestanding objects—resulting in an environment that appears to be living and moving. Germinating macabre and unpredictable wildlife in her nighttime garden, Bowdoin reconstructs the traditionally feminine associations of botanical themes to emphasize the unwieldy beauty of transformation in nature.

“Featuring Bowdoin’s work at the Carter advances the museum’s mission of providing a platform for artists working today and bringing them into the broader narrative of American art,” said Andrew J. Walker, Executive Director. “This installation reframes nineteenth-century ideals of nature in twenty-first century terms, prompting direct connections to masterworks in the museum’s collection such as the still-life and landscape paintings of Severin Roesen and Martin Johnson Heade. Bowdoin draws on the past to deliver a powerful message, illuminating the importance of the Carter as a space for artists, scholars, and the public to activate the living history of America’s visual vocabulary.” 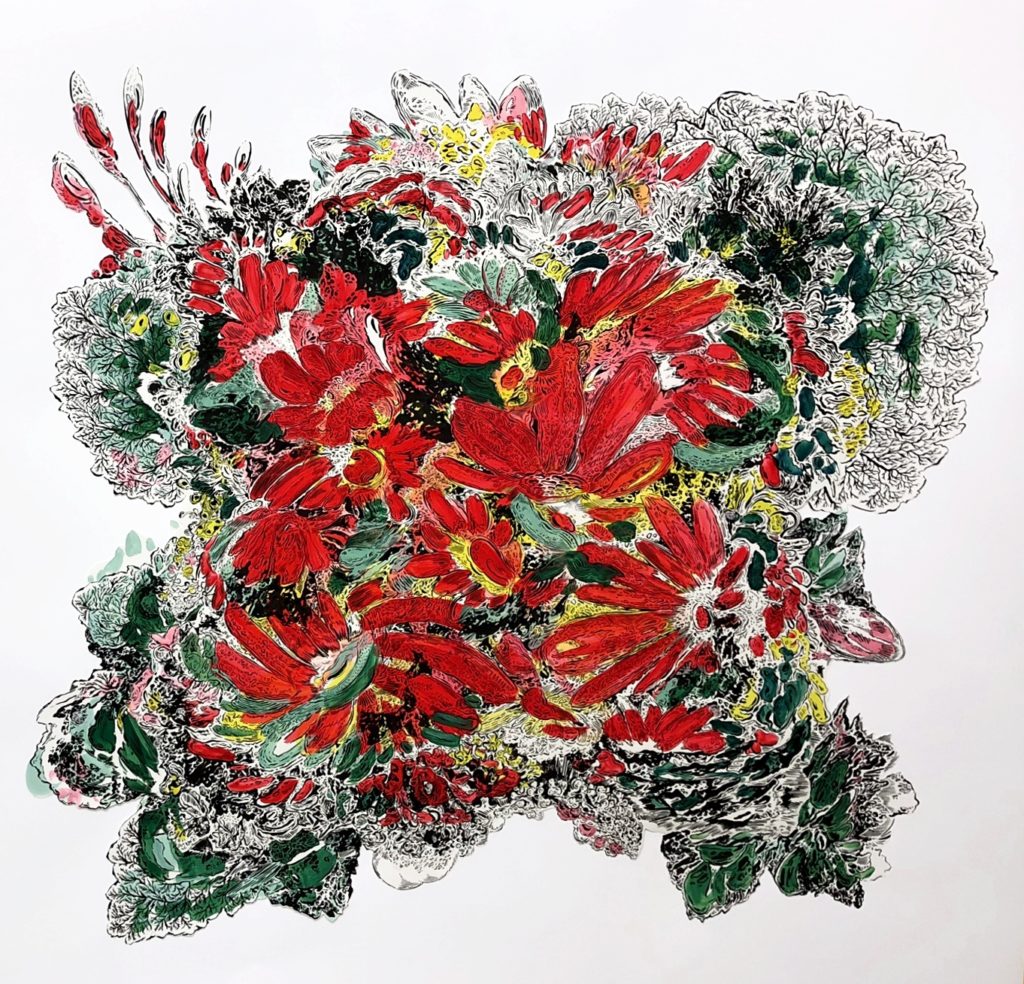 Bowdoin’s collage-based work emerges from the intersection of literary and visual art traditions. In the Night Garden extends the artist’s recent investigations of 19th century naturalist illustrations and the era’s floral dictionaries. Drawn to this historical moment when both science and myth held equal weight in society’s understanding of its environment, Bowdoin identifies in its texts a central “human desire to read into the natural world.” Having studied Victorian works in the Carter’s Library such as Flora’s Dictionary (1837), which taught women the art of conveying coded romantic messages through bouquet arrangements, the artist reengineers the “language of flowers” to reveal that blossoms, leaves, stems, and petals are neither delicate nor cultivated. Artworks from the Carter’s collection that relate to In the Night Garden will be on view nearby Bowdoin’s work, including Severin Roesen’s Still Life of Flowers and Fruit with a River Landscape in the Distance (1867) and Georgia O’Keeffe’s Red Cannas (1927).

“Paper takes on new meaning in Bowdoin’s hands: she is not only a sophisticated draftsman and painter, she can draw with scissors and a precision knife, executing works with her exquisite eye for how paper absorbs and reflects color,” said Shirley Reece-Hughes, Curator of Paintings, Sculpture, and Works on Paper at the Carter. “She empowers her medium, typically thought of as fragile and sensitive, with an assertive voice, capable of upending conventional signs of femininity and sentimentally and forwarding a vital ecological message. Set within her generous and collaborative practice, Bowdoin’s dynamic use of materials distinguishes her as a true innovator.” 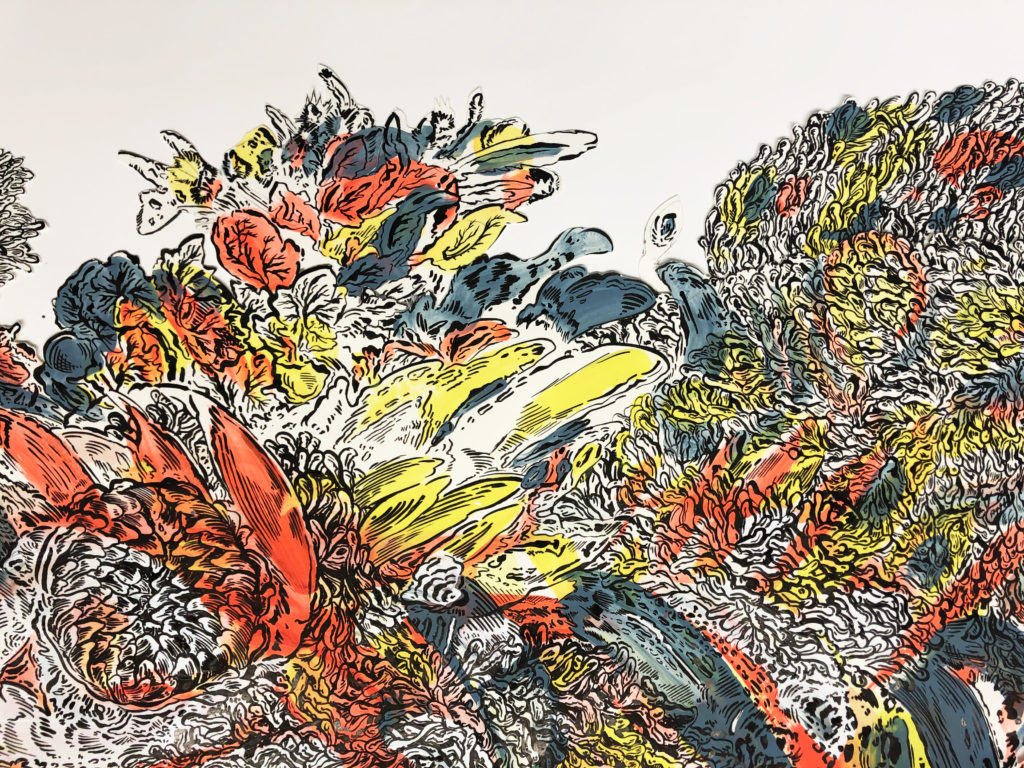 With New England roots that fostered a deep connection to transcendentalist thinkers, and as a double major in classics and art, Bowdoin has cultivated a practice grounded in both literature and the iconography of the natural world. She burst onto the Texas art scene in 2009 and, in creating her own worlds, carries on a tradition of surrealist-inspired Texas-based artists dating back to the 1930s. Since settling in the state, landscape has become an essential character in her labor-intensive, supernaturally charged art.

A core tenet of the museum’s mission since its founding has been commissioning and exhibiting the work of living American artists. From Georgia O’Keeffe’s trailblazing retrospective in 1966, Richard Avedon’s acclaimed In the American West series, which the Carter commissioned in 1979, to Gabriel Dawe’s site-specific installation Plexus no. 34 (2016), to the recent exhibition The Perilous Texas Adventures of Mark Dion (2020), the museum’s engagement with artists working today ensures that it continues to tell the story of American art’s past while also cultivating its future.