Worth the Wait: Dickies Arena

The new Dickies Arena will open its doors to the public this Saturday, October 26. After two-and-a-half years of construction, Fort Worthians will finally be able to see the new arena. 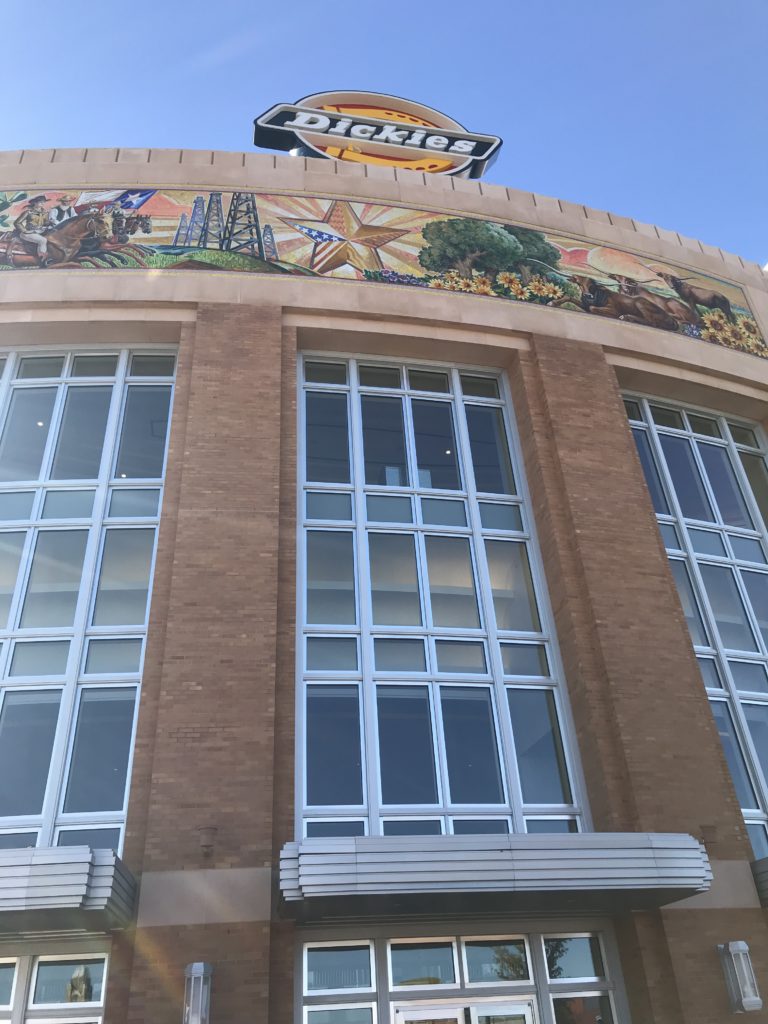 It was worth the wait.

On Monday, October 21, a group of journalists and local press people got a sneak peek tour, given by Matt Homan, President and General Manager of Trail Drive Management Corp. (the not-for-profit operators of the arena), and Brad Barnes, President and General Manager of the Fort Worth Stock Show and Rodeo. The tour started at the north entrance, where we could look down Gendy Street toward the Amon Carter. The architects deliberately echoed the Art Deco façade of the Will Rogers Coliseum, tying the new to the old and unifying the area.

The new arena’s technical aspects are ridiculously impressive. The sound system is so state-of-the-art that when George Strait performs on November 22 and 23, his sound crew won’t have to reinvent the wheel; they will simply plug into the arena’s sound system. And unlike many arenas which have to hang banners and swags of fabric in the rafters to baffle the sound, the arena’s sound baffling is integrated into the roof. No strange echoes or dead spots! 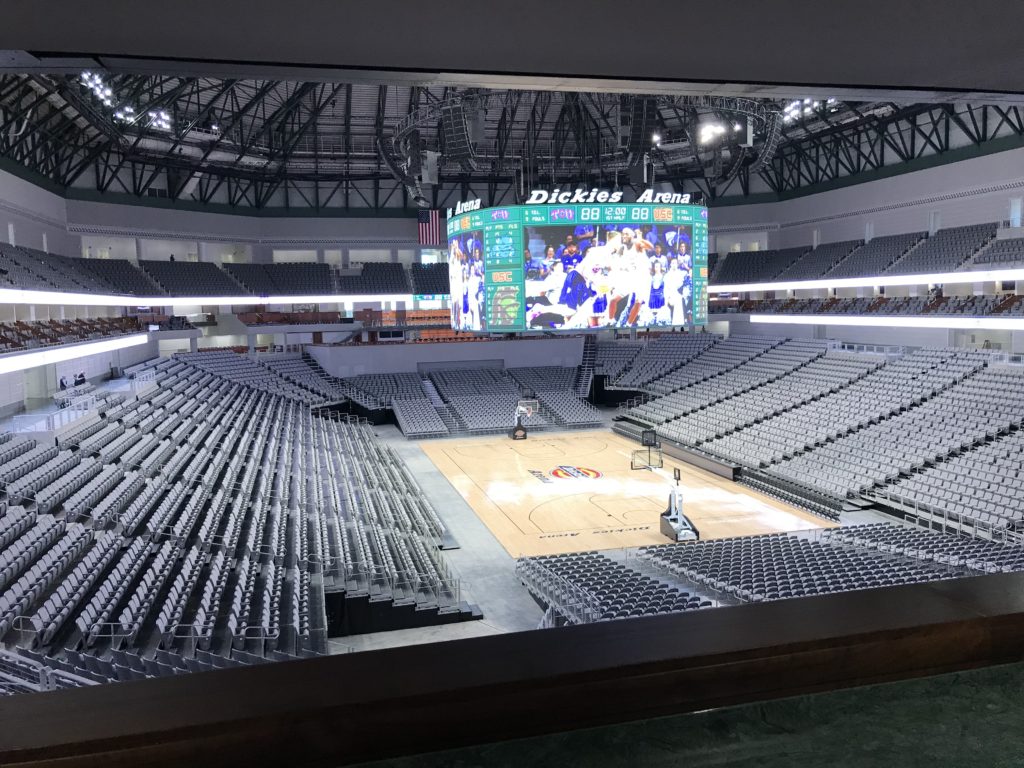 The flexible seating is considered and comfortable. Brad Barnes was quick to point out that, unlike at the Coliseum, all the seating on every concourse level is reaches by walking DOWN instead of trekking up. The stairs are also commodious and pitched at an easier angle to climb, so leave your pitons, ropes, and carabiners at home; you don’t need to rock climb to get to your seats. And the round video board actually has screens INSIDE so that those in floor seats for games and other events can actually see what the score is!

The clubs on the north and south side (Avion and Reliant, respectively) give patrons a chance to enjoy a game, a show, or an event in comfort and style. The Avion Club is full of walnut accents and graceful seating, while the two-story Reliant Club is more modern, with cherry wood and stitched leather accents (stitched by Fort Worth bootmakers M.L. Leddy). 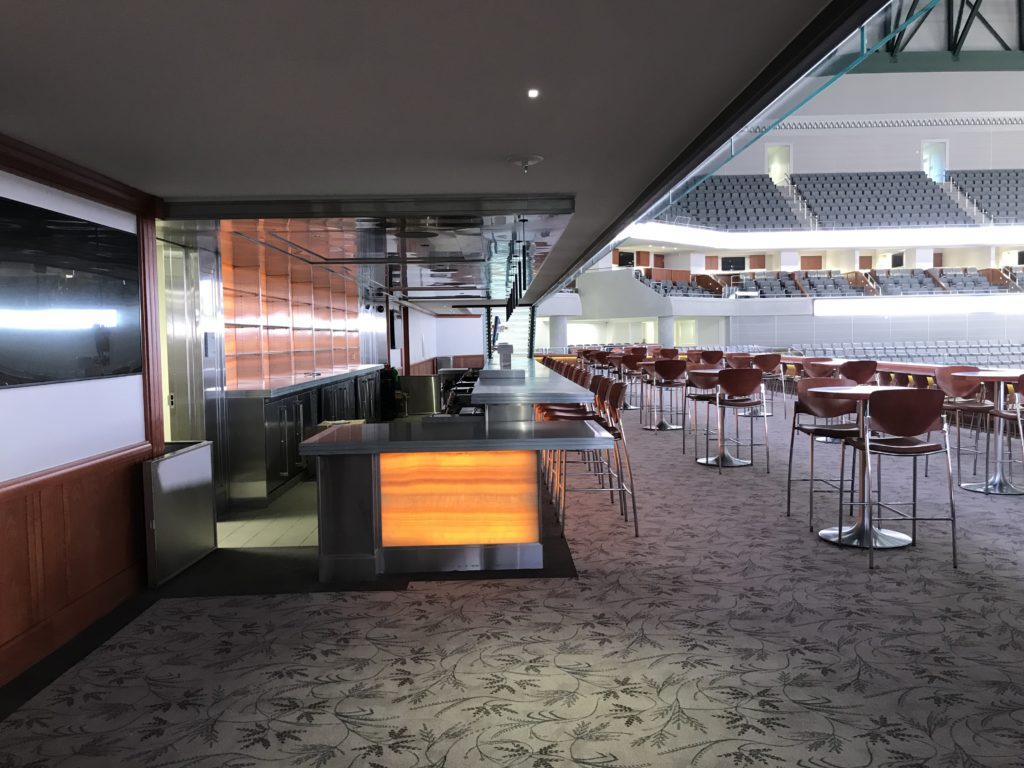 Dickies Arena has made the rather audacious decision to keep catering in house, rather than contract with a big company like Aramark or Sodexo. Patrons will be able to dine on offerings that range from the healthy (couscous salad with dried fruits) to the not-quite-so-healthy-but-quite-delicious (pulled pork parfait – smoked pork, mashed potatoes, and barbecue sauce). Each concession will have a different theme celebrating Fort Worth. And instead of throwing away prepared food, the arena food and beverage service is partnering with the Tarrant Area Food Bank to make sure that nothing is wasted.

On Saturday, October 26, you will have the chance to explore the new arena. At 10 am, there will be a ribbon cutting ceremony on the Plaza, a lovely space on the east side of the arena. Immediately following, the arena will be open for exploring. (Be sure to register for free here!) There will be a variety of activities on the Plaza throughout the day, including a monster truck, performers from Cirque du Soleil, and a Harlem Globetrotter. Food and beverages will be available for purchase at a reduced price. 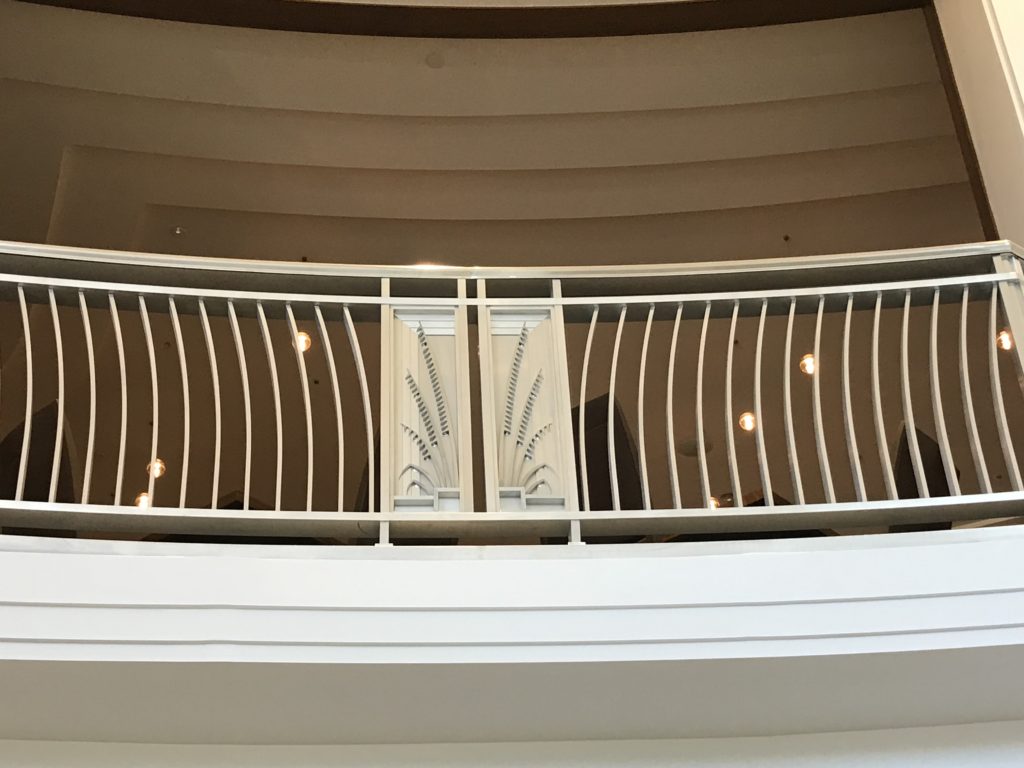 Many of us who grew up going to the rodeo at the Coliseum were sad when we heard of the plans to move to a new arena, but you can rest assured. The rodeo will still be the rodeo, and now, Fort Worth has the arena it needs to attract large venue productions and shows. No longer will we have to drive east. In fact, I predict that there will soon be a migration west!