Play About Amon Carter Back On

Amon Carter’s name is legendary in Fort Worth because his achievements and influence were monumental.

Carter was Fort Worth’s media mogul, who used his newspaper, the Fort Worth Star-Telegram, and his other media holdings, radio station WBAP and the Channel 5, the NBC television, to carry out his vision for the city. 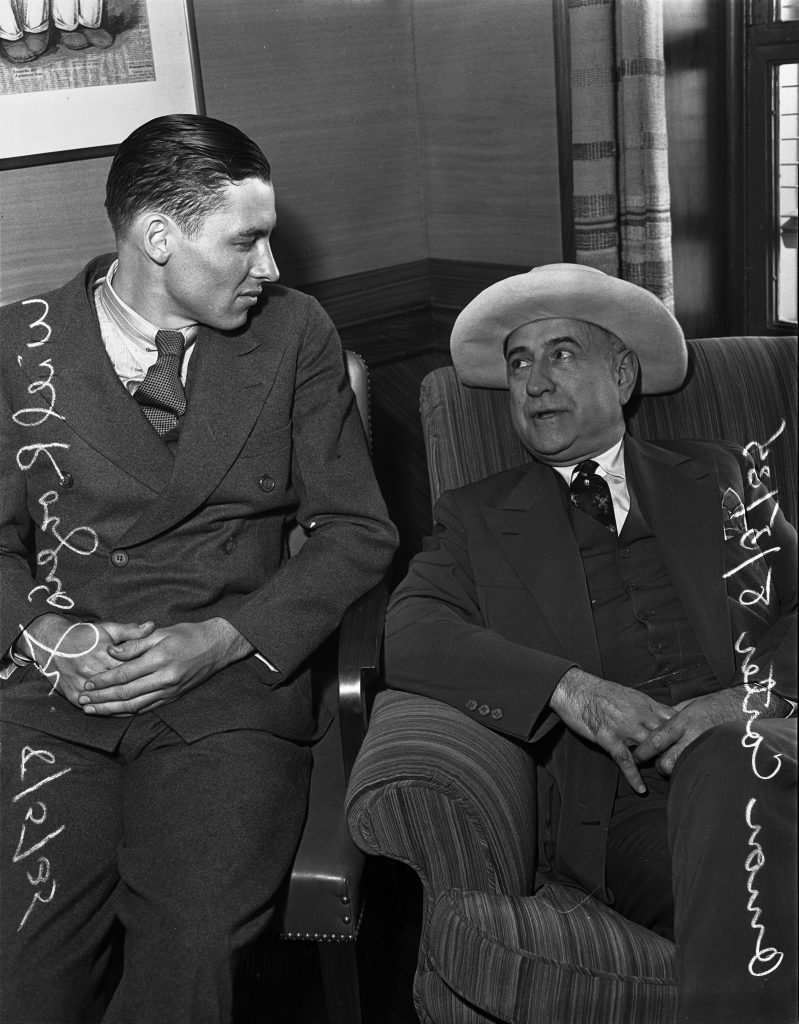 Texas Newspaper publisher Amon Carter tells ex-employee, Will Rogers Jr., about how California is the greatest place in the nation, next to Texas, of course.
Photo from the UCLA digital library and used with permission.

But he was also a character with an outsized personality who loved to dress as a cowboy, who always wore a Shady Oak hat and sometimes carried a six-shooter for effect. Carter was unapologetic about his disdain for Dallas and was known to bring his lunch to avoid spending money in the city when he had to visit.

Carter’s countless contributions to the city include donating more than $620 million in grants to support art and culture, civic and public affairs, education and health, and human services. His influence led to major business transactions, including American Airlines’ move from Dallas, bringing Air Force Plant 4, now Lockheed Martin, and Bell Helicopter to Fort Worth and General Motors to Arlington.

To learn more about Carter’s life and legend, grab some tickets to the return of AMON! The Ultimate Texan, a one-man play written by veteran newspaper columnist Dave Lieber, who also wrote a book by the same name.

Productions were put on hold due to the pandemic.

“We’re tickled that we could pick up where we left off,” Lieber said. “The demand is great. Fort Worth and Texas love their heroes.”

“We’re hoping to extend the current run before we take the play back on the road,” said Lieber, a former Fort Worth Star-Telegram columnist and now the Watchdog columnist for The Dallas Morning News.

The show returns at an opportune time, coinciding with the 100th anniversary of WBAP’s founding, Lieber said.

Nothing about the production has changed. The show is produced by Rick Blair, a co-founder of Artisan, and directed by Connie Sanchez. Retired drama teacher Kelvin Dilks, who originally charmed audiences with his portrayal of Carter, is back again in the role. 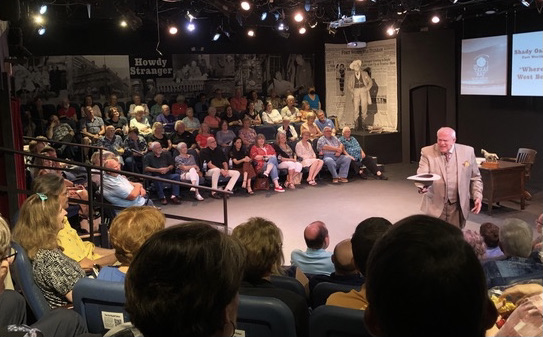 Kelvin Dilks as Amon Carter in AMON! The Ultimate Texan at Artisan Theater in Hurst.
Photo courtesy of FWBP.

Lieber’s fascination with Carter began when he was hired by the Star-Telegram in 1993. Although Carter died 38 years before Lieber arrive in the newsroom, his inquisitive nature as a journalist led him to find out more about the larger-than-life publisher.

Lieber dug through about half of the 444 boxes of Carter’s papers, letters and telegraphs at the Mary Couts Burnett Library at Texas Christian University to weave together firsthand accounts of Carter’s life that are the basis of the book and the play, the centerpieces of Lieber’s Amon G. Carter Sr. Project.

Furthermore, after reading the late Jerry Flemmons’ book, Amon: The Texan Who Played Cowboy for America, Lieber was convinced there was a one-man play about Carter waiting to be written.

Lieber characterizes Carter as a “benevolent director” for his ability to use his media holdings to influence economic development and twist arms for charitable giving to causes he supported.

A native of New York, Lieber was a veteran newspaperman by the time he arrived at the Star-Telegram, where he was struck by the newspaper’s generous financial support to the community, which aligned with his own values of helping those in need.

Lieber attributes that compassion to Carter’s example. As a tribute to Carter, Lieber bought his own Shady Oak hat and wears it often.

“Amon Carter has been dead for 67 years, but his spirit hovers,” Lieber said.

For tickets and more information, visit www.amonplay.com or call the Artisan box office at 817-284-1200.

This article, written by Marice Richter, originally appeared in the Fort Worth Business Press and is shared with permission.