This year the Amon Carter Museum of American Art (the Carter) celebrates its sixtieth year as a free museum presenting the best of American creativity.

Located in the heart of Fort Worth’s Cultural District, the Carter has cultivated a preeminent collection of masterworks by legendary American artists, advanced singular research and conservation, and produced enriching exhibitions and programs since first welcoming visitors on January 21, 1961. For this milestone year, the Carter is presenting a comprehensive exhibition program both honoring the past and exploring the future of American art with exhibitions including Mythmakers: The Art of Winslow Homer and Frederic Remington; An-My Lê: On Contested Terrain; and Imagined Realism: Scott and Stuart Gentling. The museum will also celebrate its anniversary throughout 2021 with a robust offering of events and by unveiling new digital initiatives. 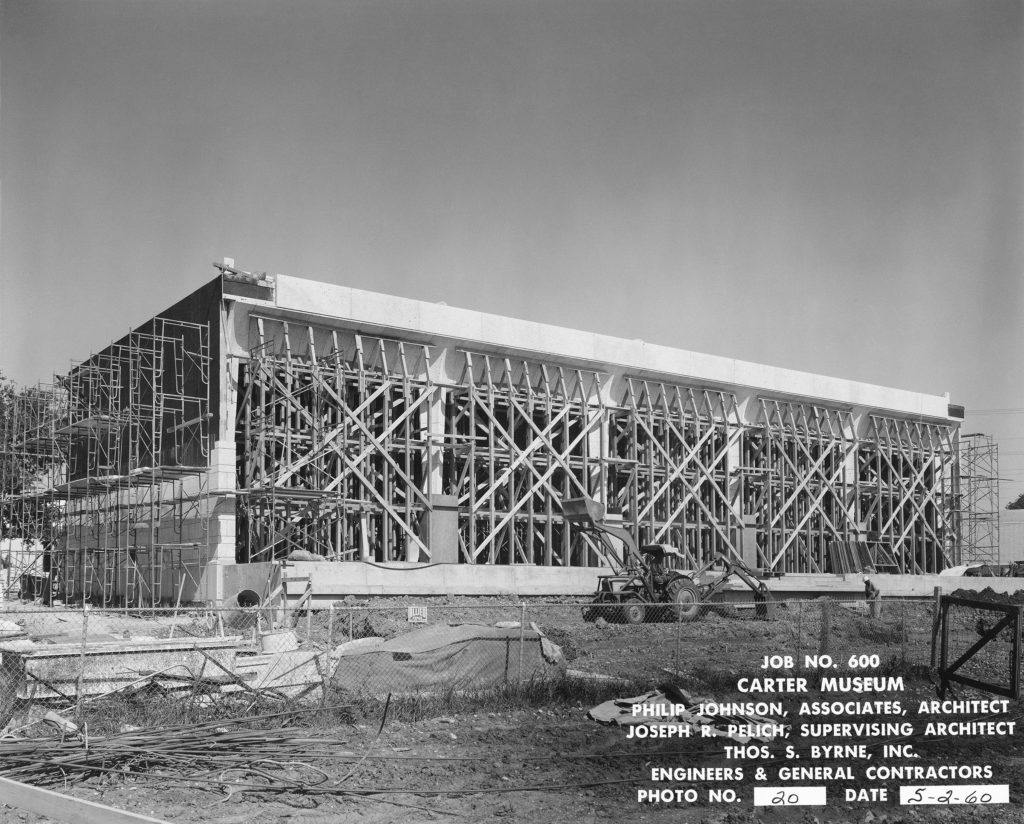 The new museum under construction, 1960. The building was clad with a cream-colored shellstone native to Texas; Johnson then appointed the interior spaces with granite, extruded bronze, and Burmese teak.

From its establishment in 1961 by siblings Amon G. Carter Jr. and Ruth Carter Stevenson to today’s leadership in the study and presentation of American art, the Carter has advanced the values of excellence and accessibility put forward by the institution’s namesake, Amon G. Carter Sr., who provided for the creation of a museum built to serve the community with free access to the best of American art. The museum’s collection has grown from its foundational collection of Mr. Carter Sr.’s western art holdings to a world-renowned institution presenting exceptional paintings, sculpture, and works on paper, and preserving one of the foremost collections of American photography. Exhibitions in 2021 reflect the Carter’s rich history of presenting groundbreaking works from the late 18th century to the present, from Mythmakers: The Art of Winslow Homer and Frederic Remington, revealing new scholarship on two icons of American art history, to An-My Lê: On Contested Terrain, presenting the first comprehensive survey of the celebrated photographer. Throughout the year, the exhibition and commission of new contemporary works will continue the Carter’s tradition of supporting living artists. In addition to the work of An-My Lê, exhibitions will highlight new work by living artists including Natasha Bowdoin, Anila Quayyum Agha, and more, ensuring that the Carter continues to tell the story of American art’s past while also cultivating its future.

“In sixty years of fostering intimate and meaningful encounters with American art, the Carter has become an important cultural resource for Fort Worth and the global arts community alike,” said Andrew J. Walker, Executive Director. “Our 2021 anniversary program—from exploring an important new acquisition by Thomas Moran to hosting Anila Quayyum Agha’s immersive, multimedia installation illuminating the modern American experience—exemplifies our ongoing commitment to telling the evolving story of American creativity. While we celebrate the accomplishments of the past six decades, we also look ahead to building on the Carter’s legacy of innovative programming and pivotal scholarship in American art.”

View of downtown Fort Worth from the Carter’s mezzanine galleries, 1961, Photo courtesy of Amon Carter Museum of American Art

The 2021 exhibition schedule highlights the Carter’s sixty years of exploring the history of American art through scholarship, stewardship, and collaboration with contemporary artists. The beginning of the year features the final two months of the Carter co-organized, nationally touring exhibition Mythmakers: The Art of Winslow Homer and Fredric Remington. The exhibition introduces new scholarship on one of the iconic artists included in the museum’s founding collection, Remington, and examines for the first time the commonalities in themes, technical processes, and artistic sensibilities of these two major figures in American art.

Exhibitions premiering in the 2021 anniversary program include:

April 18–August 8, 2021
An-My Lê: On Contested Terrain is the first comprehensive survey of the work of Vietnamese-American photographer An-My Lê and continues the Carter’s long history of presenting work by significant living artists. Featuring a selection of photographs from five of the artist’s major bodies of work, this nationally touring exhibition considers the photographer’s nearly 25-year career exploring the edges of war and recording these landscapes of conflict in beautiful, classically composed photographs.

The Carter is home to one of the foremost repositories of American photography, with a collection of over 45,000 exhibition-quality prints and 250,000 photographic objects spanning the history of the medium—from one of the earliest American daguerreotypes to contemporary inkjet prints by living artists. Photography Is Art showcases the museum’s renowned collection with a presentation of 41 prints telling the story of American photographers’ efforts to explore the creative possibilities that lay beyond the medium’s documentary function and their campaign to proclaim photography an art form.

An Expanding Vision: Six Decades of Works on Paper

Celebrating the sixtieth anniversary of the founding of the Carter, An Expanding Vision: Six Decades of Works on Paper revisits the museum’s history of collecting works on paper and highlights  its development into one of the country’s significant holdings of works on paper, including complete sets of works by George Bellows and Stuart Davis, as well as over 2,500 prints from the Tamarind Lithography Workshop (now Tamarind Institute). The exhibition highlights key moments of collecting in the past sixty years, including acquisitions of work by artists such as Mary Cassatt, Glenn Ligon, Louise Nevelson, Kara Walker, Charles Wilbert White, and more.

Welcoming a major new acquisition to the Carter’s collection, Thomas Moran’s Mount Superior tells the story of 19th-century western industrialization through an important, midcareer watercolor by one of America’s best-known landscape painters. Highlighting the museum’s recent acquisition of Mount Superior, as viewed from Alta, Little Cottonwood Canyon, Utah (ca. 1879) by Thomas Moran, the exhibition brings together photography, works on paper, and popular culture from the period while documenting a rarely explored time of Moran’s career.

Commissioned by the Carter, multidisciplinary artist Anila Quayyum Agha will create an immersive, site-specific sculptural installation informed by her multicultural, migrant experience. Using metal armatures of open geometric and curvilinear designs to encase a single light source, Agha will produce a meditative space filled with ornate patterns of light and shadow. Bridging modern and traditional materials with historic and contemporary meanings, her installation at the Carter will be accompanied by a new series of drawings that incorporate textile processes like wax, dyes, and embroidery to reposition practices of traditional domestic servitude as a fine art form. The exhibition continues the museum’s history of telling the complex stories and identities that have defined American art history as well as supporting artists who are reinventing traditional modes of works on paper. 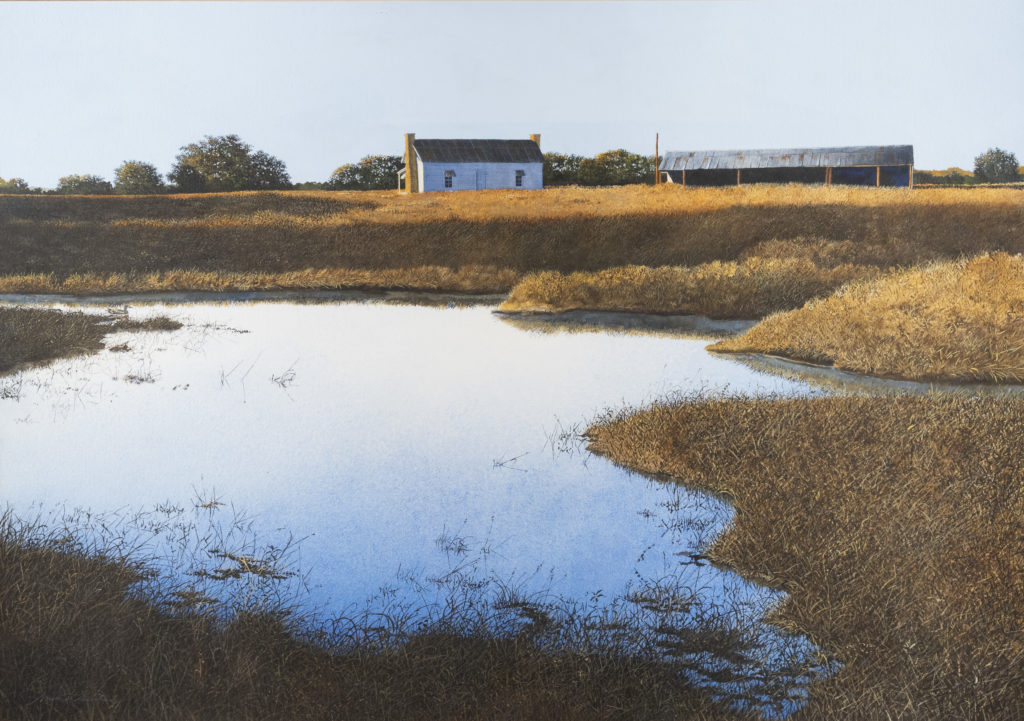 Imagined Realism marks the first comprehensive retrospective of Fort Worth artists Scott and Stuart Gentling. Featuring more than 150 works and archival objects, the exhibition is part of a multiyear initiative to further the scholarship and research on these two artists, which began in conjunction with the establishment of the Gentling Study Center at the Carter in 2019. Imagined Realism demonstrates the Carter’s longstanding work with Texas artists to contextualize the practices of local and regional art within the American canon. The exhibition is grounded by the museum’s extensive archival collection, which is dedicated to preserving artistic legacies. 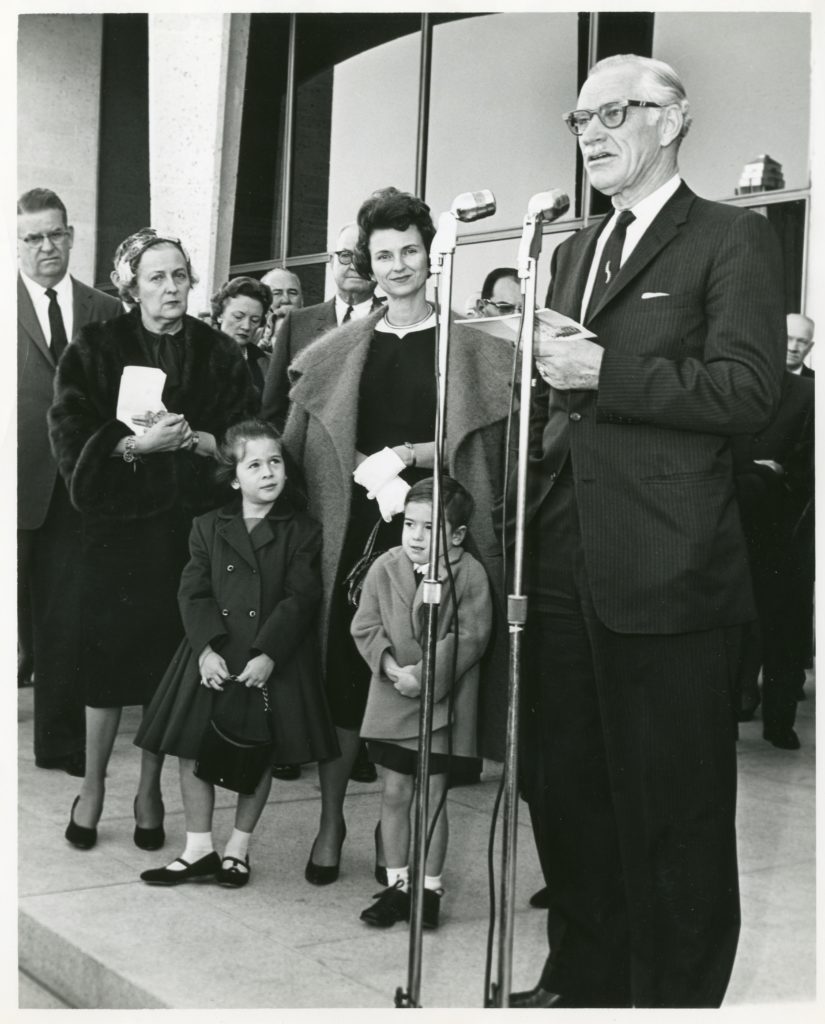 Over the course of the year, the Carter will celebrate the museum’s anniversary with a variety of events that encourage creativity, connection, and appreciation of art history. From artist talks to a craft cocktail series to family art workshops, there are fun anniversary events for all ages throughout the year. In late September the museum will host a 60th Birthday Bash, with six hours of art-inspired activities to celebrate the six decades of the Carter. Visitors can expect live music, art making, experiences with artists, activities in the galleries, local food trucks, and more. Details on the 60th Birthday Bash will be announced later this spring as the Carter continues to monitor guidelines and recommendations of health and government local officials in response to the pandemic. More information on all events in 2021 will be available at cartermuseum.org/events, including dates, descriptions, and ticketing.

Also marking the anniversary year, the Carter is expanding access to its resources through new digital initiatives. The recently launched updates are the culmination of a multiyear initiative to enhance the museum’s website and access to its renowned collection. The collection pages feature optimized design and search capabilities allowing for heightened explorations of the museum’s art collection and archives, featuring hundreds of thousands of objects. The improved online collection database also marks the completion of the museum’s 2017 Institute of Museum and Library Services (IMLS) grant supporting the digitization of the Carter’s holdings of eight photographer archives: Carlotta Corpron, Nell Dorr, Laura Gilpin, Eliot Porter, Helen Post, Clara Sipprell, Erwin E. Smith, and Karl Struss. Also featured on the website will be a series of virtual gallery experiences providing additional insight and knowledge on special exhibitions and the museum’s collection galleries.