The Bank of America Tower in downtown Fort Worth was buzzing as tenants gathered in the City Club recently for a Hive to Honey Jar Workshop to harvest the honey from City Center Fort Worth’s urban beehive.

Last May, approximately 50,000 Italian honey bees moved into a hive on the second-floor patio of the Bank of America Tower and they’ve been creating quite the buzz. In service to Queen Beeyoncé, the workers have been busy bees all summer, spreading out to collect nectar from plants within a three-mile radius of the downtown towers.

“Based on the types of flowers the bees forage on, the honey can look drastically different,” explained Alveolé Beekeeping Team Manager Michelle Winter, who tends to City Center’s hive. “The honey can be super dark or very light. It might taste minty or really sweet. Some of the blooms the bees forage on around here include dandelions, clover and similar wildflowers. While many people regard these plants as weeds, they are very important to the bee population and other pollinators like butterflies.” 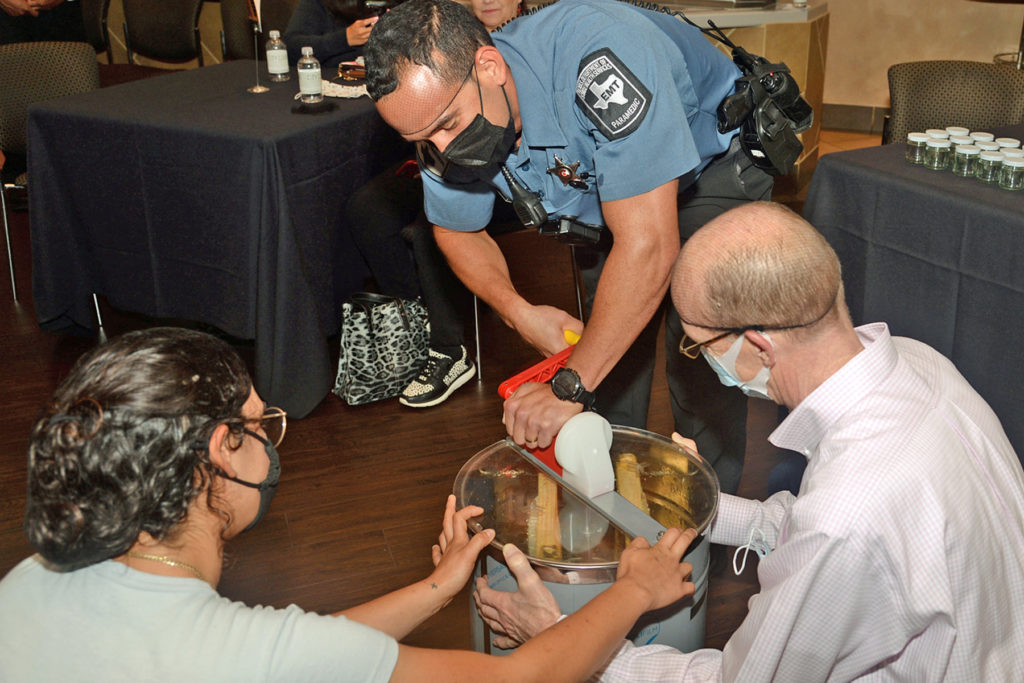 Several tenants volunteered to help harvest the honey, which included removing the wax caps that seal the honey inside, which was done by lightly scraping an uncapping fork over the caps to remove the beeswax. Once both sides of the frames were scraped, they were slotted into a centrifugal spinner, which is a large stainless-steel drum that spun the frames at a high speed, flinging the honey out of the cells and onto the walls of the drum. The honey slid down the walls to the bottom of the drum where it was removed via a tap.

City Center Security Officer and state-licensed Paramedic Dell Guy had the honor of tapping the first jar of honey. Two of the wooden frames produced enough honey to fill 30 small glass jars. Each of the workshop participants left with a jar of the amber-colored honey. City Center’s hive will continue to produce honey throughout the summer. The hive should yield about 30 pounds of honey this year.
“Our partnership with Alvéole has been very inspiring,” said Johnny Campbell, president and CEO of City Center Management. “We expect to harvest several hundred jars of honey from our hive this year. We’ll give some away to tenants and make some available for purchase for tenants or members of our community. We’re also giving some to the City Club Grill and 203 Café for them to use in a few signature dishes.” 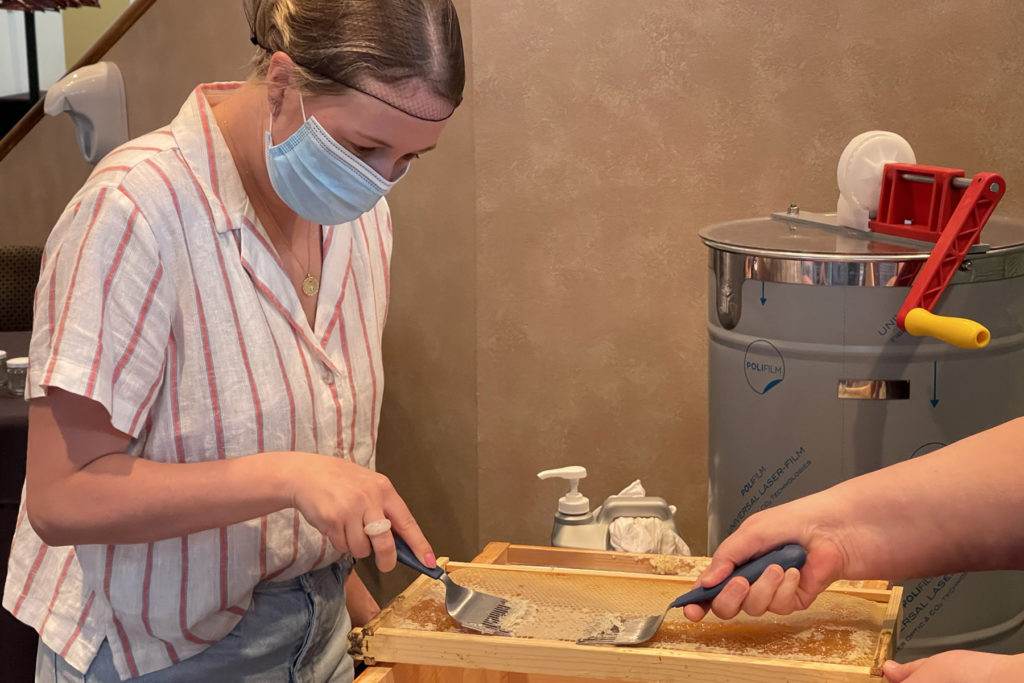 Urban beehives like the one at City Center are very important because of the serious decline in the bee, butterfly, and bumble bee populations around the world. Pollinators face threats from industrial agriculture, such as the massive use of pesticides and habitat loss, as well as climate change. Last winter was especially hard on the bee population in Texas due to the severe and prolonged freeze we experienced.

Pollinators are responsible for the pollination of more than 130 varieties of fruit and vegetables, nearly a third of the food we eat. The installation of the beehive at City Center required minimal resources, but delivers enormous benefits, notably social and ecological. This urban beehive has repurposed an unused space as well as helping educate the community.

Alvéole has partnered with more than 100 schools and 500 companies to create awareness about biodiversity, food production and ecosystems. Since its inauguration in 2013, Alvéole has reached more than 25,000 people of all ages through its beekeeping services and educational workshops. More information is available at www.alveole.buzz 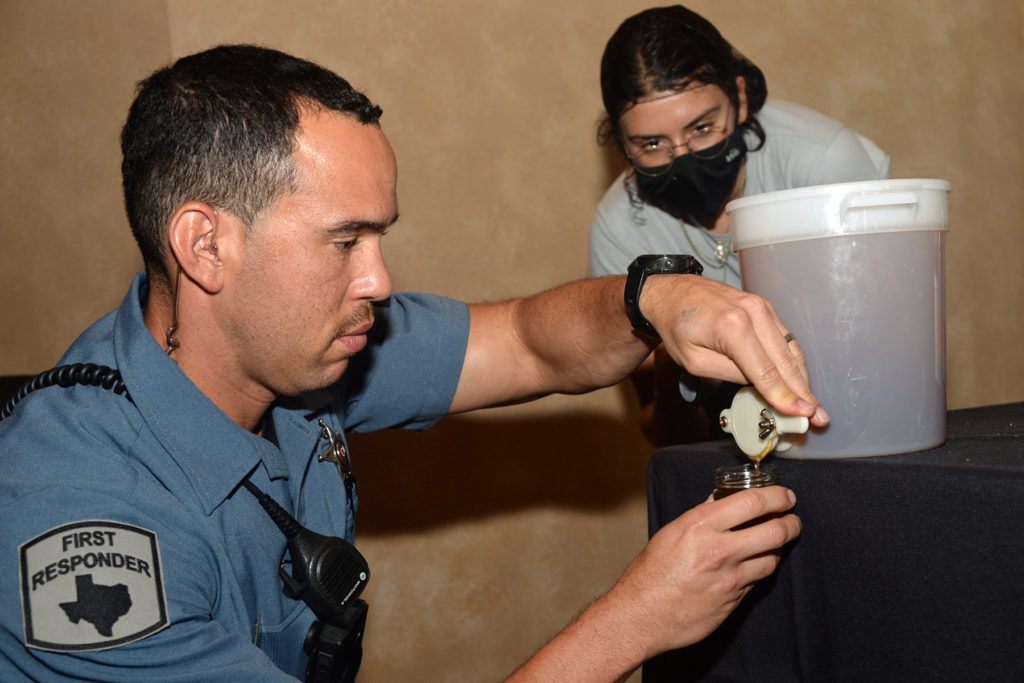 City Center is the premier business address with Class A office space in downtown Fort Worth. Comprised of the Bank of America Tower and the Wells Fargo Tower, the two iconic towers offer stunning views of Fort Worth, connected parking and an on-site private club with fitness center. More info at citycenterfw.com

BY THE NUMBERS AND INTERESTING FACTS 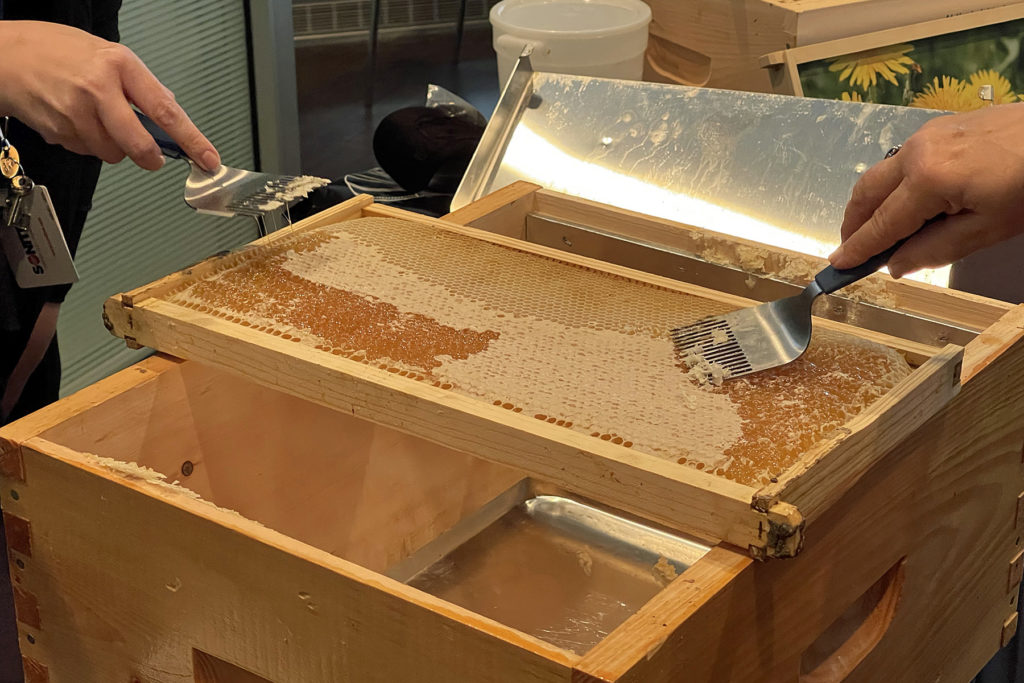