Camp Bowie District has announced the commencement of a $400,000 beautification project along the 6700 – 7000 blocks of Camp Bowie Boulevard. The organization was awarded a Green Ribbon Grant to improve the medians and landscaping along the far west stretch of The Boulevard. The project is the culmination of two years of partnership with the City of Fort Worth – Parks Department, Texas Department of Transportation, Phillips Landscaping, Freese & Nichols, Inc., and Camp Bowie District.

The project will be guided by the Camp Bowie District Beautification Committee, which oversees and advises the Board of Directors on items related to beautification and maintenance of the public spaces, medians, and other green areas along Camp Bowie. The committee has selected a variety of hearty and drought resistant plantings that will not only be visually appealing but represent a renewed spirit along this neglected stretch of Camp Bowie.

The planning and design include multi-layer landscape planting and irrigating enhancements within the TxDOT right-of-way. The enhancement areas are located between Pelham Road and Marks Place. Median improvements include shrubs, ornamental grasses, groundcover, mulch, and an underground irrigation system. The project will be state let and will utilize TxDOT FY 2020 Green Ribbon funding for construction. 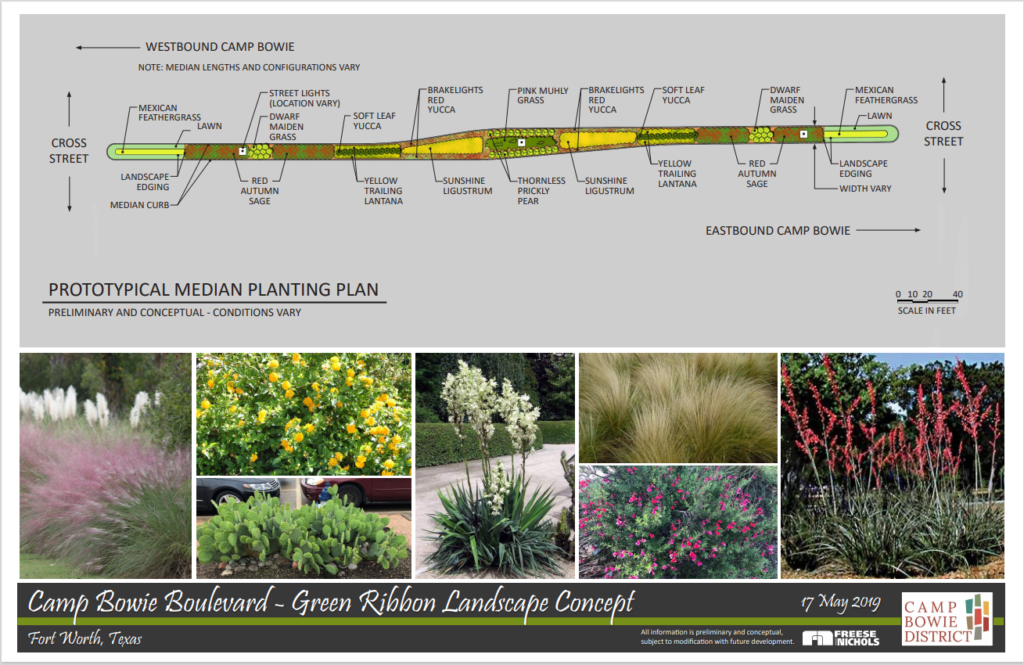 “We are excited to see the final product but even more enthusiastic to see what new businesses will seek out this area because of the improvements,” said Wade G. Chappell, Executive Director for Camp Bowie District.

In addition, the organization has moved forward with the nomination of Mark Harris as the new Chairman of the Board of Directors. Harris, who joined the Camp Bowie District board in 2015, succeeds Mark Phillips, who served on the board for seven years, and three years as Chairman. 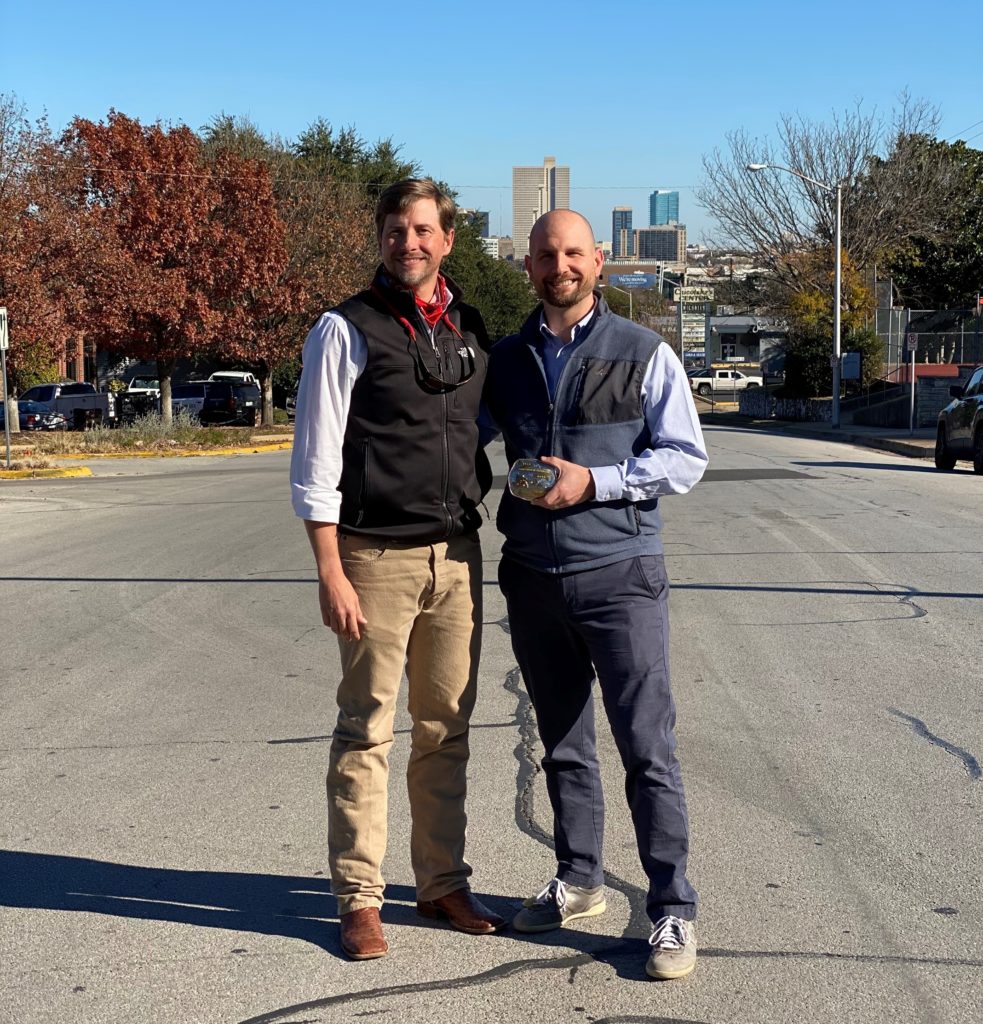 In true Fort Worth fashion, the passing of the Chairman was celebrated by the Board of Directors gifting Mark Phillips a luxury belt buckle, for his hard work and dedication over the past few years.

The new Board Members have officially been voted into the Board of Directors for Camp Bowie District.

Chris Holbert is a lifelong Fort Worthian who grew up on the bricks of Camp Bowie Boulevard.  As a graduate from Arlington Heights High School and TCU, Fort Worth runs through his blood. After graduating from TCU Chris went on to obtain his law degree from the University of Tulsa Law School and now currently practices commercial transactional law at Axiom Law. He has most recently served as Ridglea Hills Neighborhood Association Board President, as well as the Chairman of the Ridglea Area Neighborhood Alliance.  He is also newly appointed to the Fort Worth Library Advisory Board as Vice-Chairman by Councilman Brian Byrd, as well as the Z-Boaz Park Advisor Committee. Chris currently lives in the Ridglea area with his wife Christa, and their two children.

C.B. Team is a 5th generation and lifelong Fort Worth resident. With a degree from The University of Texas at Austin, C.B headed right back to Fort Worth after college. He has worked in real estate at Ellis & Tinsley, Inc. as an Associate since 2006, and was named Partner and Principal in 2013. C.B. has been appointed to various City of Fort Worth boards such as the Development Advisory Committee and District 3 Appointee serving as its Chairman.  Currently C.B. serves on the city’s Aviation Advisory Committee.  For his leadership contributions, C.B. was awarded the REALTOR Spirit Award by The Greater Fort Worth Association of Realtors and is a former Forty Under Forty Honoree by the Fort Worth Business Press. C.B. lives in Fort Worth with his wife, Lauren, and their two children.

Luke Syres is a California native who moved with his wife and two kids to Fort Worth in 2011. From a young age, Luke’s pursuits included architecture, photography, drawing, playing music, and a self-taught skill capacity for web development. Coming from an entrepreneurial family, Luke exhibited a passion for innovation, precision and calculated risk taking. Luke’s career initiatives include launching a mortgage company, marketing for a design/build luxury home remodeling businesses and serving the IT and online marketing demands of a large, local North Texas real estate company. In 2016, Luke helped launch LEAGUE Real Estate where he is co-owner and creative director of Marketing & Technology. In 2018, LEAGUE moved into the original westside schoolhouse off Pershing. Luke and his family reside just blocks from the Camp Bowie bricks.

Kelly Smith is also a native to Fort Worth, and a restauranteur.  Her parents founded the local Tommy’s Hamburger restaurants in 1983. She received her B.S in Education from Texas Wesleyan University in 1990, where she played on the tennis team. She went on to teach junior high in the Eagle Mountain-Saginaw ISD for three years. Smith came back to the restaurant business full-time after receiving her Master of Liberal Arts degree from Texas Christian University in 2001. Kelly has served on the President’s Advisory Council at Texas Wesleyan University and Board President of AIDS Outreach Center. Smith currently owns and operates the three locations of Tommy’s Hamburgers with her wife, Holly Edwards.

Bo Trainor is from Winona, Minnesota, having moved to Texas as a child. With a background in civil engineering, Bo now works at Peloton Land Solutions after previously working for several other small engineering firms. He has researched over 500 different sites in the metroplex, throughout Texas and the surrounding states, and served as the Co-Chair on the Tarrant County Advisory Committee.  He also currently serves as the Tarrant County Sponsorship Committee Chair, serves on the North Hi-Mount Neighborhood Development & Zoning Committee, and serves on the City of Fort Worth’s Development Advisory Committee- which is a 2-year appointment from the City Manager’s office.  Bo lives with his husband in their 1926 California Bungalow in the North Hi-Mount area.

Mark Harris has served on the Board of Directors for Camp Bowie District for five years now. Mark founded Fort Worth company 8 Feet Development, a commercial real estate development company that preserves, repurposes, and leases older buildings. An affiliate of James R. Harris Partners, the company specializes in adding value for its investors by saving and repurposing classic but underutilized buildings. Through the years, Mark has established long-term relationships with tenants and vendors. He has built a strong foundation of business based on loyalty and family. Active in industry affairs, he is currently a Certified Commercial Investment Member candidate and a member of the Urban Land Institute, the International Council of Shopping Centers, and the Society of Commercial Realtors of Fort Worth. In the community, he serves on Camp Fire USA’s Outdoors Development Programing Board and on the First Presbyterian Church’s Fort Worth Property Committee.