A Tale of Two Galas

Friday, April 8th, 2022, was a night of extensive fundraising for the arts in Fort Worth. While 60s: Peace, Love & Casa Mañana was taking place at their iconic domed theater, the 60th anniversary Classically Cliburn New Orleans-themed fête was happening less than a mile away at the other end of the Cultural District complex in the Simmons Bank Pavilion at Dickies Arena. With both organizations emerging from a two year pandemic gala hiatus, the stars aligned for April 8th to be the perfect night to exceed fundraising expectations in Fort Worth. 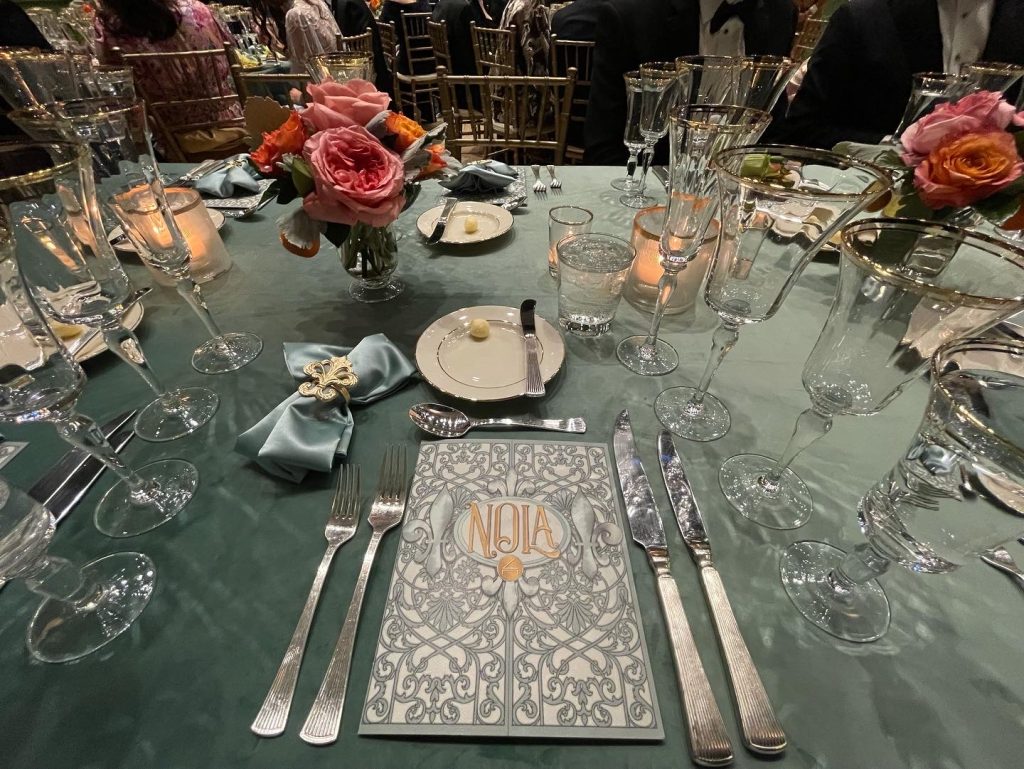 At 6:00 PM, 60s: Peace, Love & Casa Mañana kicked off with just under 300 attendees who dressed in their grooviest attire to exceed the night’s fundraising goal, with over $350,000 raised to go towards their mission to continue live performing arts in the Fort Worth community. Guests decked out in hippie flower dresses, bell bottoms and Lennon-esq purple sunglasses danced to Pete’s Dueling Pianos in the Claudia Stepp Grand Lobby, and were also treated to a special performance of The Music of Laurel Canyon in the Reid Cabaret, which runs through this Friday, April 16th for all who were not able to attend the gala. The event was catered by Chef Juan Rodriguez’s Magdalena’s. Co-Chairs for the event were Madolin Rosenthal and Kendall Kostohryz, and also in attendance was Fort Worth Councilmember Michael Crain. Rozanne Rosenthal, as well as Corrie Watson of Frank Kent Cadillac and Cadillac Wines were also seen enjoying the evening. President of Casa Mañana’s Board of Directors Dana McCallum was there mingling with guests, and told me that the night was fun and very successful.

Just down the road at 7:30 PM, I attended the Classically Cliburn Gala where around 575 attendees gathered in the Simmons Bank Pavilion at Dickies Arena for a joyous night of dinner and dancing to celebrate the 60th anniversary of the Van Cliburn International Piano Competition. Also delayed by the pandemic, the competition is set to take place this June 2-18 in Fort Worth. 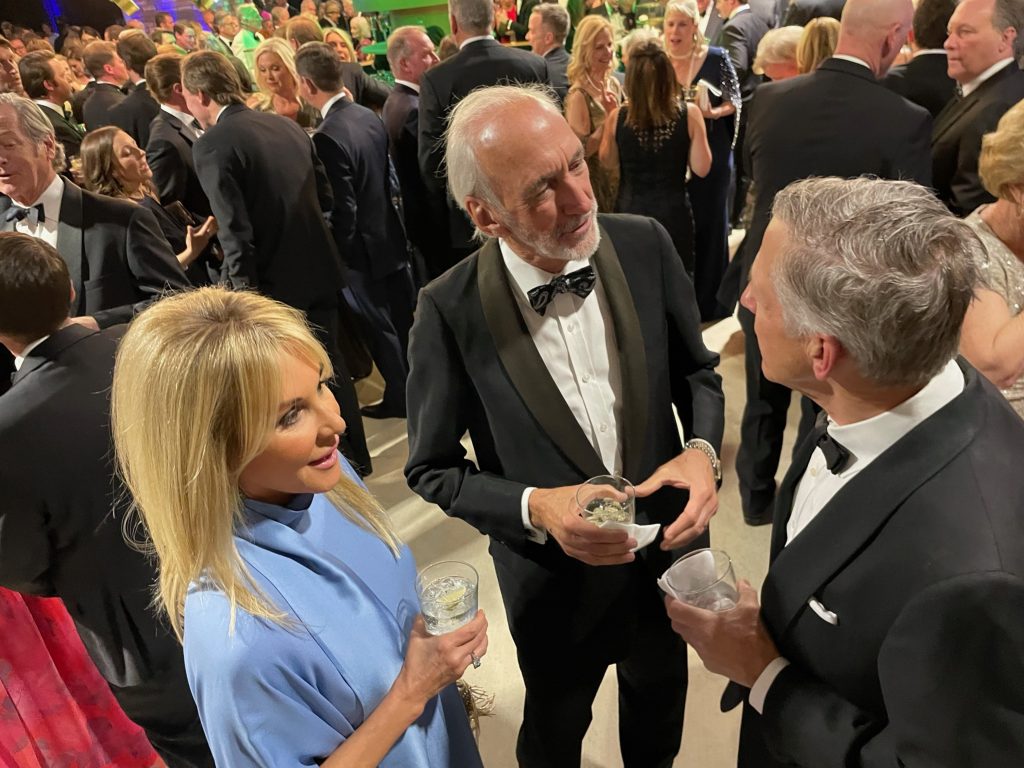 The Cliburn Gala was co-chaired by Jennifer and Phillip Williamson, with honorary chairman Gail Rawl. The foyer of the Simmons Bank Pavilion was decked out with an antique carousel bar that took you right to New Orleans to the Hotel Monteleone. Seen before the dinner began were Elaine Agather and Cliburn president and CEO Jacques Marquis, as well as Thomas Smith and Brent and Elisabeth Hyder. Fort Worth artist Nancy Lamb wore a beautiful purple tulle dress and was seen taking her quintessential party photos as guests enjoyed cocktails before dinner.

Patrick Sheridan, partner at Bonds Ellis Eppich Schafer Jones LLP, has been a member of the Cliburn 180⁰ social group for arts-minded professions for the last five years and has attended all of the Cliburn Galas since then. Sheridan said that “The Cliburn really did a great job with the entry and transition into the open and beautiful dining area, and since Simmons Bank Pavilion at Dickies Arena is made of wrought iron with the glass up above, you could really feel the early 1900s opulence in the ballroom.”

Inside Simmons Bank Pavilion, the perimeter of the lavishly decorated dining room was adorned with French-green lattice crowning a white circular rendition of the iconic Cliburn piano-made-of-his-initials logo. The room was filled to the brim with sky-high arrangements from Three Branches Floral that jutted upwards to the clerestory, where one could gaze at the sky as the sunlight dwindled and the magic of the evening commenced. 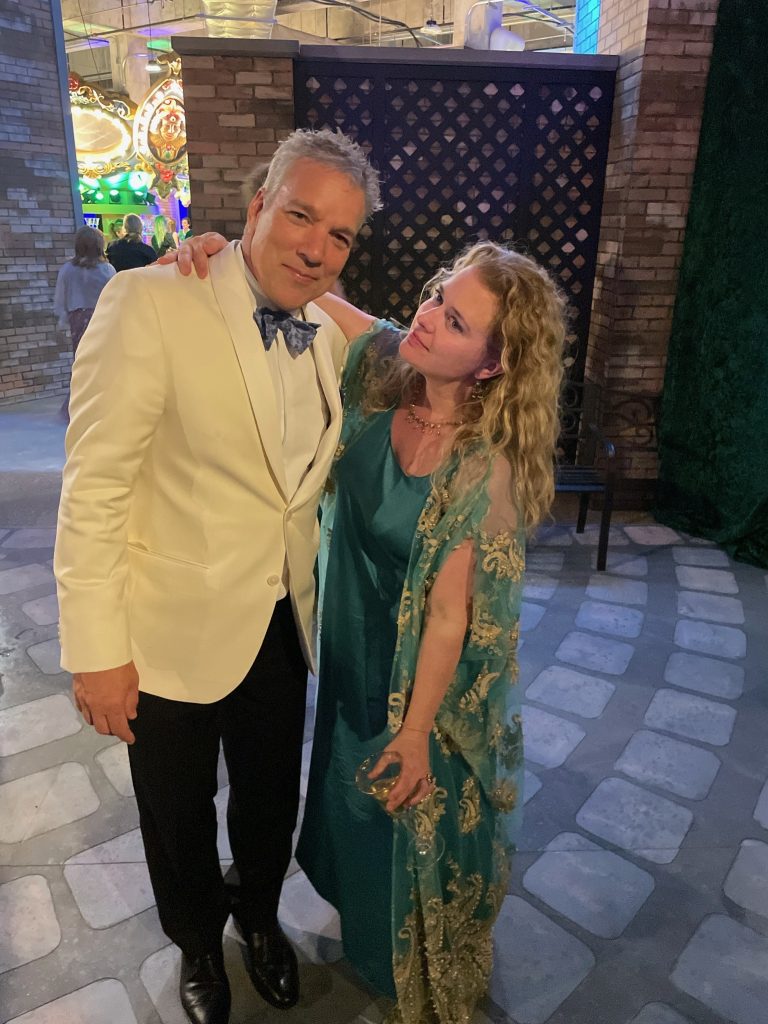 Ryan Lathan said “Hats off to the Cliburn and Kay Howell. Last Friday’s Gala was truly an unforgettable evening of NOLA flair and Fort Worth charm, an elegant night filled with some of the city’s most prominent philanthropists, cultural luminaries, and arts patrons. From that charming Carousel Bar to the powder-sugared beignets, every little detail was divine.”

Seen enjoying the fabulous evening was Mercedes Bass, Cami Goff, Rob Schumacher, Olivia Kearney, and Jane Weir, who has been a member of Cliburn 180⁰ for seven years and has attended five galas. WFAA anchor Meredith Land was also spotted enjoying the festivities. Towards the end of the evening near the carousel bar, I chatted with Christopher Darden, a comedian living in New York who flew in for the occasion. 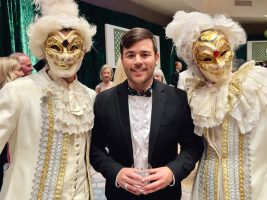 Justin Anderson is an entrepreneur raised in the swamps of Houston who is passionate about connecting with people and making good food. After planting his stake in Fort Worth and attending TCU, he launched his second successful food brand, WOATS Oatsnack. Justin is the Olympics and Happenings Correspondent for Madeworthy, a longtime resident of downtown Fort Worth, and you can find his new Bel Air Ranch Herb & Spice Seasoning Rub in select fine meat markets in Fort Worth.