The Father of Frogball

Summer and baseball are synonymous. You’d be hard pressed to name a more American activity – except maybe apple-pie eating contests. 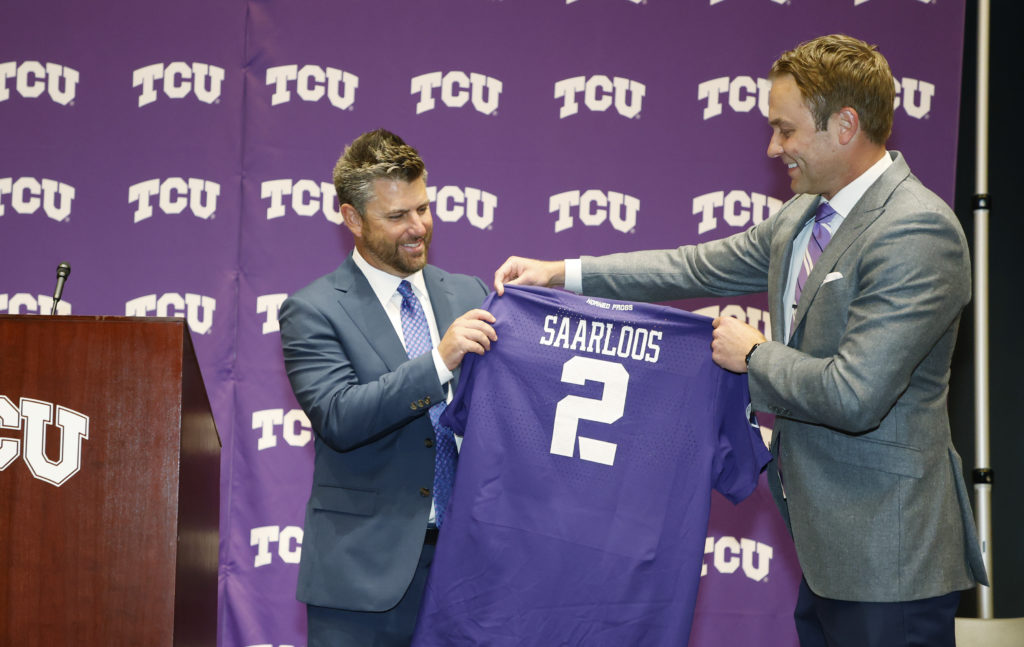 Just in time for summer, Fort Worth has crowned a new king of baseball. TCU announced Kirk Saarloos as the new head baseball coach on June 15. Despite numerous demands from media outlets and a full recruiting season ahead, Saarloos spent the weekend following the announcement celebrating his 19th anniversary with his wife Kristen by vacationing at Barton Creek outside of Austin.

The Father’s Day holiday is a no-recruiting weekend for the NCAA, but rest is in short supply for the couple who met thanks to a blind date contrived by the coach’s cousin during their college days. In addition to raising three children – Brady (14), Emery (11), and Lane (7) – their extended family of more than 35 adopted college-aged sons keeps life moving fast.

An All-American pitcher for Cal State Fullerton, Saarloos is a relief pitching specialist who spent seven years with Major League Baseball playing for the Astros, the Athletics, and the Reds. Saarloos might be new to the role of head coach, but his talents for coaching and recruiting have been appreciated by Frog fans since he joined the staff as an assistant back in 2013.

Friends wishing to congratulate the new first family of baseball will have to wait; July’s recruiting obligations demand Saarloos hit the road to find the next generation of TCU players to take the diamond. While Kirk is on the road in the summer, Kristen uses the time to return to her hometown of Seattle to connect with family and enjoy a reprieve from Fort Worth’s trademark heat.

“She’s a single mom most of the time; a lot of times she’s good cop, bad cop, everything,” Saarloos said of his wife. “[She’s] phenomenal in terms of being supportive, and [she does] a great job raising our kids.” 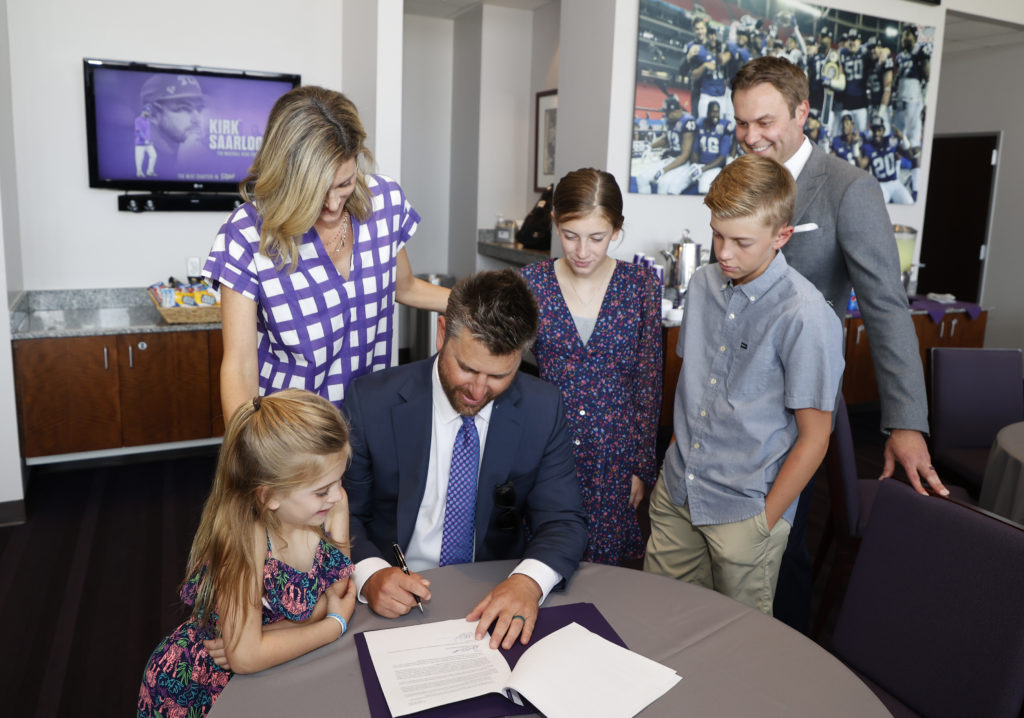 When home, Saarloos’ tries to be as present as possible. The cell phone, which Saarloos called his best friend and his worst enemy, is something he avoids during quality time. Family nights and unscheduled evenings, when possible, are a must for the Saarloos crew.

Even with his demanding job, the new head coach believes in dedicating individual time to each of his children. Lane, who Saarloos calls his Texas Tornado (and the only native Texan in the bunch), will sometimes join her dad on team road trips without Mom or siblings in tow. “She doesn’t lack confidence and [she] loves being around the players,” Saarloos said of his youngest.

When he is asked by parents how to best prepare their children for a shot at collegiate or professional athletics, Saarloos has two words of wisdom: “Play everything.” As a former three-sport high school athlete, Saarloos understands that parents want to give their children to excel, but he remains adamant about the value of letting kids try anything they’re interested in without finding a single focus too early. “That way when you do want to specialize, maybe late in high school, you’re already a really good athlete.”

“Play everything” is especially important considering the meteoric rise of overuse injuries in teen athletes who have played only one sport or position through several consecutive seasons. The former major leaguer credits part of his career to his experience in a variety of sports; playing different sports and positions gave him a competitive edge. “You can get hurt doing anything. Play it all, have fun, be a kid.”

The coach also cautioned parents against expensive national travel leagues and applauded the quality of Texas’ in-state tournaments. “If [they’re] good, your kid is going to be found,” Saarloos asserted. Due to the accessibility of social media and HUDL (a sports-specific scouting and recruiting software), “there are no hidden gems; everybody knows about everybody.”

When asked about his coaching style, Coach Saarloos said that he approaches coaching the same way he tries to be a husband and a father. 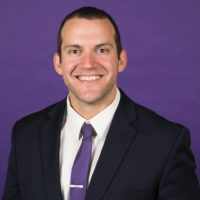 Buck Elliott is a DFW native and graduate of TCU and UTA. He’s also an alumnus of Joe T. Garcias. During the day, he’s a full-time teacher and varsity tennis coach at Denton’s Billy Ryan High School. After hours, he’s usually at home spending quality time with his wife, TWM’s own Jackie Elliott, or his three rambunctious children. Otherwise, he’s acquiring a new injury at a local CrossFit affiliate, or writing his sports column for The Fort Worth Weekly. His love for TCU and educational policies fuel his passion for writing about sports, social justice, and everything in between.