The most wonderful time of the year has arrived in Fort Worth! And boy, does Fort Worth have a lot of festive fun to offer you and your family this month! Look below at this month’s Fun in the Fort calendar and get ready to make some spectacular memories this wonderful holiday season.

The late author/illustrator Maurice Sendak might best be known for his beloved 1963 children’s book, “Where the Wild Things Are.” Available Nov. 13 to Jan. 31, visitors to the Fort Worth Public Library’s Central location in downtown can experience Sendak’s imagination through a display of original artwork and interactive activities inspired by his work. The book remains a popular one nearly 60 years after it was published, along with hundreds of other titles he wrote and/or illustrated.

Join Ballet Frontier for the magic of “The Nutcracker” this holiday season at Will Rogers Auditorium December 3-5. Tickets start at $35.

For KING & COUNTRY at Dickies Arena

Explore Log Cabin Village and celebrate the season with historic holiday stories, crafts and games, and pictures with Santa. Admission is $8 for ages 18+, $7 for ages 4-17 and 60+, and $6 for groups of 10 or more. Ages 3 and under are free. No reservations are required. 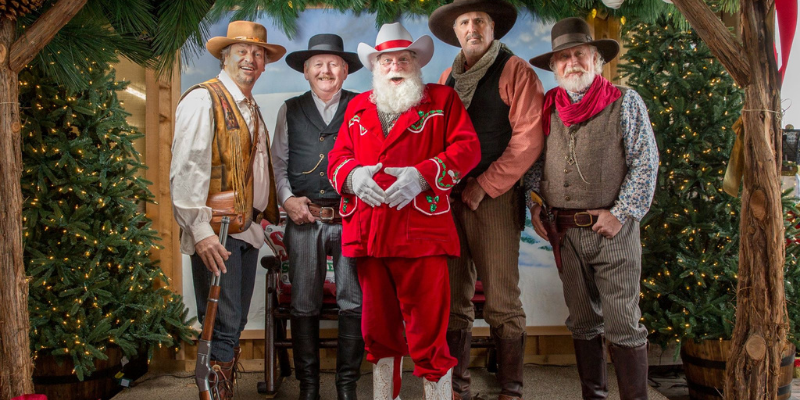 20th Annual Christmas in the Stockyards

Kick-off the holidays at Christmas in the Stockyards from 10 a.m. to 8 p.m. on Saturday, December 4. Festivities include Sounds of the Season, reindeer games, photos with Cowboy Santa in Mule Alley, Story Time with Mrs. Claus and a Christmas parade following the 4 p.m. cattle drive.

Santa Claus is coming to (Cow)town for Crockett Row’s Country Christmas Celebration on Sunday, Dec. 5 from 11 a.m. to 2 p.m. The fun will include brunch specials at restaurants and retailers, ornament decorating, photos with Santa and his ReinSteer for just $10, live music and more.

Christ Chapel Bible Church presents its annual Christmas concert featuring their very own orchestra and choir for an hour of spectacular and heartwarming music. The event is free to all, but a selecting a reservation reminder is strongly recommended.

Find yourself spellbound as Texas Ballet Theater brings you into Tchaikovsky’s classic holiday ballet. “The Nutcracker” runs December 10-26 in Fort Worth at Bass Performance Hall. Tickets start at $25.

Celebrate the holiday season featuring Fort Worth’s own Phunk Dr’s along with some long time Jubilee Theatre performers for a concert of music, comedy, and more! Purchase tickets online or at the Jubilee Theatre Box Office. Tickets start at $28.

The Clearfork Holiday Market runs Saturday from 9 a.m. to 1 p.m. Check out Clearfork’s Round-Up ahead of time for a weekly list of local vendors. On December 18, Clearfork celebrates in a big way with Santa and even more goodies during Clearfork Christmas scheduled from 10 a.m to 2 p.m.

Holiday in the Garden

The Botanical Research Institute of Texas (BRIT®) | Fort Worth Botanic Garden invite you to celebrate the holiday season at “Holiday in the Garden” on December 11 from 10 a.m. to 4 p.m. The festive event will feature artisan vendors, food trucks, holiday carols from the Fort Worth Opera in the Garden, and a visit from Santa himself. Admission is free with normal garden admission.

Fairmount Festivus, a holiday light tour of the Fairmount National Historic District, returns Saturday, December 11, from 6-9 p.m. launching from One Safe Place. Participating house locations will be provided via a map on the day of the event at the launch site. A $10 donation or toy donation to One Safe Place is suggested in exchange for the map.

Sounds of the Season at Arborlawn United Methodist Church

The Fort Worth Symphony Orchestra celebrates the holiday season with a family-friendly concert at Arborlawn United Methodist Church on Friday, December 17, at 7 p.m. Enjoy holiday favorites including music from The Nutcracker, Have Yourself a Merry Little Christmas, ‘Twas the Night Before Christmas, Sleigh Ride and more. Tickets are $25.

The Lockheed Martin Armed Forces Bowl for the Brave, featuring a match-up between teams from the Mountain West and Big 10 conferences, kicks off December 22 at TCU’s Amon G. Carter Stadium.

Gretta Hendricks is a multidisciplinary creative who has been a chocolatier, baker, birth-doula, performance artist, and freelance writer, although her favorite job to-date has been becoming a first-time mama to her beautiful rainbow baby, Ofelia, born in January of 2020. Gretta has enjoyed writing for as long as she can remember and is passionately interested in the ways she can both learn and share from the art of storytelling. Alongside her husband and daughter, she loves living in and exploring Fort Worth as well as pouring into her church and local community.