A Legacy of Learning

The challenges facing the Fort Worth Independent School District (ISD) are daunting. Teachers are tasked with providing for the education of more than 84,000 young minds and much more. After decades of work in social services, nonprofit governance, and community organizing, school district trustee Daphne Brookins understands the work that Fort Worth’s teachers put into helping their students goes far beyond what many would expect. 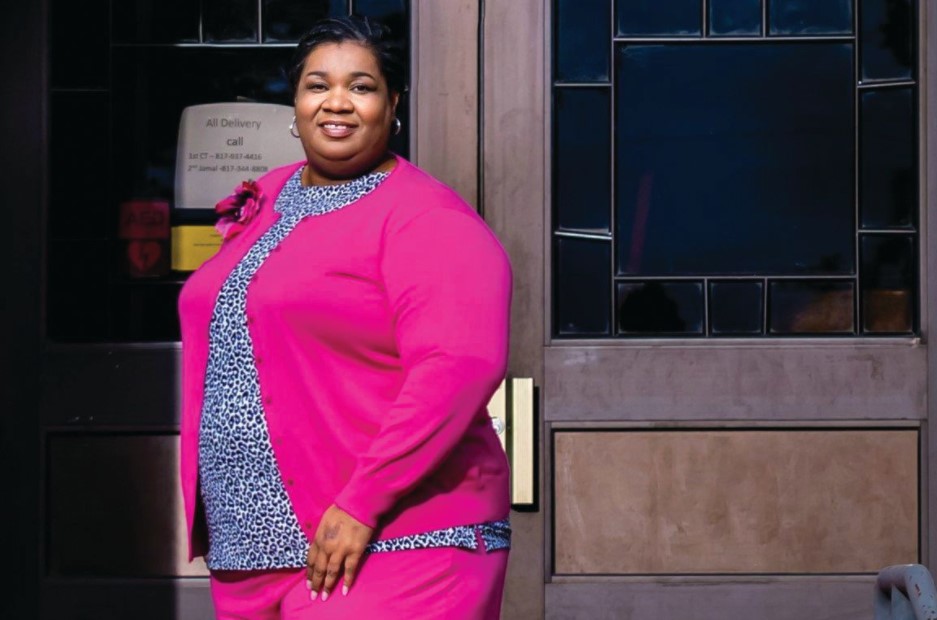 “Our teachers and staff are essentially caregivers to each student that walks through our doors,” Brookins said. “They provide them with social and emotional support. They are normally the ones who can tell when [students] aren’t feeling well and assist to get them to nurse or make sure they have breakfast and lunch. They are our [front] line advocates for their students as well as the whole child.”

The trustee’s moral compass was shaped early in childhood by her parents — particularly her father, Slidell Harvey, Sr. The former professional baseball player would tell Brookins and her five siblings, “Legs are not forever. Even if you are an athlete, you need to be a student first.” 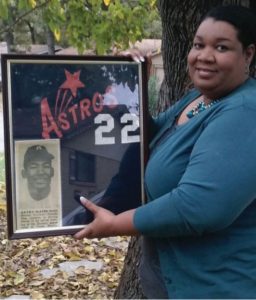 Brookins’ father had a successful career playing for the Houston Astros, but his early jump into the major leagues before finishing high school left him ill-equipped for the transition to a post-baseball career. Harvey instilled values like discipline and hard work into his children, Brookins said, and he wasn’t afraid to dangle carrots when he knew his children could rise to the occasion.

Brookins, who currently serves on the board of Fort Worth ISD, had early setbacks in her efforts to earn a college degree. Like her father, she pursued athletics after college. After winning the NCAA D11 Indoor National Championship in shot put, she failed to qualify for the Olympics that year. Brookins’ mother was stricken with a serious illness around that time.

“I was just done,” Brookins recalled of her decision to not complete her last season of college track.

By her early 20s, Brookins had developed a passion for social service work, a service that she advocates for to this day. During the nearly decade-long stretch between her first run at college and her eventual graduation from Texas Wesleyan University in 2001, Brookins worked for Fort Worth Housing Solutions as coordinator for the I Have a Dream Foundation, a charitable trust that provides social, emotional, and academic support to young people from low-income communities.

Whether as a foundation coordinator, nonprofit board member, or school board trustee, Brookins said she has always had a “passion to help people succeed.”

When the foundation merged with another organization seven years into her job, Brookins was laid off. However, she used it as an opportunity to finish college. While earning a three-part degree in two years that encompassed business management, psychology, and fine arts, Brookins described catching the “political science bug” while taking a political science class under professor Ibrahim Salih. After years of being the point of contact between public policy and underserved communities, Brookins wanted to learn how to affect change from the top.

“I was intrigued when I took that class,” she recalled. “I asked him, ‘How do I get involved in this?’ I had been in social services and was ready to take it to the next level. He said to start volunteering in the community and to start getting involved in the city council. I applied for a committee in Forest Hill and was appointed.”

During her second year in that position, a city councilmember announced his pending retirement. Stating that he liked Brookins’ work ethic, the council member endorsed Brookins, and in 2002, she subsequently became the youngest city councilmember the city of Forest Hill had known. She then served as Mayor Pro Tem for Forest Hill from 2005 to 2007.

Brookins was a young wife and mother at the time and worked to keep family-related issues as part of the discourse among the more senior city councilmembers. She also took her children’s education seriously. She made sure to keep her boy involved during summer breaks to keep their minds sharp. Both of her boys attended college (one is a recent graduate), so her efforts paid off.

“They were constantly learning, even during the summertime,” she recalled. “Having a father who didn’t graduate from high school made me want to make sure that my children took advantage of those opportunities.”

Just as her father had reminded Brookins that legs don’t last forever, the young mother told her children that she wanted them to be “forever students,” whether that meant reading, formal learning, or simply seeking new experiences.

The years after her work in Forest Hill were full of accolades and leadership roles, including the Fort Worth Business Press’ Greatest Woman in Texas Award (2009), a governor appointment to the One Star National Service Commission, and Mayor Mike Moncrief’s Believing in Youth Award (2009), among many others.

Last year, Brookins won a three-way race to represent Fort Worth School District 4. In doing so, she replaced Dr. T.A. Sims, the district’s longest-serving board member. Leading a district that serves more than 84,000 students has given the long-time public servant her most powerful platform for affecting change yet. Instability, poverty, access to healthcare — countless social issues are closely tied to public education, she said.

“I believe that all that time I was working in social services — working with youth and college kids — I was being prepared for a position like this,” she said.

It is the duty of this generation’s parents and taxpayers to support public schools because these students are future caretakers, doctors, and lawyers, she added. The ongoing pandemic is pushing the science community’s brightest minds to find a cure for COVID-19. Brookins said future generations will face similar challenges, and many of those problem-solvers may be products of this country’s public-school system.

“The majority of children who attend public schools need support,” she said. “They need resources. Growing up, everyone on our street knew my family. We don’t have that anymore. Our kids need that extra support. They need that village back.” 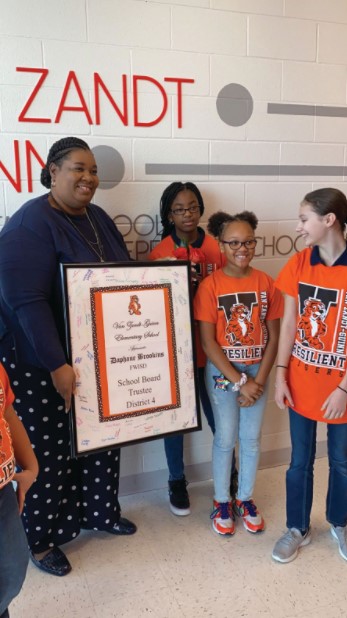 Though new at her role as a school board trustee, Brookins said her efforts are focused on ensuring that daycare providers have the resources and training to ensure that children in pre-kindergarten and Head Start (an early education program for financially struggling families) are on track to meet certain reading metrics by third grade. Parents are another part of the educational equation that the trustee is focused on. The abrupt halting of in-person classes has reinforced the importance of parental involvement in learning.

“We need to make sure that these parents are equipped to help,” Brookins said.

Beyond that, there is the longstanding goal of any educator: to prepare students to graduate so they can go on to higher education or to get a certification.

Many of those goals were put on hold when a deadly pandemic spread through North Texas and caused the closing of school campuses last March.

“We were getting a lot of calls,” the trustee recalled. “Parents were wondering how we were going to do this. We were asking ourselves if we had enough technology to make sure all the schools were covered and not just the ones who had the funds. We first had to pivot moving around 84,000 students to an online learning platform within a week. Then, we had to make sure teachers had the resource needed to teach from home. Coronavirus has presented a challenge on how to meet our student needs in all these areas. It is difficult to engage students when we don’t see them in person.”

The dangers posed by the pandemic keep her up at night.

“There are so many lives involved — not just our students but our staff,” she said.

Brookins was relieved when Tarrant County public health officials made the decision to delay in-person classes for six weeks. COVID-19 cases remain at record levels in Texas, and many teachers and staff are concerned for their safety and the safety of children who would be asked to congregate in classrooms where social distancing is possible in theory but likely impossible in practice.

While there are economic and educational considerations to be had when reopening public schools, for Brookins, safety and lives come first.

“This virus has so many unknowns,” she said. “I would rather delay than put their lives on the line. The extension gives us more time to make sure every safety precaution is taken before we start back to in-person instruction. We can always bounce back as far as the economy worries go. Once you lose a life, that life is gone.”

The school district does much more than teach young minds. Campuses across Fort Worth are often the only source of lunch for children, the vast majority of whom qualify for reduced or free meals. The district partnered with Tarrant Area Food Bank and other groups to provide meals to students throughout the pandemic and the following summer.

Fellow school board trustee Ashley Paz said Brookins has taken on the recent challenges by “personally buying meals for hungry families and helping to keep people engaged during meal distributions.”

“Daphne has a very thoughtful style of leadership that makes for a great public servant,” Paz continued. “She listens to all perspectives and stays engaged through the deliberative process in a very soft-spoken manner. That’s why when Daphne speaks up, I know it’s time to listen.”

Brookins said a recent board meeting discussed the need to continue feeding students until campuses reopen. As of the publishing of this article, that opening date is still a moving target. Tarrant County public health officials recently postponed in-person classes until September 8, and there’s no telling if that even date will allow for a totally safe opening.

When asked about the strengths of Fort Worth’s schools, Brookins immediately began talking about the teachers.

“The teachers are really compassionate about their jobs,” she said. “I don’t think a lot of people see that because of everything that is going on. They miss being in the classroom with their students. They have always been tasked beyond delivering instruction.” Teachers and staff become second families to their students, celebrating successes and comforting after failures. The district’s teachers inspire their students to greater achievements in the classroom, in the arts, on the athletic fields, and in life. 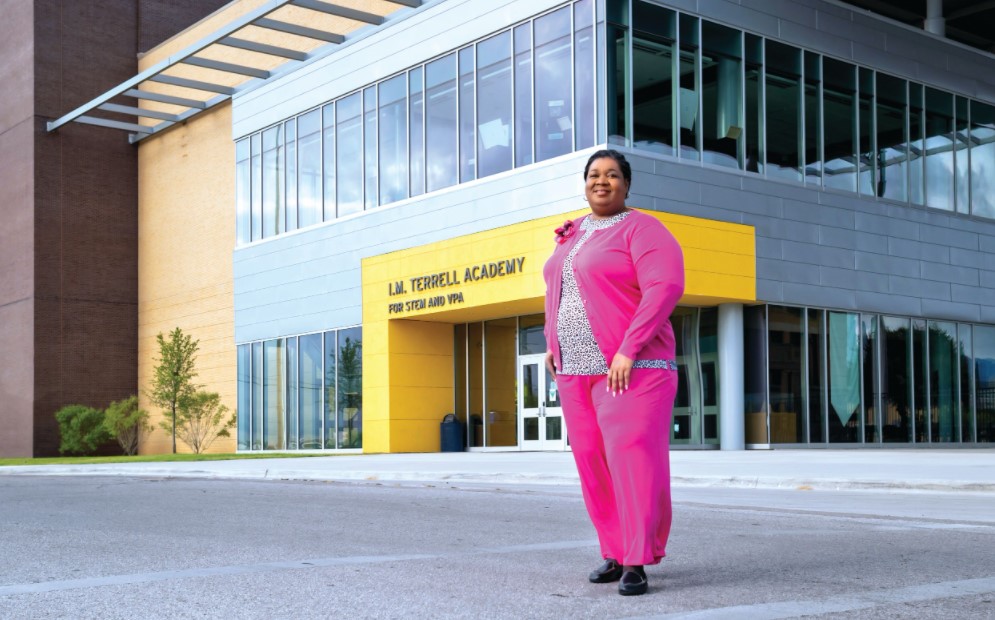 Like most large urban school district, Fort Worth ISD performs its work on a tight budget. Brookins said the district is making strides in important areas like parent engagement and college readiness. The community leader credits the advice of past mentors and teachers like her father and Dr. Salih for guiding the way to her current leadership position. She works daily to provide those same opportunities to others.

“That is something that both of my parents instilled in me,” she said. “To always be that voice for the voiceless and to always help others. No matter what our financial situation was, there was always someone who was worse off, and we needed to help them.”