“The structure and the function of the brain change from running [and] leads to increases in cognitive function. Running and other aerobic activities can either preserve brain structure or reverse cognitive declines already seen.” – Dr. Robyn Trocchio 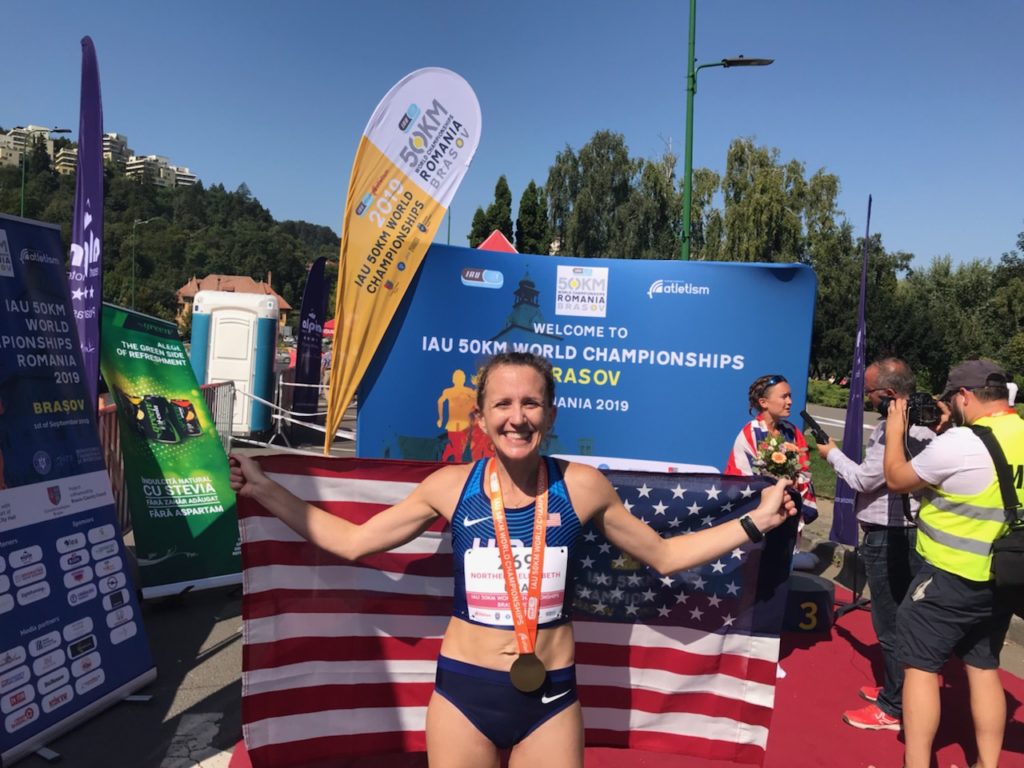 Liz Northern wears tortoiseshell glasses, a small nose ring, and has a perfect splattering of freckles on her heart-shaped face. She’s a self-proclaimed introvert, and thoughtful with her words and actions.

In 2019, she set the Guinness World record for running the fastest 10K race while pushing a double stroller in Joe’s Run, an annual race which supports Fort Worth’s Samaritan House. She’s also the only woman to win every single Cowtown Marathon event that exists. And she ran in the World 50K Championships last year in Brasov, Romania, placing sixth in the world.

Oh, she also competed in this year’s 26.2-mile Olympic Marathon Trails in Atlanta, ranking 73rd with a time of two hours, 42 minutes, and 57 seconds.

For Northern, 32, running is as much a part of her identity as being a mother of two. It has been her rock and dedicated time for self-care when parenting young children gets hard because, let’s face it, it always does. As she tells new moms, “You need to set aside at least a half an hour every day for you — a time when you’re not being touched by a single person. Maybe it’s running or [maybe] in the bathtub.”

“I think it’s safe to say that mothers sometimes mourn their old lives,” said Northern. “I felt selfish for wanting more freedom. Getting up in the morning and meeting my friends was like mandatory alone time for me.” 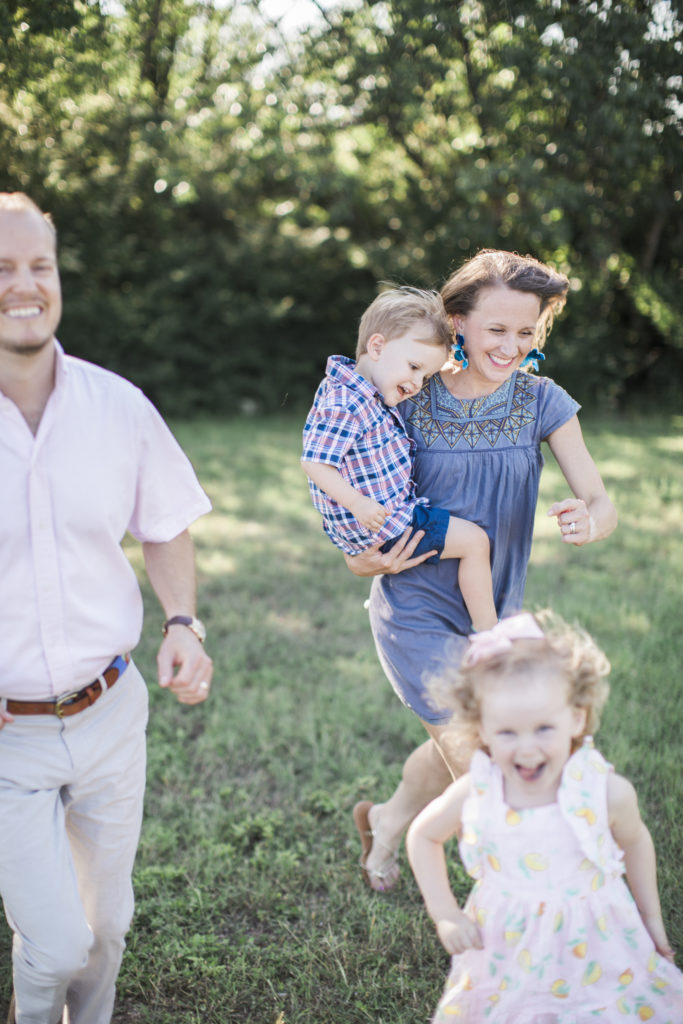 Running has also become part of her family’s identity. She’s raced and won pushing a stroller across the finish line. Her children and her husband, Will Northern, have been with her on the sidelines to cheer her on and keep her motivated though every major race. And she clings to her “mom tribe” for support when things get hard.

Northern wears pictures of her children on a dog tag around her neck during races. They remind of her who’s waiting at the finish line and what’s going to come after it. After all, racing, while important to her, isn’t her whole life.

When the coronavirus pandemic hit and gyms closed, many people began running. After all, exercise is an outlet for anxiety and stress, and the only open spaces open for exercising were parks and neighborhood sidewalks and streets.

“Running helps keep your body moving and gives a person the feeling of accomplishment but also helps to keep people fit and active,” said Heidi Swartz, executive director of The Cowtown Marathon. “With all of our days running together, working from home and not having our normal routines, running is something that you can make a routine. People need to remember that it doesn’t matter how fast you go. We’re all not fast like Northern, but we can all get out there and run or walk and accomplish a goal.”

Swartz says the key to success is to keep moving.

Moving is an understatement for Northern. Even when she’s not training, she’s still running 60 miles a week. Her next goal is completing the 2020 World 50K Championships, which is scheduled to take place this November in Jordan.

But even for the fastest woman in Fort Worth, as with the rest of the world, life has slowed down.

She doesn’t have any big plans for racing besides the possible race in November. Trying to have another child is also a possibility on the horizon.

“This has been a good mental break,” said Northern. “I was getting to the point with work that I didn’t see my kids that much. Now I see them too much. Ha! So, I’m trying to find balance there.” 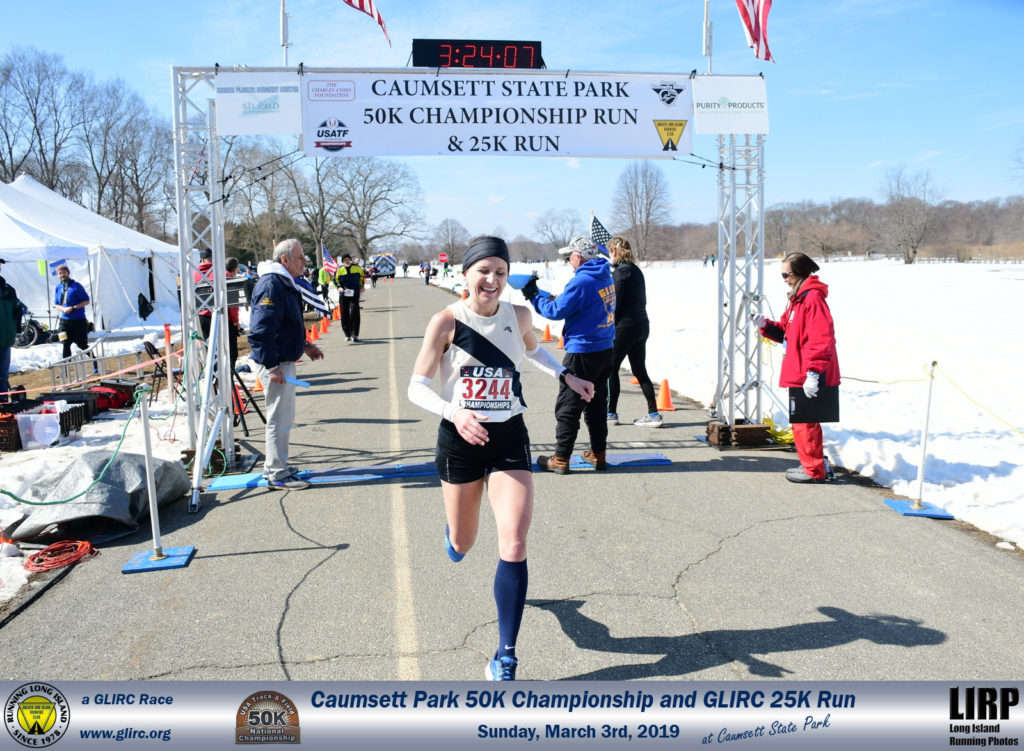 It was boys with no shirts on. That’s what first drew Northern to the cross-country team at Nolan Catholic High School, just like any giddy teenage girl who was looking for a sport. Despite that frivolous beginning, Northern’s experience on the high school cross-country team gave her a strong foundation in the sport and let her walk on to the team at Trinity University in San Antonio. At first, she was the worst runner on Trinity’s team. But within a year, she’d made it to the national cross-country meet.

“My coach was a long-term thinker. He didn’t measure each day. We thought six months out.”

That approach to planning and training made it less competitive among members of the team, says Northern. Even today, she remains close friends with the women she met running beside in college.

“There’s something about running shoulder to shoulder with somebody,” said Northern. “Vulnerabilities are taken away. You’re not working with eye contact. It’s a safe environment; everyone is going through the same hills and winds. It’s a level playing ground.”

After she graduated, running was always there. Throughout her life, it has been a constant for Northern when life is full of uncertainties and change.

According to a story from the American Psychological Association, exercise in general is a mood boost. Exercise can also help diminish long-term depression, and continual exercise has even been compared to the efficacy of antidepressants for people with major depressive disorders.

Personally, running has been my saving grace during COVID-19, when stress and anxiety is a constant companion. The practice has imposed strict structure to days when all dates on the calendar blur together.

Anxiety disorders affect 40 million adults, according to the Anxiety and Depression Association of America. Today, that number is probably much higher. What scientists know about physical exercise is that it works magic on the brain.

“I like to think of exercise as the ‘magic pill’ we all want,” said Dr. Robyn Trocchio, assistant professor of Kinesiology at Texas Christian University. “Most people know about the physical benefits of exercise such as reducing your risk for heart disease, Type 2 diabetes, high blood pressure, and strengthening your bones and muscle. Exercise, however, can also provide numerous psychological benefits including reducing depression, anxiety, stress, and it enhances positive moods, learning, and memory.”

Dr. Trocchio says the hectic pace of Western society is already stressful enough, but with all the uncertainties surrounding COVID-19, our stress levels skyrockets.

And a little bit of exercise can go a long way.

“Research has shown that 30 minutes of moderate-intensity aerobic exercise (i.e. brisk walking, jogging, swimming) three times weekly can boost mood, reduce psychological distress, and decrease symptoms of depression and anxiety compared to those who are sedentary,” said Dr. Trocchio. “Some studies have even reported that just a 10-minute walk can improve your mood. Choosing activities that are predictable can allow your thoughts wander. Also, rhythmical and repetitive movements may encourage introspection and creative thinking, which enhance personal growth and positive moods. Examples of these activities are jogging and swimming. But, the most important aspect of exercise is finding an activity you enjoy. Finding and engaging in activities that provide enjoyment is a much more effective exercise adherence strategy than inducing feelings of guilt or summoning ‘will power.’” 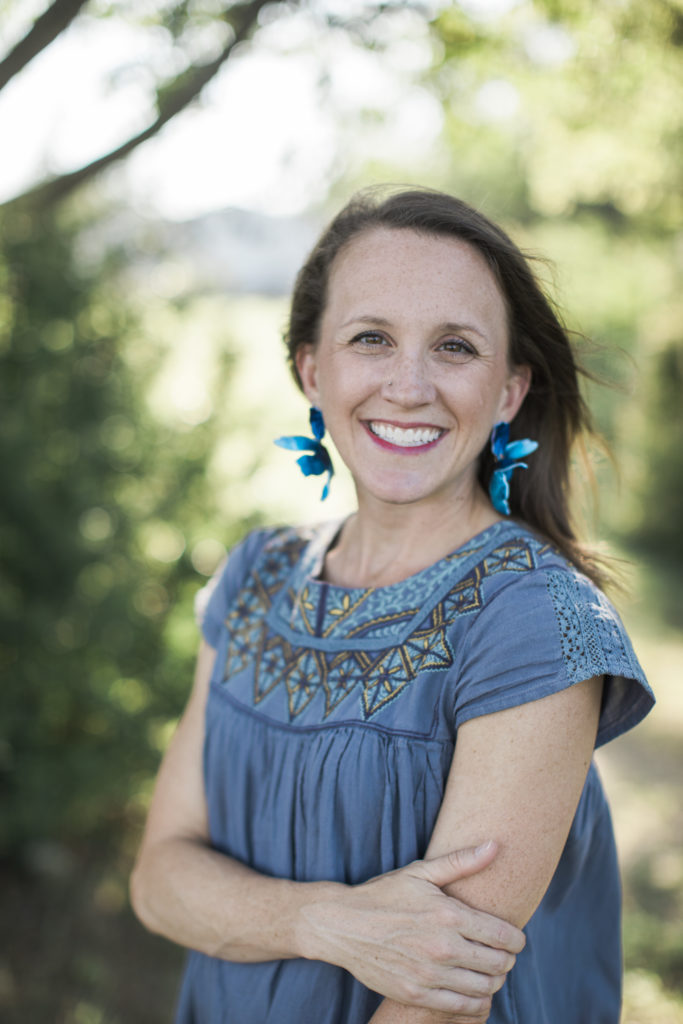 “It’s nice to get the fresh air and get out of the house and to get the adrenaline going and that endorphin rush,” said Northern. She says that when running on a trail, there’s a sense of community when you pass by other runners. “Even though you’re social distancing, you’re aren’t alone.”

However, she warns against starting a running regimen too quickly. “You have to listen to your body. Take care of yourself. And look out for other people.”

For Northern, running has never been her coping mechanism. “When I’m sad or depressed, I don’t like to run. Because I’m in my head. I’ll have to be with somebody else so they can talk the whole time. When I look back at my life, the times I’ve stopped running is when I’ve been in a bad spot.

Northern says that people need to find a coping mechanism that works, especially now. “Running might be it,” she said. “You ever know until you try it.” 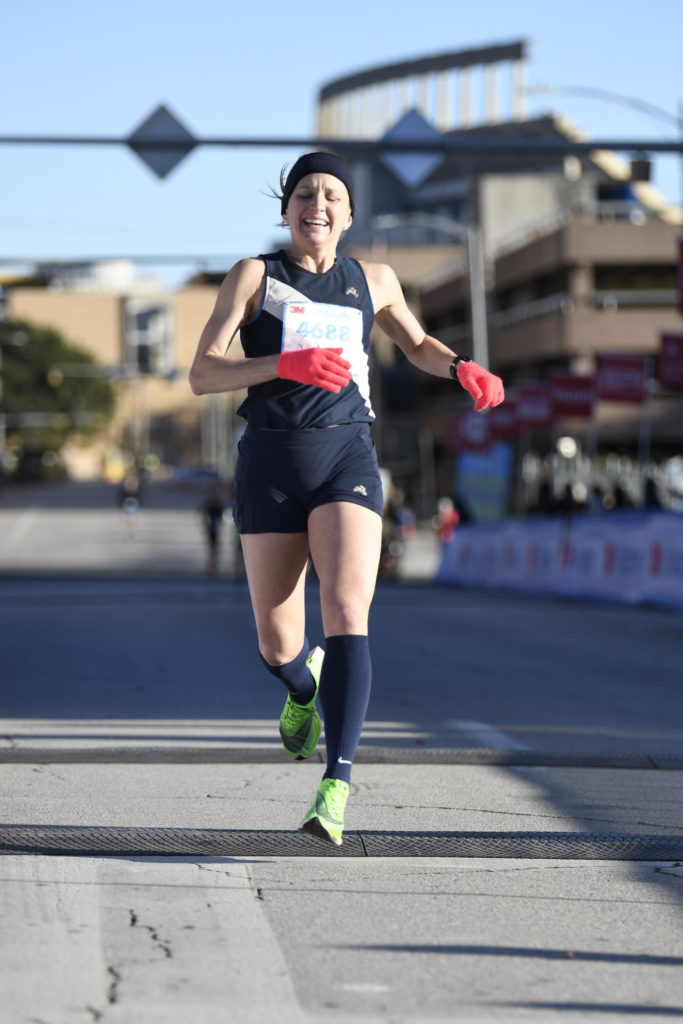 “Everyone can be a runner and or a walker,” said Heidi Swartz. “All you need is a good pair of shoes and a path to take you down; you can do it. We currently have a virtual training program starting June 1st and some virtual runs taking place. If people need a goal to reach or some motivation to help get you out there, just contact us and we can help you get moving.”

When and if you want to give running a shot, it pays to do it right by getting fitted for running shoes. I’ve been running about 10 miles a week for the past five years. But when COVID-19 hit, I started running a lot more. But I’d still never got fitted for shoes. Instead, I just continued to hurt my feet. And toes. And ankles. That is, until I talked to Northern and Heidi. They both recommended professional fitting at shop devoted to running, so I went — with social distancing in full effect.

Even during COVID-19, on a Sunday in May, there was a waitlist to get “fitted.” I put my name on the list and walked around the shops at WestBend, a place I used to frequent before the quarantine.

Inside the small store, all three employees wore masks. The store is so small in fact that there’s a five-person limited capacity right now. Happily, hand sanitizer sat freely on a stool next to the door.

Caitlin was my gal for the fitting. First, I stepped on a machine that did “pressure mapping” of my feet. It checks to see how and where weight is distributed and measures your arch. To my surprise, my arch was high. All this data is necessary because it informs the type of shoe to buy.

Then we walked behind a funky see-through wall of white twisted hangers to a treadmill. Caitlin told me to get on and start running (when I was ready) for about 10 seconds. She videoed the process on an iPad and showed it to me afterward.

It was cool seeing my feet run in slow motion. I’d never even thought about what my feet looked like hitting the pavement. I’m always totally in my daydreams, jumping to avoid runaway dogs and sunbathing cats as I weave through my Near Southside neighborhood.

With the results in place, Caitlin brought out five pairs of shoes for me to try on. Of course, I wanted performance and pretty. One surprise was that I wear a size 10.5 in running shoes instead of the size 10 I’d been incorrectly wearing since forever. “They’ll last longer,” Caitlin said.

Like everything in life, running is a journey. Sometimes the finish line is just over the next hill, and sometimes it takes years to get there. 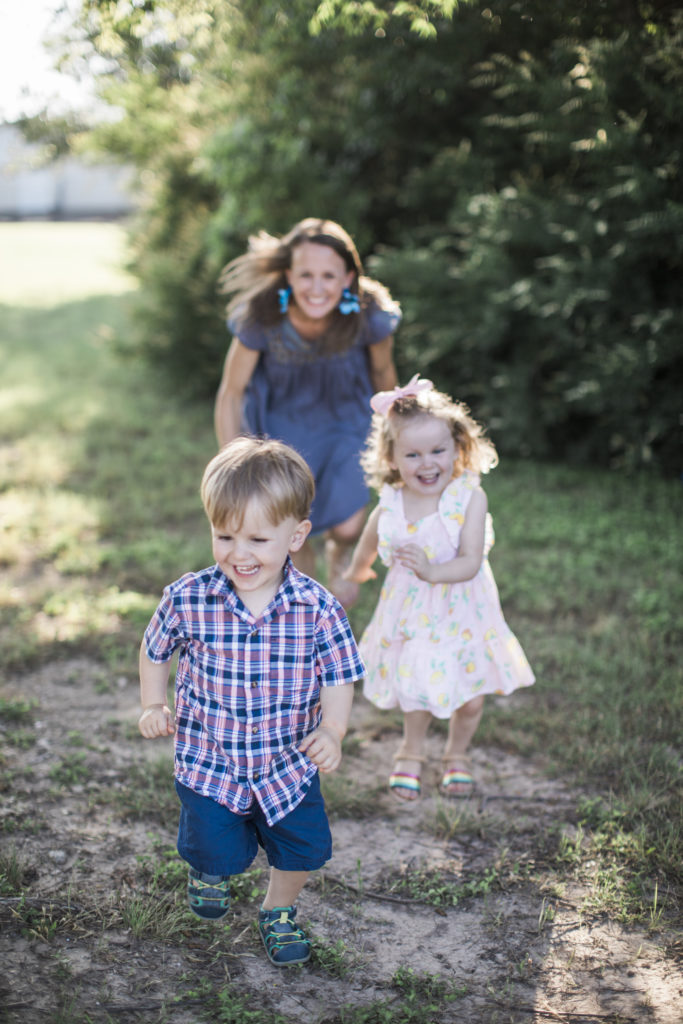 Liz Northern knows that while real power comes from within, it is also amplified by somebody believing that you can do. Just likes she believe in her children and her family, they believe in her and her future as a competitive racer. She wants real and unsugar-coated love. She needs to hear, “You’re going to do great, but it’s going to hurt like hell.”

“I wasn’t fast as a high schooler,” said Northern. “Just give yourself time. Enjoy the process. It’s a collective growth and compounding effect. You’ll get better with consistency, but it won’t happen overnight.”

For more than a decade, Sarah Angle has worked as a Texas-based writer. She began her career as a daily newspaper reporter and photographer, and now splits her time between journalism and marketing communications. As a journalist, her work has been published in the Washington Post, Boys’ Life magazine, Texas Observer, Fort Worth Weekly, The Dallas Morning News, and 360 West magazine. Currently, she teaches in the School of Strategic Communication at TCU. Sarah lives in Fort Worth with her darling daughter and a house full of books and mid-century modern décor.