Much of Donald Martiny’s artwork walks an intriguing line between painting and sculpture; he creates pieces that interact profoundly with spaces and the dynamic language of light that fills them. 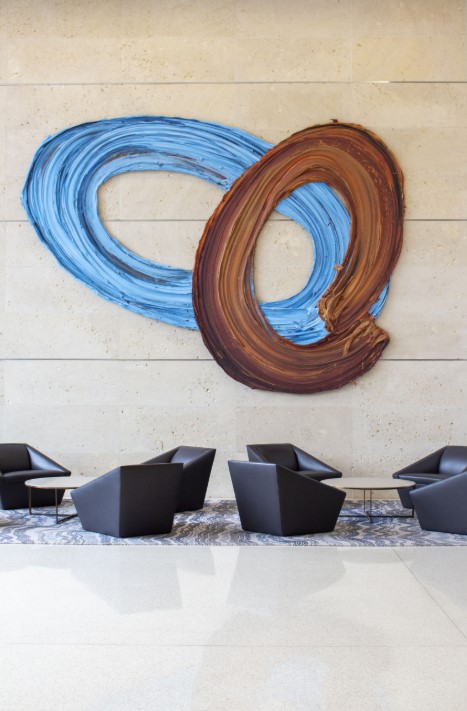 From his studio in Chapel Hill, North Carolina, Martiny has his art shown all around the world, with two pieces found in the One World Trade Center building. Represented by the folks at Galleri Urbane, currently based in both Dallas and Marfa, his reputation continues to chart a rising course, and this momentum has brought him to the lobby of the Frost Building in downtown Fort Worth.

Martiny, who is originally from Schenectady, New York, is a polymath driven by curiosity. It has led him to study extinct languages, work as a script doctor, act as a creative director in advertising, and learn to make his own paints, among countless other surprising stories that continually pop up while chatting with him.

While a student at the Pennsylvania Academy of Fine Arts, Martiny began by balancing the twin towers of craft and theory. “I had to learn how to paint what I saw in the museum before I found my way.” From landscapes, he followed his art outside the lines, and that art became a portal into another state of consciousness. By shifting the value of the familiar rectangular frame’s boundary, he allows viewers to experience a sense of timeless wonder. “I wanted to invite a very intimate experience. When people see a painting that strikes them, they want to participate with how it functions.”

Commissioned by Greg and Laura Bird, the Frost Building’s owners, Martiny has created what he says may very well be the world’s longest brushstroke – thirty-four feet of earthy browns and spectacular blues. The painting consists of 36 gallons of handmade paint and runs seventeen feet by twelve feet. The magnitude of the piece required him to work on-site in a makeshift studio in one corner of the lobby. Laura Bird describes it by saying, “This is as close to public art as we will get.”

The piece’s title, “Hugin + Munin,” is a reference to the god Odin’s ravens from Norse mythology that also serves as a nod to Laura and Greg Bird. “They have been decisive and enthusiastic throughout the process, which is what you want [from someone commissioning a piece].”

Martiny’s initial sketches illustrate an underlying sense of the energy or movement that the work would eventually realize. But the sketching–out process continued from first blush throughout the construction of the work, as he molds the thick paint and fine-tunes the pigments into the ideal chromatic partnership. “I paint very freely, and that free form determines the form of the painting, as opposed to a Frank Stella [piece, which occurs] with a system in mind.” 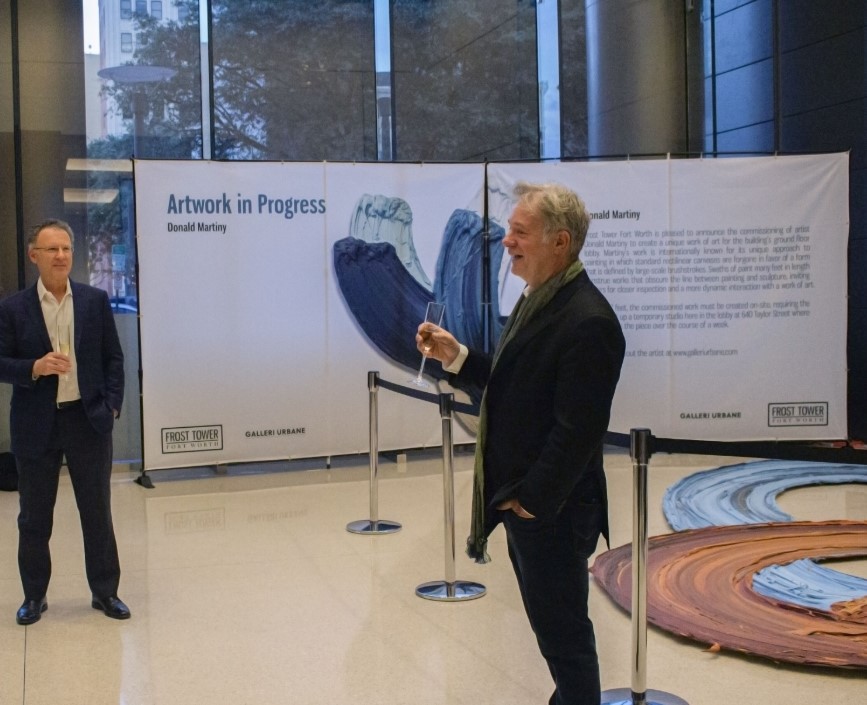 The project took three weeks to plan, and four days to execute. Martiny explains, “I like to be in the paint; it is a very immersive process. More than making a mark, I am moving feelings around. I truly believe that color and form can change our moods, and if that’s the case, they can change our behavior, and ultimately, our world.”

Grinding and composing the pigments himself, Martiny uses ultrasound to determine the appropriate consistency and density of color of the pigments he uses. The paint consists of long-chain polymers, approximately 65 compared to the 16 one might find in store-bought paints, which means they adhere potently to one another and allow for a sturdy structure.

It took a week for the artist to build the armature upon which the piece hangs. The mounting gives it support while allowing it to hang outward, as Martiny says, “granting a more invasive engagement with the viewer.” Also, the perspective will dance between the light of the lobby’s massive windows throughout a day or from one season to the next. “As it hangs, it will grow stronger.”

The value of the art hanging in the Frost Building’s lobby offers a dialogue with the history of art itself, melding the artistic intimacy of the brushstroke with the spatial ingenuity of sculpture. Movement is life; the dynamics of a work of art reflect the transitions that we experience as we navigate the coordinates of our varied maps.