Playing with the Elephants

In 2016, the Fort Worth Zoo announced A Wilder Vision, the $100-million capital campaign to create new habitat spaces, renovate existing habitats, and give visitors new ways to observe, interact with, and learn about animals, as well as making the Zoo even more accessible and enjoyable for everyone.

Phase I, the African Savannah, opened in 2018, allowing guests to learn about and watch such diverse species as reticulated giraffes, greater and lesser flamingoes, Southern Black rhinos, lesser kudu, and springbok. The Zoo’s hippos swim through a lazy river. The African Savannah exhibit has been a hit with the Zoo’s visitors and raised the bar for zoo exhibits across the nation.

Now it’s the elephants’ turn. Phase II of A Wilder Vision, Elephant Springs, opened in April of 2021, and it changes the paradigm for elephant management in zoos. The Asian elephant herd at the Fort Worth Zoo has long been a favorite of most Zoo visitors. All of Fort Worth celebrated with the Zoo when the youngest members of the elephant herd, Bowie and Belle, were born a month apart in 2013. Generations of Fort Worthians have taken photos with the statue of Bluebonnet, who is now 22 years old and is Bowie’s mother. (Bluebonnet’s statue is back in the exhibit, ready for more pictures.) We Fort Worthians love our elephants, and now they have an exhibit worthy of royalty. 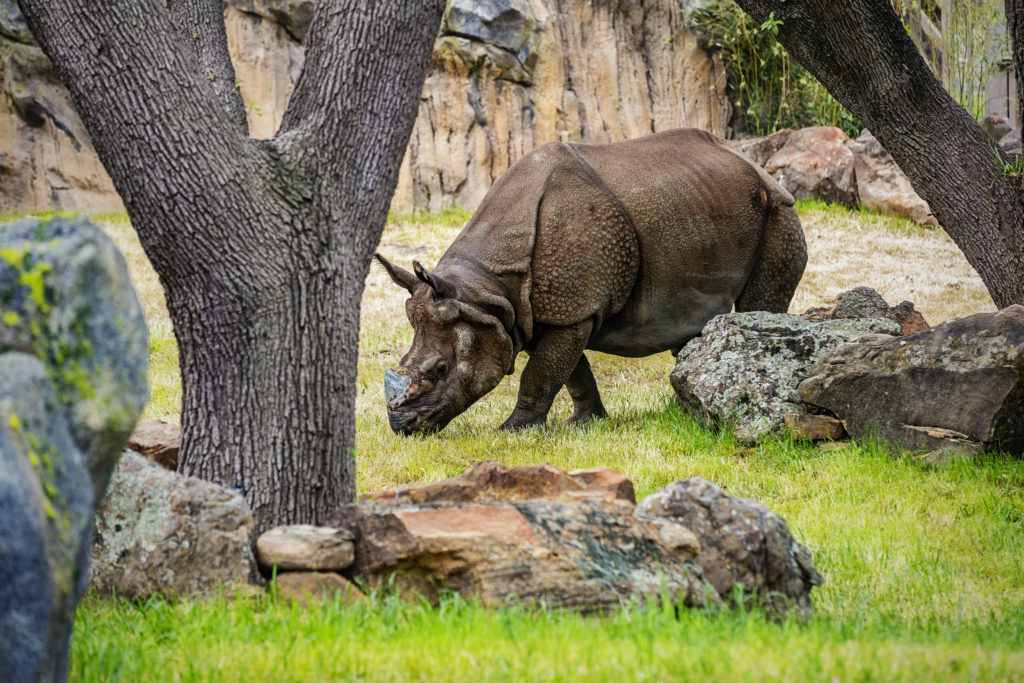 Parvesh, the greater one-horn rhino
Photo courtesy of the Fort Worth Zoo

Recently, I sat down with elephant keeper Christine Del Turco and Avery Elander, the Zoo’s Assistant Director of Public Relations to talk about the development of Elephant Springs and how the elephant herd and Parvesh the greater one horned rhino are reacting to their new habitat.

Del Turco has been with the Zoo’s elephant herd for almost eight years and has worked with Asian elephants for 14. She came to the Fort Worth Zoo from an elephant sanctuary in Arkansas, and her love for her charges is obvious. Her love for the new habitat is equally obvious.

“We’ve tripled the yard space for the elephants,” Del Turco said. “We can customize the exhibit for what the keepers and the elephants need.” The barn is state of the art and enormous. The off-exhibit yards are just as lush as the public yards with grass and shade trees and water holes. The Zoo wisely involved the elephant keepers in the planning of the new habitat, and the behind-the-scenes spaces are just as gorgeous as the public spaces. 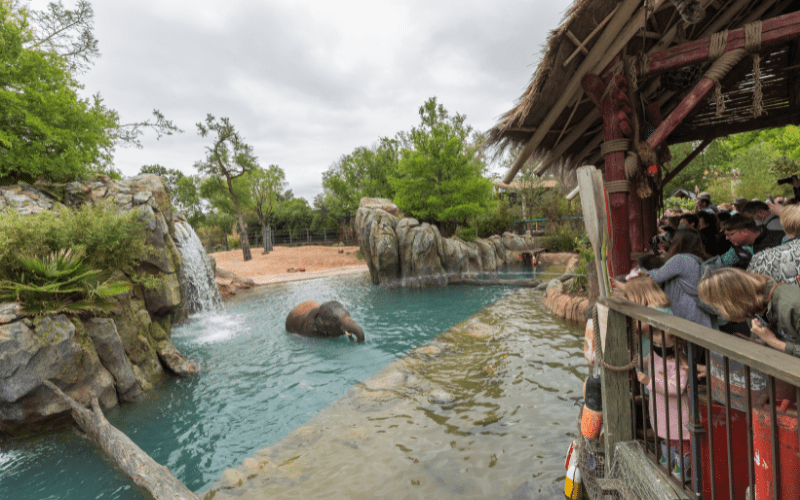 One of the first thing that visitors will notice about the new habitat is the water. Between the river, the water holes, and the waterfall, as well as the interactive water streams, the elephant herd enjoys over 400,000 gallons of water, which are kept sparkling clean by a water filtration system that ties into the Zoo’s irrigation system. Little Bowie is especially enamored of the water streams. “He stands there trying to catch the streams of water in his mouth.” Water is especially important to Asian elephants, whose natural habitats include forests and wetlands.

“Belle was the first one to go in for a good swim when we introduced [the elephants] to their new space,” Del Turco recalled. “Her mom, Rasha, was more cautious. But then we got some rain, and Rasha came over to investigate the river. Belle came up behind Mom and pushed her in! Now Rasha loves the river… she’s our old girl, so it’s really good for her joints.”

The beauty of the new yard system is that the elephants can be a part of the herd or have some alone time. (And don’t we all need that?) When I visited, Christine let me see into the behind-the-scenes yards, and one of the bulls, Romeo, was in a yard by himself, enjoying some alone time under a tree. Angel, another of the cows, is the herd’s napper. “Her first time in the new yards, she looked around, found her nap spot, and that was that,” recalled Del Turco. She showed me a photo on her phone of Angel peacefully sleeping with construction workers behind her, as proud as any mother showing pictures of her child.

Elephant Springs is designed to look like a floating fishing village. There are multiple spots for visitors to stop in the shade of thatched huts (complete with overhead fans and misters), the aforementioned water streams to play with the elephants, and a shaded demonstration area for keeper chats. I just happened to be walking through the exhibit with my guides when it was time for a keeper chat. Two keepers took Colonel through a demonstration of his daily training, which is designed to help the keepers make sure that the elephants are healthy and happy. The crowd on a weekday afternoon overflowed the seating area. 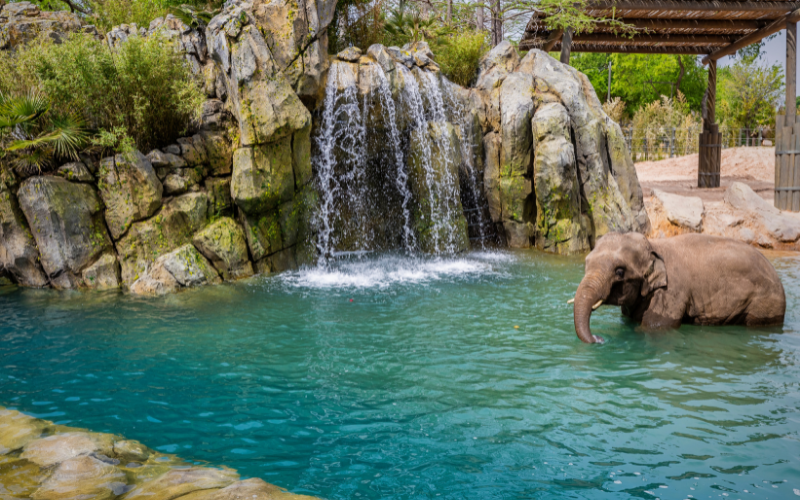 When I visited, Parvesh, the teenaged greater one horned rhino, was sunbathing in a wallow. “His yard had nice grass,” Del Turco said. “But after all the rain [I visited during the May rains], he tore up the grass to make himself a mud bath.” Del Turco said the Zoo is currently looking for a mate for Parvesh, although he looked perfectly content, napping in the sunshine and mud.

Along with education, animal conservation is one of the Fort Worth Zoo’s main missions. Both Asian elephants and greater one horned rhinos are endangered, and through careful breeding, the Zoo helps ensure that future generations will get to know and love these incredible creatures. “That’s ultimately why we’re here,” Elander said. “To establish these connections that kids and people would not otherwise be able to have… to inspire them to learn more about the animals and conservation and how they can help… and further strengthen the bond between them and the animals.”