It was early January of 2015 when she noticed a FedEx envelope on her front doorstep. The unexpected termination letter turned her world upside down. She had spent the last 13 years as a global director at the Fort Worth eyecare company. While employees knew that the 2011 acquisition of Alcon by Novartis had transformed the beloved local company into a profit-driven machine that saw employees as numbers, Dickerson said the news left her emotionally battered.

“It was devastating,” Dickerson recalled. “I was the first female global director in the organization. I had so many friends there and a love for the company. It was devastating. Things went through my head like, ‘I’m a failure. What are people going to think of me?’”

The need to support her two children, even with a working husband, left Dickerson worried about things that she had taken for granted, like being able to pay the mortgage.

“It took a week or two to work through that raw pain,” she recalled. “It was a moment where I could either wallow or I could get up and fight another day. Anyone who knows me knows that I am a fighter. I immediately took a venture finance course online to learn about raising money. I started sketching out business plans.” 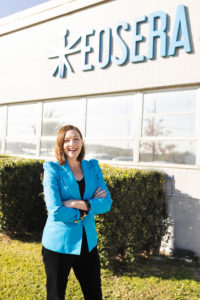 Flash forward several years, and it’s evident that Dickerson has successfully used that painful event to build something with a bright future. Sitting in the conference room of Eosera, a Fort Worth-based biotechnology company with 20 employees and a growing national portfolio of products, Dickerson was joined by her business partner, Joe Griffin. A few months after Dickerson was let go, Griffin was caught in the same wave of Alcon layoffs that were intended to maximize corporate profits. The two friends and longtime colleagues began planning their next business move.

Griffin, who has a Ph.D. in toxicology, remembered those conversations starting around values and culture. Both biotechnology workers were left emotionally pummeled by their abrupt terminations from a company that they thought would reward their years of earnest labor.

“What can we do to make a better work environment?” Dickerson asked Griffin during those early conversations.

The venture that would become Eosera, they agreed, would be based on a simple principle: Treat people the way you want to be treated.

Our employees “feel valued and empowered every day,” Dickerson said. “In big companies, we got to the point where we felt like numbers, like we were there to deliver the bottom line to them. You didn’t feel like you mattered as a person. It sounds so simple. That is how we lead, and that is how we treat anyone who comes in this door. When we make mistakes, we share with the group and try to teach them that there is value in authenticity. Bringing your true self to work instead of what you think they want is often lost in corporate American.”

But even the loftiest of business missions need a useful product.

Griffin, who handles clinical design and research as Eosera’s chief scientific officer, said the early months of the company focused on listening to medical professionals.

“We took advantage of relationships we had with healthcare professions, looking for any opportunity we could to have lunch or any meetings we could have” with physicians, Griffin said. “We were basically asking them what was missing from the market or what would make their practice or a consumer’s life easier — low-hanging fruit that no one else was paying attention to.”

The overwhelming response, the business co-owners found, was a need for a better ear wax removal product. For various reasons, busy doctors didn’t see removing ear wax as a good use of their time, Griffin said. Being able to recommend a quality home remedy topped the needs of the healthcare professionals Dickerson and Griffin spoke with.

The business partners worked out of UNT Health Science Center for the remainder of 2015. Griffin collected ear wax from area medical practices and got to work learning about which chemicals and solutions would best dissolve or dislodge the waxy material.

“We tried hundreds of combinations of ingredients,” Griffin recalled. “We landed on a couple of formulas that would break down wax better than anything in the market.”

As Griffin dug into the science of ear wax, he learned that the waxy compound varies from person to person but basically consists of dead skin cells and a secretion from the ear canal’s modified sweat glands. The material that coats the ear canals slowly flows outward, he said. Under ideal conditions, the slow movement of ear wax naturally cleanses the ears.

The system in the ear canal is different than anywhere else in the body, Griffin explained. There are several ways that the system of ear wax secretion can break down and lead to buildup in the ear that can cause discomfort and temporary hearing loss. Some people overproduce skin cells, ear wax, or both, according to Griffin. Clogged ear canals may be more prevalent in our modern era, he continued. Earplugs and listening devices that have become a common feature of daily life can obstruct the ear’s natural cleaning process.

While other areas of healthcare had evolved, the ear care industry was relying on decades-old devices and formulas. Once Griffin had developed a small portfolio of washing devices and ear drops, Dickerson needed to land those products on shelves.

In 2016, Eosera won a $50,000 prize from The Dallas Entrepreneur Center and Comerica Bank after winning a pitch competition.

“We were like, ‘Oh my God, we have a company,’” Dickerson recalled thinking of the time.

That award led to phone calls from investors. Eosera’s biggest break, though, came in 2016 when the company was picked up by CVS Pharmacy. Dickerson had 10 minutes to sell a CVS employee on Eosera’s new product, EARWAX MD. 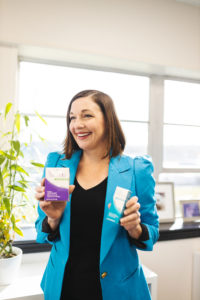 “I had an eight-minute pitch down,” Dickerson recalled. “I built the story around how there hasn’t been innovation in this category in decades. We are bringing innovation. I was asking to be in 2,000 stores. At the end of the eight minutes, he told me, ‘I love this. I want it in 8,000 stores, and I need it in three months.’”

Dickerson said she was simultaneously ecstatic and terrified by the news.

“I got to the rental car and called Joe,” she said. “I told him that I have really good news and really bad news. We had nothing at the time. We had a dream. We got on a plane and found a manufacturer. Our first production run was 80,000 units. We went from zero to 100 overnight, and that was just the start.”

Along the way, and as Eosera has expanded its product line, many of Dickerson’s and Griffin’s former colleagues have provided advice or answered technical questions free of charge.

“We are always willing to pay” for those consulting services, Griffin said. “Many times, they give us free wisdom. The bridges that we built can pay off in numerous ways.”

Dickerson said those moments are a commentary on how the co-owners lived out their professional lives. When you pay it forward, sometimes that goodwill pays dividends.

With this issues theme of building your future in mind, I asked Dickerson how it felt to be finally building what I thought was her lifelong goal. Interestingly, her answer wasn’t pegged to Eosera or any one project that she has or will work on.

“You are always building your future,” she said. “I don’t know where I’ll be 10 years from now. If you have a learner mindset, no matter what role you are in, you’re learning something and preparing for who knows what in the future. The future is unknowable, and you should always be open to possibilities and open to learning. We would not be able to do what we are doing now without that history. You are always hitting new peaks.”

“Yes, keep learning,” he said. “Make sure that you continue to build your network. If you never burn a bridge, I feel like life would be successful. I can always go to [former colleagues] to ask for help.”

Dickerson occasionally speaks to young entrepreneurs. At one such recent event, a student asked if it was a good idea to start up a business right out of college. Dickerson answered without hesitation.

“No,” she replied. “Go have experiences. Take different jobs. Nothing is forever. Use those experiences to learn. One of my jobs was literally taking price tags on and off garments in college. You have to stick with it. It taught me how I wanted to be treated. You learn so much in those less-than-ideal jobs.”

Eosera, once known as an earwax removal company, is expanding to include nasal products like Baby Nose Well, a nasal aspirator for babies and toddlers. Nose Well for adults is an improvement of the Neti pot — one that can be used without having to tilt your head. In the coming months, Eosera will be on shelves in Krogers across the country. As the product line expands to treat other areas of the body, Dickerson said customers will be introduced to a growing line of premium products. 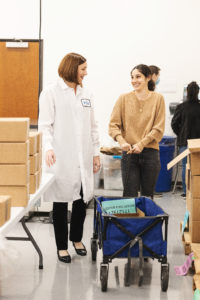 “Our overall mission is to bring healthcare products to underserved categories,” Dickerson said. “If you had told us that we would be where we are today, I would have said no way. The volume that we thought was crazy a year ago is super simple now. Right now, it is one bite at a time.”

Dickerson and Griffin are in the process of hiring two leadership positions. At the forefront of their minds, Dickerson said, is ensuring that Eosera’s company culture does not falter. The co-owners said that much of Eosera’s mission and culture was shaped by how they were treated toward the end of their years at Alcon.

Company culture is set by example. At the end of a long day, if an overflowing trash bin needs to be taken out, either co-owner does it without ordering menial tasks to workers. Treating visitors with equal levels of respect is another hallmark of Eosera work culture. The practice of putting people before profits is a model that Dickerson and Griffin said is part of the company’s success. The co-owners acknowledged that, one day, the company that they founded may be guided by a large corporate board and a team of executives. If the company grows the way that Dickerson and Griffin intend it to, then future Eosera employees will never be dismissed with something as cold as a FedEx letter.

“We think Eosera will outgrow us, but we have to leave it in good hands,” Griffin said. “The internal culture is non-negotiable.