The Art of Healing After Loss: A Family Portrait

Usually, people ask if Ale is Tess McDonald’s granddaughter or if Tess is Ale’s caretaker.

That’s what I assumed when I opened my front door expecting Ale’s mother on the porch and found Tess smiling at me. Ale and my daughter Maddie had become friends in their class at school, and I had only exchanged texts with “Ale’s mom” to arrange a playdate. With gracious awareness, Tess has come to anticipate the question she sees in the eyes of people who meet them.

Tess and Ale’s story is a story worth knowing, as are all stories about loss and the unexpected love that sometimes lies beyond it. 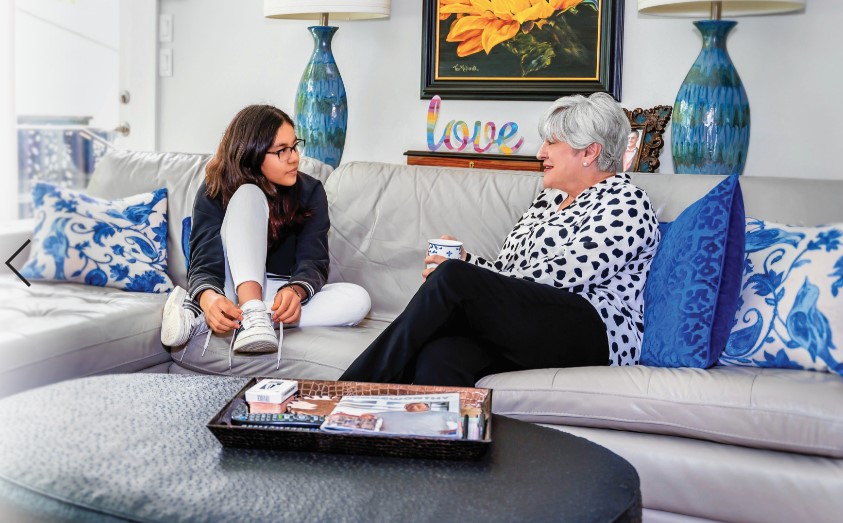 For over 30 years, Tess and her husband Mark shared what seems to have been an especially devoted marriage, raising two kids (Rachel, 30, and Chase, 31) and living in several different places while Mark worked as an engineer and consultant and Tess raised their children and worked in the nonprofit sector. At the age of 51, Tess discovered a love and a talent for painting, which Mark wholeheartedly supported. “Mark was my biggest fan, my cheerleader. He thought my work was wonderful,” said Tess. “I always painted for myself, but in the back of my mind I was always thinking, ‘I hope he loves it.’”

On the day after Christmas in 2017, Mark got up early to go on a hiking trip. He woke Tess up unexpectedly. She thought he needed her help remembering if he had packed everything, but he simply whispered, “Tess, I love you more than anything in this world.” Those were the last words he would ever say to her. While hiking in Fort Davis, Mark died suddenly of heart attack at the age of 55.

Tess couldn’t paint for a long time after that.

While Tess was grieving the loss of her beloved husband, on the other side of town, an eight-year-old girl named Alejandra (“Ale” for short) was grieving the loss of her mother, who had just died of cancer in August of 2017.  Ale was one of seven children, five of whom were living together in a precarious situation that would ultimately raise the eyebrows of their teachers and Child Protective Services. Ale’s church stepped in to help, which eventually led to a temporary arrangement with a couple who agreed to keep Ale and her older brother.

Meanwhile, Tess had been grieving Mark for three months. It was time for Fort Worth’s Spring Gallery Night, an annual event into which Tess had entered her art many times before. The custom had been for Tess and Mark to get half a dozen couples together to go to dinner and visit the galleries, but Tess’s heart couldn’t handle that. “I just couldn’t go without him. I didn’t want to… I was getting more and more depressed. It just took me down to my knees. I cried out to God and said, ‘Please, give me something significant to do in my life.’ I was just all alone, and I needed some purpose. So, I went to bed, and the next morning at about 10 a.m., my dear friend calls me and asked if I lived near the zoo.”

Tess’s friend was keeping Ale and her brother for the day and hoped Tess might join them to see the animals, but in retrospect Tess thinks her friend might have had an inkling of what needed to happen. “We never made it to the zoo. The kids played, and [my friend and I] talked about their situation,” she said. Tess volunteered to help, suggesting maybe she could keep the younger one, Ale, on the weekends. 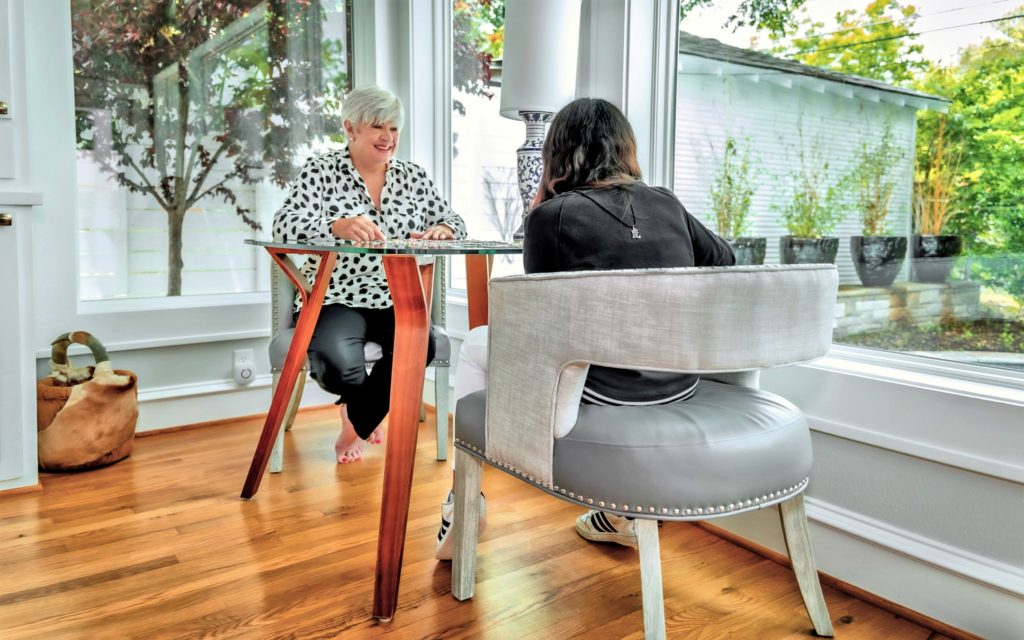 Ale and Tess began a new routine. Tess would pick Ale up on Fridays and drop her off at school on Mondays. The two got acquainted slowly throughout the rest of the school year, until the first week of June, when things came to a head. Ale’s dad, who was struggling to care for his children on his own, was feeling mounting pressure from CPS. He feared his children would be split up and dispersed by the foster care system, forever out of reach. A wonderful family in Weatherford had offered to adopt the older brother. Would Tess adopt Ale?

Tess recalls the moment that changed her life. “I put Ale down to sleep and told her I’d be back in 15 minutes to check on her like I’d do every time. There was an office in the room next door where I had been packing a lot of Mark’s things. Way back in the corner was a red duffle bag filled with things I wanted to save of his, special things. He used to wear different hats, and one of the hats was the one he always took when he went hiking. He had it on when he died. It was in the duffle, all zipped up and ready to take to the attic. I checked on Ale after a while — and she had the hat on her head! It just took my breath away. I just said, ‘Okay. I got it. It’s okay. Everything’s going to be okay. This is the right thing to do.’ I felt it was a way God and Mark were telling me that they were good with it, that this was the right direction for me. So I never really looked back after that.”

One day, before the adoption was officially underway, Tess began going through Mark’s huge stack of old journals. “They were mostly just prayers,” said Tess. “Just Mark talking to God, working out his problems and issues.” The very first journal she picked up was from June 2011. She opened it up and discovered he had been reflecting on the times in their marriage Tess had wanted to adopt a child. It hit Tess like a ton of bricks.

Adoption was always something she had wanted to do, but Mark had always had his doubts. Tess would be a fabulous mother, he wrote, but he wasn’t sure about the financial aspects or if it would be a good fit for the family. “We had serious talks about adoption through the years,” reflected Tess before admitting, “… we never could figure out the right thing. We have two children — so do we usurp the baby? Make the oldest child the middle child? What if we get a child that wreaks havoc on our family? I could never come to terms with it or feel comfortable with it.”

Suddenly here was another sign confirming the trajectory she was on with Ale, as if all the concerns she and Mark had shared over the years had finally been eliminated and the path made clear. The journals were a double blessing for Tess as she realized from his writings how much she had really meant to Mark. “I always thought he loved me, but the more I read in his journals, the more I came across, it was really incredible how much he loved me.”

It’s clear how Mark’s love continues to bolster Tess as she forges a new path without him, a path that can be challenging at times. As in any new relationship, things between Ale and Tess aren’t always perfect. “She was difficult when I got her,” said Tess. “Ale told me no to EVERYTHING. Are you hungry? Want to go to sleep? Want to play? NO, NO, NO.” But Tess was quick to observe, “You realize she is strong-willed and was always saying NO because she didn’t have a say in anything that was happening to her. She couldn’t make any of her own decisions. What could she do? She could say no. And it was a perfectly reasonable thing for her to do under her circumstances.”

Tess continued, “What eventually happened was I just had to come up with a lot of patience and focus on the beautiful things I was seeing. And part of that was our grieving together. That’s what kind of loosened her up. She would ask me, ‘Do you still cry about Mark? It was the first thing she ever asked me. I said, ‘Yes I do, Ale, almost every day.’ She said, ‘I cry about my mom.’ I said, ‘Yes I know, honey.’ So we would talk about her mom as her heavenly mom, and how I am her earthly mom. So that also helped. We clearly understood which mom was which. And I never ever let her feel like she couldn’t talk about her mom.”

In the past few years, Ale and Tess have found a nice rhythm together. The COVID-19 quarantine has ultimately helped bring them closer, and though their journey been difficult at times, they’re settling in together. “Ale is funny,” observed Tess. “She has a different sense of humor, but it’s funny. I let her put Kool Aid coloring in the tips of her hair. I let her wear more black than I would ever like. I try not to get into her room until I smell things,” Tess laughed. 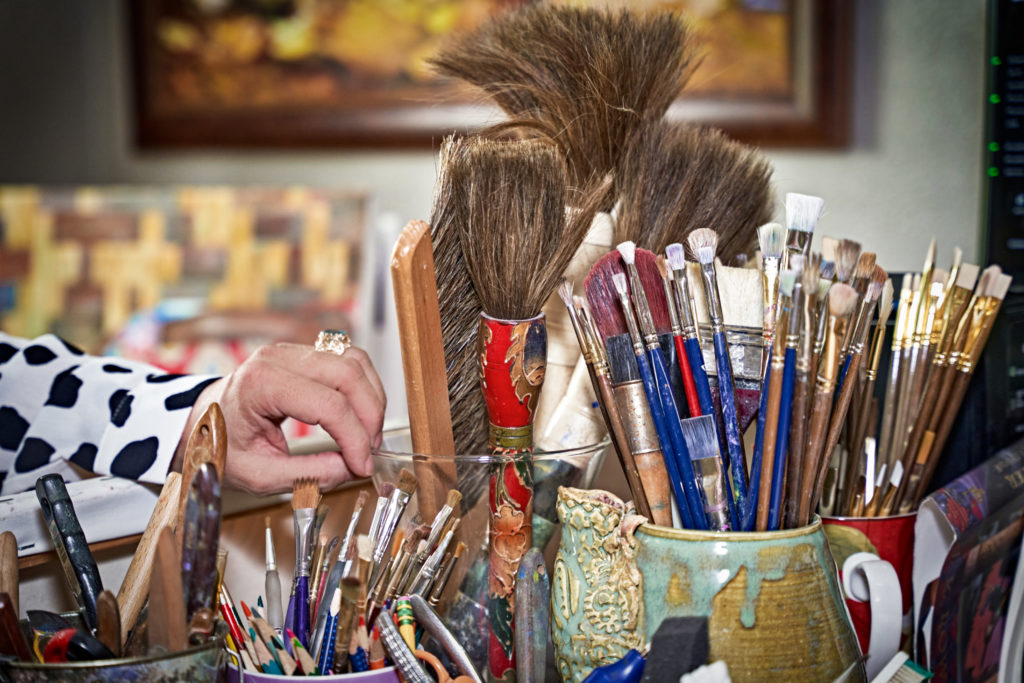 Ale, who coincidentally also has a skillful eye for art and drawing like her earthly mom, illustrated a picture of her new family for Tess when they first came together. It included Tess’s older children, their dog… and Mark. One thing Ale has been adamant about: she will not let Tess give her art lessons, which doesn’t faze Tess. “Ale’s found a home, but what she really did was find a home in my heart,” she said. “And because of that, she knows I’m not going anywhere.”

Since adopting Ale, Tess has begun painting again, converting Mark’s old office into an art studio. She has also renovated her home, adding a family room onto the back of her house as well as a pool so Ale would have a happy place to bring friends. “I just thought if I’m going to have this kid, I’m going to put a pool in my tiny yard!” she laughed. “It’s been wonderful. It’s the best thing I’ve done.”

Tess’s grown children, her seven brothers and sisters, and her 99-year-old mother all have been incredibly supportive and helpful with Tess’s transition from widowed empty-nester to new mom of a tween girl. “Rachel and Chase had questions about it,” said Tess, adding, “The typical advice for someone who has lost her husband is not make a big decision in the first year. But I was really grateful that no one said, ‘You can’t do that.’”

I asked if parenting Ale was different from how she parented Rachel and Chase. “I think it’s very different,” Tess said. “My children were more compliant! I had them from Day One, so they knew what’s what. Also, I had Mark to help guide me. I’ve found what works on one kid doesn’t necessarily work on another.”

Ale, who just finished her fifth-grade year, loves swimming, playing piano, skateboarding, doing puzzles, and, of course, drawing. “I love Tess because she is very kind and supportive of me,” Ale said. (Ale still calls her “Tess” and not “Mom.”) “I also love her cooking and her smoothies. I really like our life together because I have a room all to myself, a dog that I love, and we take fun vacations!”

“I just don’t know what I’d do without her,” said Tess. “I have a reason to get up every morning. I have someone to love.”