The Magic of Storytelling: Julio César Cedillo in Front of and Behind the Camera

Listening to Julio César Cedillo talk, it’s easy to get caught up in the magic of the storyteller.

Cedillo is an eye-smiler. When he’s delighted with something (and he frequently is – his sense of humor is both witty and mischievous), his eyes crinkle up, his smile widens even more, and a laugh booms out. That kind of humor is charmingly infectious.

Conversations with Cedillo range far and wide over a variety of topics. He’s a natural-born storyteller and debater. In our conversations, we’ve talked about politics, acting, history, politics, childrearing, philosophy, and did I mention politics? And we’ve talked photography. For while Cedillo has carved out an accomplished and well-respected career as a character actor in television and films, it is his photography that keeps him grounded.

Especially now that the global pandemic has made his day job even more difficult than it already is.

Cedillo was born in Durango, Mexico. His family moved to the United States, settling in Fort Worth when he was four. The family home was in the Diamond Hill neighborhood on the north side of town. “I grew up in Fort Worth, but I spent summers with my aunts and uncles and family in Mexico,” Cedillo said. “I’m a Mexican, and I’m proud of it, but I’m also a Texan, and let’s face it, there’s something about being a Texan.”

Cedillo was fascinated by actors and acting from an early age. He mimicked the voices of the actors in classic movies he saw on television, unconsciously learning English phonetically as he did so. His love of the theater continued through high school, even though he attended the science/engineering program at Paul Laurence Dunbar High School.

When asked why he didn’t attend Diamond Hill-Jarvis High School, Cedillo’s face darkens a little. “I went to Meacham Middle School,” he said. “There was a lot of gang activity at that time; it was a rough place. When I was in seventh grade, I was in the cafeteria, and I saw the vice-principal get stabbed. My family and I decided I needed to get out of there, so I took the exam for Dunbar.” 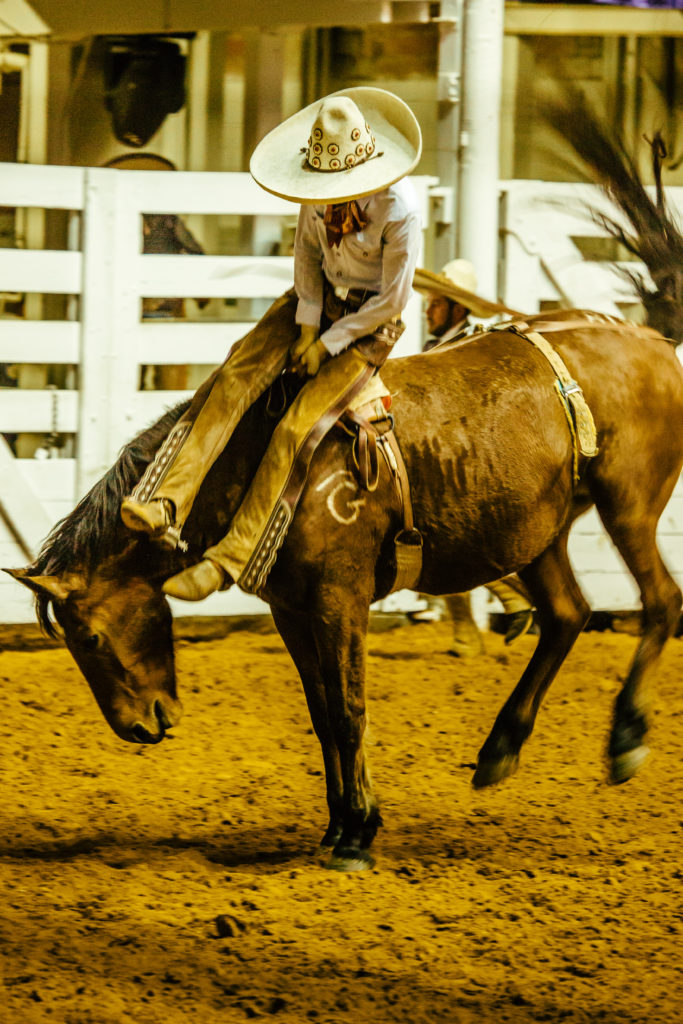 Cedillo was originally slated to be part of the television and film magnet program with a focus on animation at Dunbar High. “I really loved to draw,” Cedillo says with a rueful smile. “But right before I went, they dropped the program. But I was already in, so I just stayed. I was this theater kid pretending to be an engineer among real scientists and engineers.”

It was in high school that Cedillo really learned about acting. He was an enthusiastic member of the apprentice program at Casa Mañana and performing seemed to fit him to a tee. After graduating from Dunbar, Cedillo headed across the Metroplex to attend the KD Studio Actors Conservatory in Dallas.

Cedillo said, “A lot of people ask me for acting advice. I think that [instead of going to an acting school] it’s better to go get an acting coach. It’s better to go take acting workshops. Most theaters do summer workshops and camps – take them, use them to find out if it’s for you.

“When I went [to KD Studio], I was crazy. I was hardcore. I was not an easy person to deal with because I wanted to be the greatest actor in the world. Looking back, I wish I had given myself a break.”

But that intensity must have worked. Mari Lyn Henry, a casting agent for ABC, saw some of Cedillo’s work from KD Studio and invited him to attend an acting workshop in New York City. Thinking he had made it, Cedillo headed up to the Big Apple. 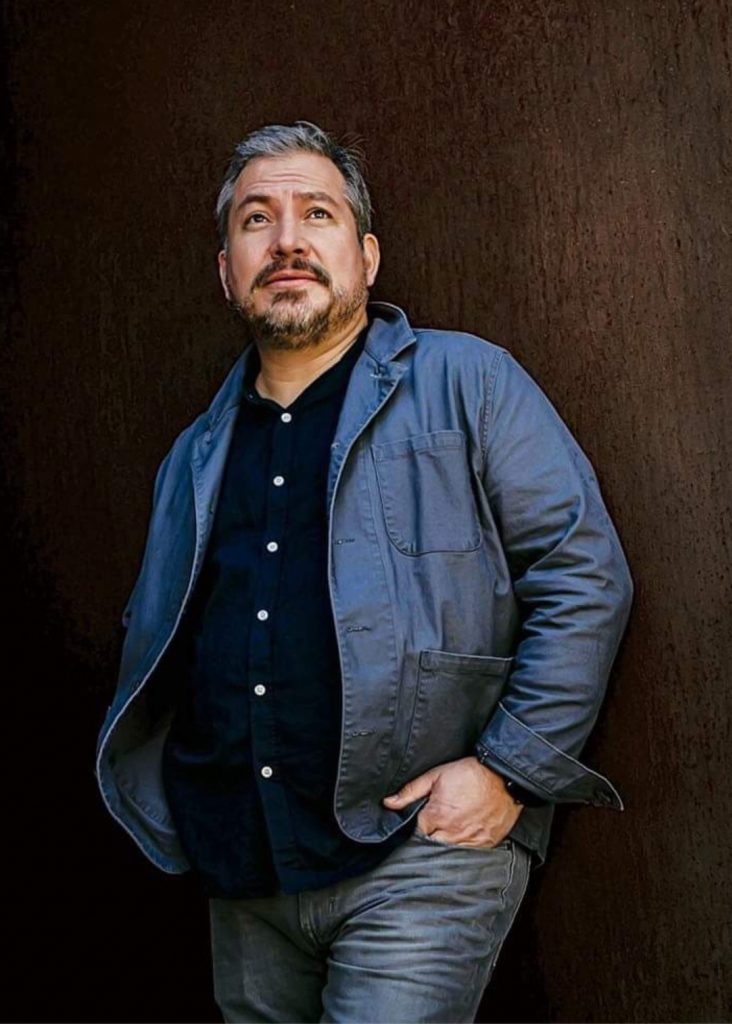 New York wasn’t exactly welcoming to a kid from Fort Worth. After kicking around for a couple of years, auditioning for everything he could, Cedillo decided to return home. It was when he came back to Fort Worth that his career as an actor really started.

While filming commercials for both the Spanish and English television markets in Texas, Cedillo was cast in the made-for-television movie Finding the Way Home. While possibly not the biggest television event of 1991, Cedillo got to work with both George C. Scott and Héctor Elizondo. Cedillo laughs, “After all that work in school, I got to be schooled in acting by George C. Scott!

This philosophy of being present, of being relaxed has obviously served Cedillo well. A glance at his page on IMDB.com reveals an incredible range of roles over the past 30 years, from television to film. One of his first jobs was as a regular on the 1990s children’s hit Wishbone. He has worked with Harrison Ford and Daniel Craig (Cowboys & Aliens), Tommy Lee Jones (as the title character in Jones’ feature film directorial debut, The Three Burials of Melquiades Estrada), Benecio del Toro (Sicario), and Diego Luna (Narcos: Mexico). He is a series regular on the CBS All Access series Coyote, starring Michael Chiklis. 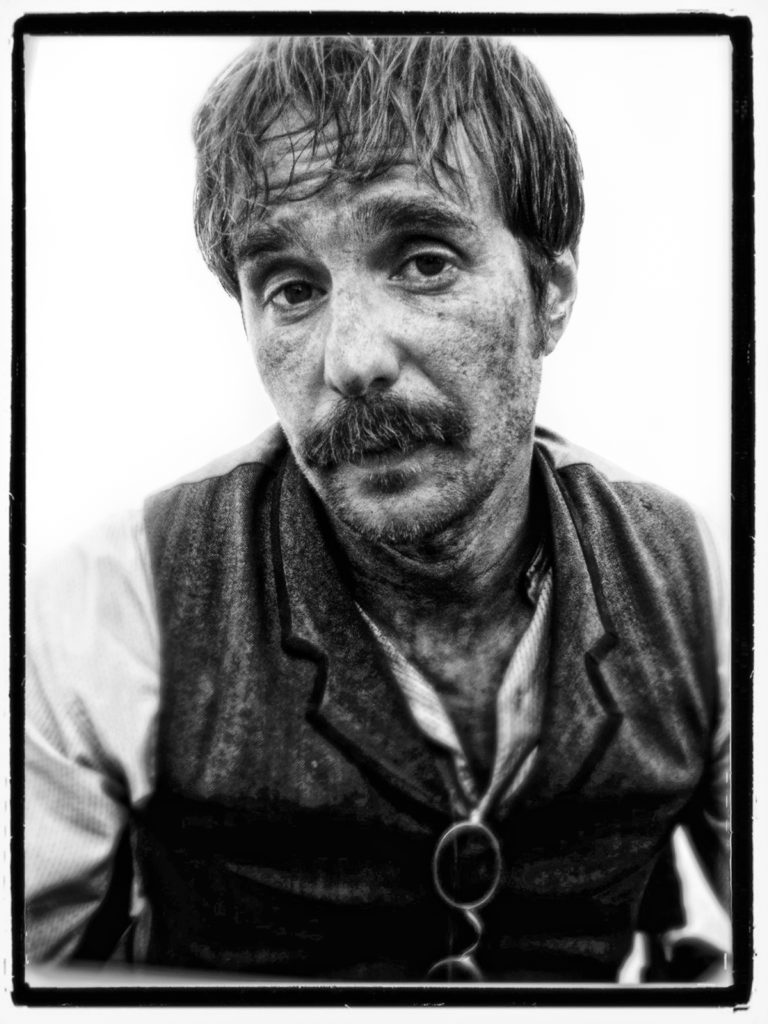 And it was on these sets that he started to learn more about his true love, photography.

When Cedillo starts to talk about photography, his smile gets wider and wider, and his eyes almost disappear, he’s smiling so hard. He also admits that he gets “real nerdy, real quick” when talking about it. He can’t seem to help himself; he is head-over-heels in love with the art form.

“It’s all about light,” Cedillo declared. “It’s about manipulating the light to get the best image you can and tell the best story you can.” On a film set, most actors, unless they are the lead and are in every shot, have a lot of time on their hands between takes. Many actors take pictures as a way to document their work or as a way to simply pass the time. It was on the set of Problem Child that Cedillo first became aware of this phenomenon.

“I was an extra on Problem Child… and Michelle Richards, another extra, asked me, ‘Why aren’t you taking pictures?’ I told her I didn’t want to overstep my bounds, that walking around the set with a camera seemed almost narcissistic, but she said told me, ‘Those pictures aren’t for you… they’re for your legacy… for your children.” The thought of leaving a legacy for his three children made Cedillo stop and think.

Cedillo started watching the crew while on set. During the filming of The Three Burials of Melquiades Estrada, he watched cinematographer Chris Menges set up shots using light to compose the image. The Academy Award-winner explained how to see the effects of light on a subject. 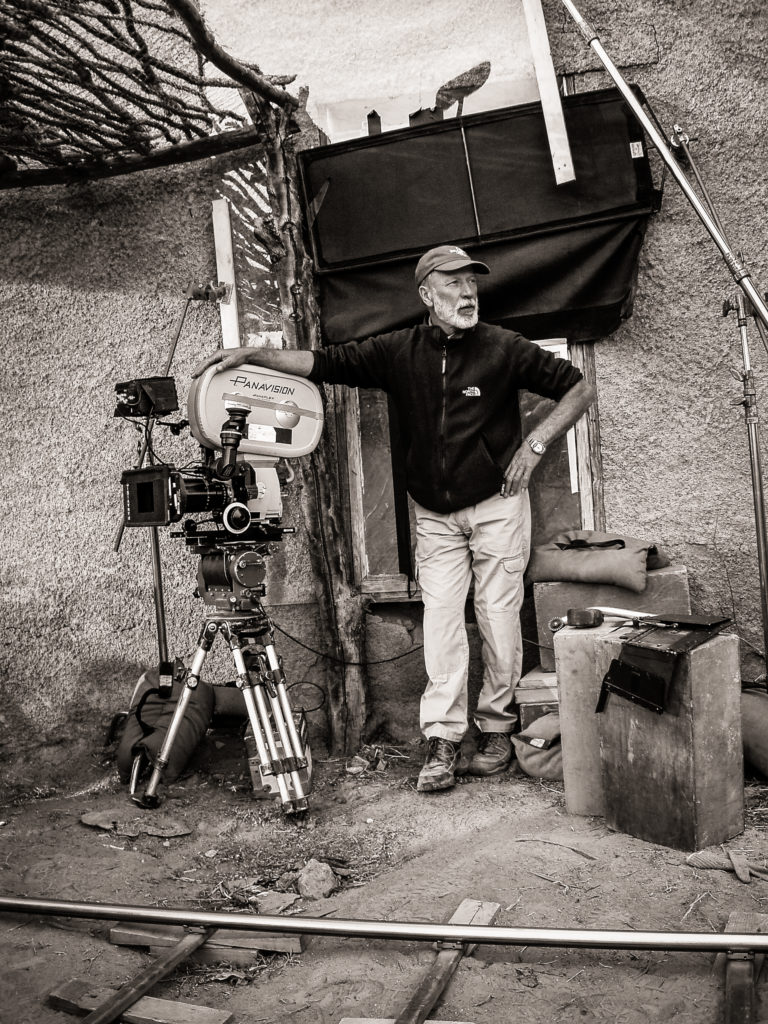 “Chris told me to hold up my hand,” said Cedillo. “Make a fist. Spin around 360 degrees in a circle and watch how the light makes shadows. Pay attention to what part of your fist is highlighted and what isn’t.”

And thus, a self-proclaimed “light nerd” was born.

Cedillo’s photographs are beautifully composed. While his approach to his subjects is loose and at times spontaneous, his images are striking and linger in the mind’s eye. It is his almost obsessive attention to light and shadow that elevates his photographs from simply documenting his experiences on set and on the street to art.

Although he loves nothing more than poking around behind the scenes with a camera, Cedillo is adamant that his first priority on set is doing the job they hired him to do. “I’m not there to be a photographer. I’m an actor. I do my job first, and then I pull out the camera.” By the time he starts photographing his fellow actors and the crew, he’s demonstrated his work ethic. The cast and crew know him. He’s one of them. And they’re flattered that he wants to document them.

So impressive are his photographs that Cedillo’s co-stars regularly ask him to photograph them. He photographed the stars of Cowboys & Aliens in the tent that served as a green room. Eva Longoria, who worked with Cedillo in 2014’s Frontera, was so taken with his photos that she asked him to be the set photographer for her short film, Out of the Blue, filmed for Ron Howard’s and Canon USA’s Project Imaginat10n.

It is Cedillo’s fascination with people and their stories that informs both his acting and his photography. While our conversations are delightfully discursive and full of laugher, he is profoundly uncomfortable talking about himself. When asked a direct question, he’ll answer it willingly enough, but he quickly segues into a story. Maybe it’s about the time he was flying with Harrison Ford and Walton Goggins in Ford’s helicopter (he jokingly offered his gas card when an alarm went off during the flight – it turns out Ford was flying a little too low). Or perhaps he will talk about working with a young Wes Anderson, as well as Luke and Owen Wilson, on the set of Anderson’s feature-length directorial debut, Bottle Rocket (it seems Mr. Anderson’s cinematic vision wasn’t always so recognizable). The storyteller isn’t comfortable in the spotlight. 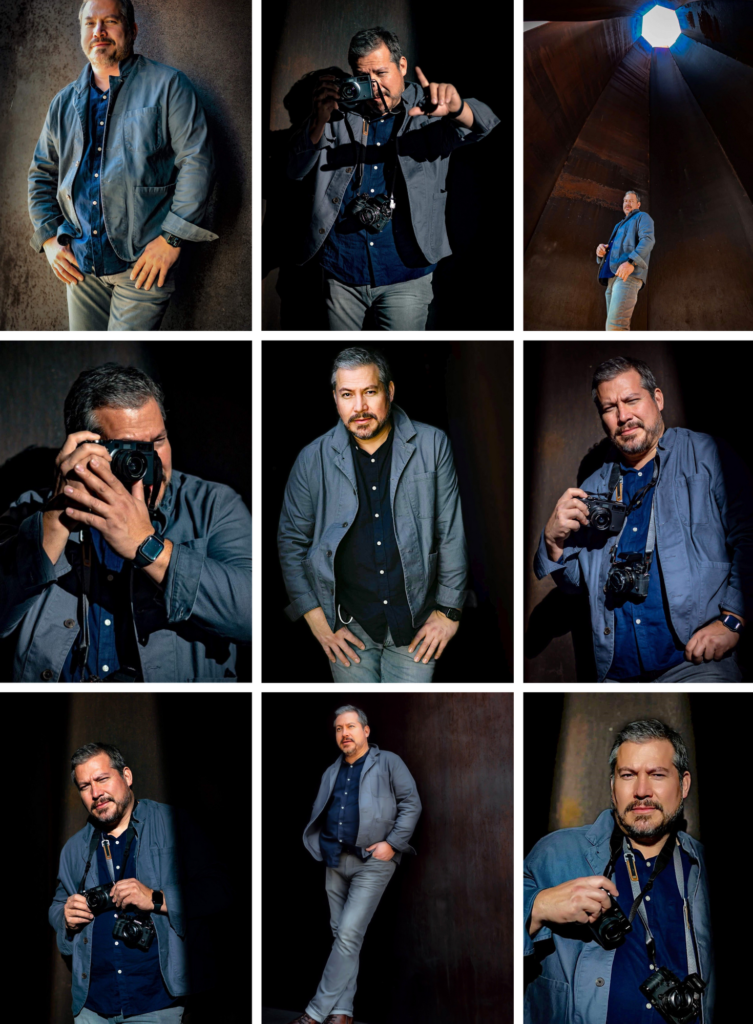 When Cedillo met the photographer Carolyn Morris to take the pictures for this article, he quite literally couldn’t contain his enthusiasm. He had earlier suggested that Vortex, Richard Serra’s 67-foot-tall steel sculpture that sits outside of the Modern Art Museum of Fort Worth, would be a fun background to use. “The light inside is incredible!” he kept repeating. He brought out his cameras, and he and Morris compared techniques and experiences. The two spent time hunting out interesting shadows and angles while Cedillo discoursed on his favorite photographers. It was obvious that he would have preferred to be behind the camera, although he made sure that Morris always got the shot.

Perhaps it is this discomfort with the spotlight, as well as the love of a good story, that makes Cedillo such a good character actor and such a good photographer. He is on the set to do a job, which is to facilitate the telling of a story. His characters might not be the lead, but they are essential to the story.

His photographs serve to tell the subjects’ stories. In fact, his photos have a rather cinematic quality about them. They are out of time, without location. They could have been taken in Mexico or Texas or Los Angeles, in 1911 or 1961 or 2021. They work on the viewer’s imagination, which is exactly what Cedillo wants. 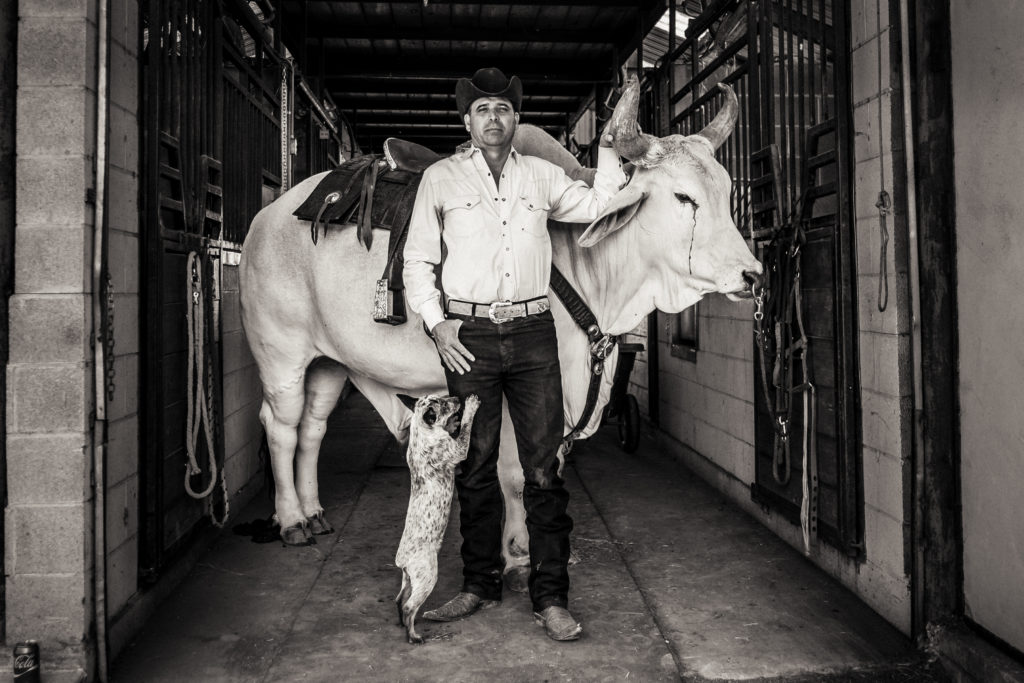 Perhaps it is the fact that Cedillo grew up “neither here nor there” that makes his photos and his acting so resonant. “When I was in Mexico visiting relatives, I wasn’t Mexican enough. I was too American. When I was in Texas, I was too Mexican.” He was an artist in a science and engineering magnet school. He was a scrappy kid from Diamond Hill busting his hump to find work in New York City.

He was an outsider.

Outsiders are wary. Outsiders watch. More than watch, they observe. They find ways to survive and thrive in what are sometimes hostile circumstances. They become adept at camouflage, to the point that they can blend in with the crowd. But above all, outsiders survive.

Cedillo is a survivor. After working steadily for 30 years in what is an extraordinarily cutthroat business, he has learned to trust his instincts, honed by his experiences, to tell his character’s story in the service of the film. “Each film has its own tonality,” Cedillo said. “Every character has its own shades of color.” 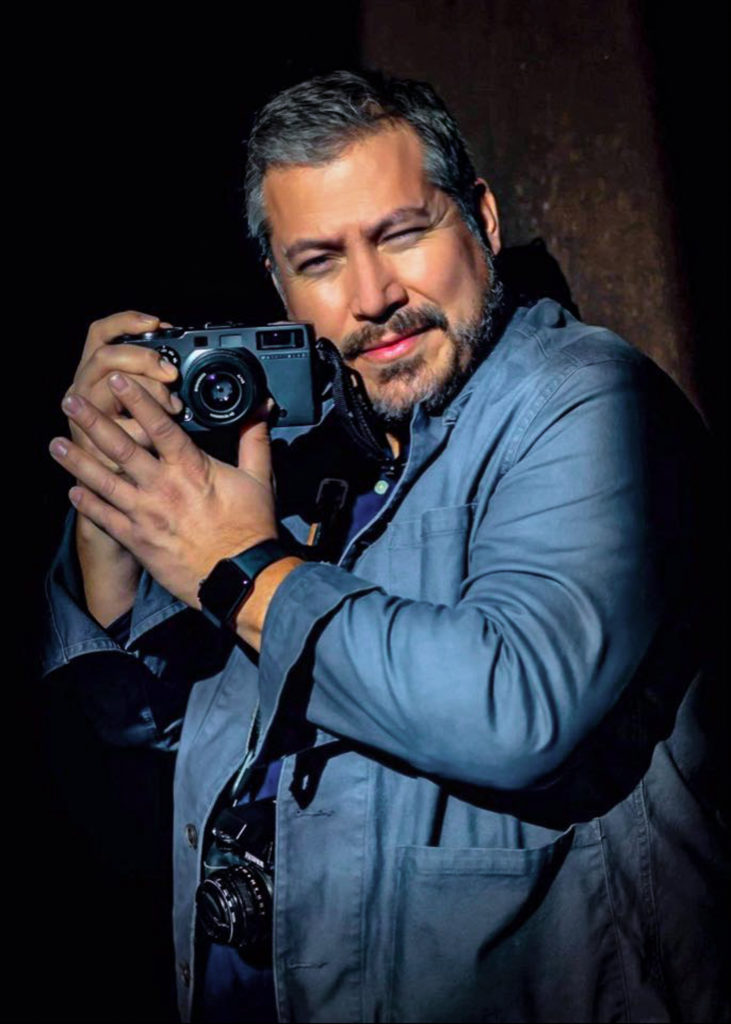 Walking out of the interview, Cedillo was stopped by a waiter. (Our conversation took place on a restaurant’s patio, socially distanced.) The waiter, a young Hispanic man, shyly asked if Cedillo was the person who played Calderoni on Narcos: Mexico. “You’re that guy, right?” Cedillo admitted that he was, and the two talked excitedly for a few minutes, finishing the conversation with a couple of selfies.

As we left, Cedillo couldn’t stop smiling. “That’s why I do this,” he beamed. “That’s what it’s all about.”