Not Fade Away: A Review of Casa Mañana’s The Buddy Holly Story

“And the rest…will just be rock and roll.” This is the last line of the show in Buddy: The Buddy Holly Story, now playing at Casa Mañana. It could also apply to almost the entirety of Act II, which is an unapologetic homage to Buddy’s greatest hits. Casa’s Buddy is a satisfying portrayal of one of rock’s founding legends, a young man who held unswervingly to his vision and died too soon, but not before bequeathing us with the likes of “Peggy Sue” and “That’ll Be the Day.” 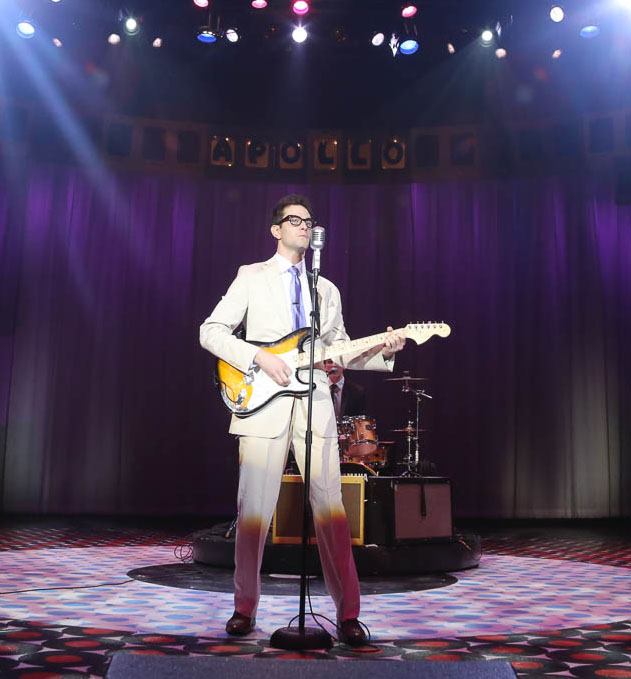 Back in 2015, I appeared in Casa’s Buddy alongside returning veterans Andy Christopher, Addie Morales, Matt Allen, Cheryl Allison, Brian Mathis, Steve Gagliastro and Troy Valjean Rucker in what was a particularly exhilarating theater experience for me. In a quick scene, I got to play “Peggy Sue” herself, and I can tell you that there are few things as fun as doing a juke box musical where everybody in the audience is on the edge of their seat waiting for “their” song, and when it comes, singing along with it. And while I wasn’t a Buddy Holly fan before doing the show — was he, like, Elvis? — by the end of the run, I couldn’t get his songs out of my head. I had even learned to play the spoons!

So it was strange and wonderful to be seeing everything front-ways, from the audience’s point of view, with no wigs, lines, harmonies or choreography to worry about. It felt a little too easy, and perhaps not as much fun. My nostalgia aside, the show was everything I’d hoped it would be from a theatergoer’s perspective; especially if said theatergoer is of the Buddy era and grew up staring at his black glasses on a well-worn album cover. 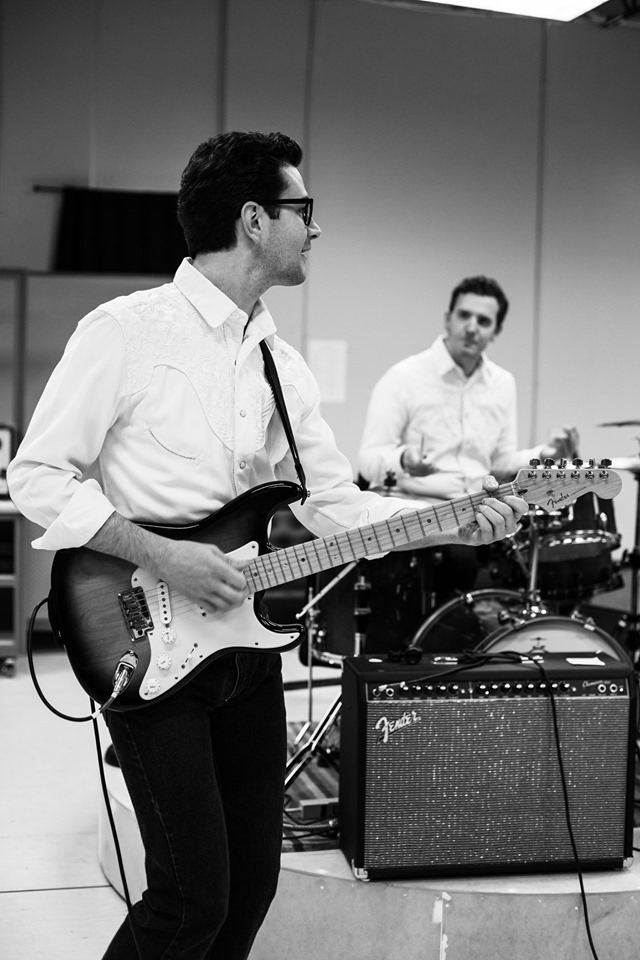 It’s hard to imagine a better Buddy than Andy Christopher. He’s done it countless times on the national tour in addition to his Casa runs and multiple regional productions. Andy is adept at so many things, not just the musical imitation of the legend himself — which feels less like an impression and more like an organic interpretation — but in his ability to turn a line humorously and naturally. I just loved his chemistry with Casa wunderkind Addie Morales, now based in NYC, who reprises her role as Buddy’s young wife Maria Elena. Cheryl Allison also reprises her role as Vi Petty, the spunky wife of Buddy’s music producer, Norman Petty (played this time by a superb Steve Gagliastro, who takes on that role along with several bit parts he tackled last time); she dominates the keyboard and serves up the humor along with mugs of black coffee and cheeseburgers for Buddy and the band. It’s so delightful to watch old friends give a memory new life. Bravo.

(Clearly, I’m biased, but this doesn’t mean I am WRONG.)

The musical direction by Vonda K. Bowling was strong and driving, providing each iconic song its due balance and essential character. Parker Esse, also new to the production, directs the show with a lovely, lively pace that carries us moment-to-moment with clarity. Casa legends Tammy Spencer and Catherine Petty-Rogers do not disappoint with their on-point costuming and wig magic. (I happen to know the exquisite quality of those silky pink backup-singer dresses.)

To be frank, I didn’t feel like seeing this show on Saturday night. I had just spent four hours in another theater rehearsing another show, and I was ready to sit in a quiet place with windows and no props (I hate props), where I could escape the frenetic energy of theater-making. But I was quickly reminded that rehearsals are very different from performing. I hadn’t been around an audience all day, and audiences are oxygen. A combination of the people surrounding me had created a beautiful habitat — the bearded gentleman with the Crown and Coke to my left and the long-haired teenager in front of me and the lady on the end of the aisle tapping her right foot. We had become an ecosystem. In Buddy Holly especially, the audience is a key character, stirring up the magic in the air and throwing it back up onto the stage for the actors to absorb and reflect. By the end of Buddy, you are literally an audience member — not at Casa Mañana — but at the Surf Ballroom, watching Buddy’s last concert in frigid Clear Lake, Iowa, the night of February 2, 1959, right before his plane went down. This imparts a certain rare (and yes, delightful) responsibility to everybody present, both on and off the stage. 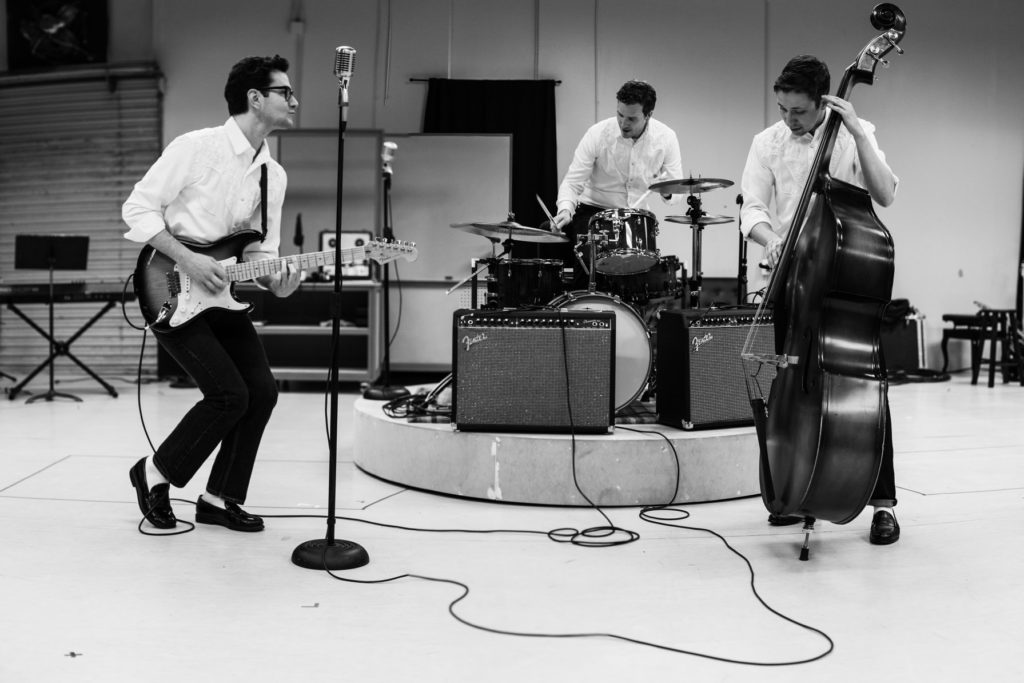 I recommend that if you cannot actually be cast in the show, to attend it because you’ll get a pretty comparable experience. Having done both, I can attest to this first-hand and I’m not sure which I prefer. I do know this: if you want a less immersive night of entertainment, better go see a movie downtown.

Buddy: The Buddy Holly Story runs through September 15 at Casa Mañana. Mild language throughout, but the show is suitable for most audiences.

Julie Rhodes has performed on many Fort Worth stages, including Casa Mañana, Circle Theatre, Amphibian Stage Productions, and Stolen Shakespeare Guild. She is mom to Drew (11) and Madeline (8), and to Eloise, the family pug. Visit juliekrhodes.com.