Texas Is the Obsession: The Perilous Texas Adventures of Mark Dion

I have said that Texas is a state of mind, but I think it is more than that. It is a mystique closely approximating a religion. And this is true to the extent that people either passionately love Texas or passionately hate it and, as in other religions, few people dare to inspect it for fear of losing their bearings in mystery or paradox. But I think there will be little quarrel with my feeling that Texas is one thing. For all its enormous range of space, climate, and physical appearance, and for all the internal squabbles, contentions, and strivings, Texas has a tight cohesiveness perhaps stronger than any other section of America. Rich, poor, Panhandle, Gulf, city, country, Texas is the obsession, the proper study and the passionate possession of all Texans. 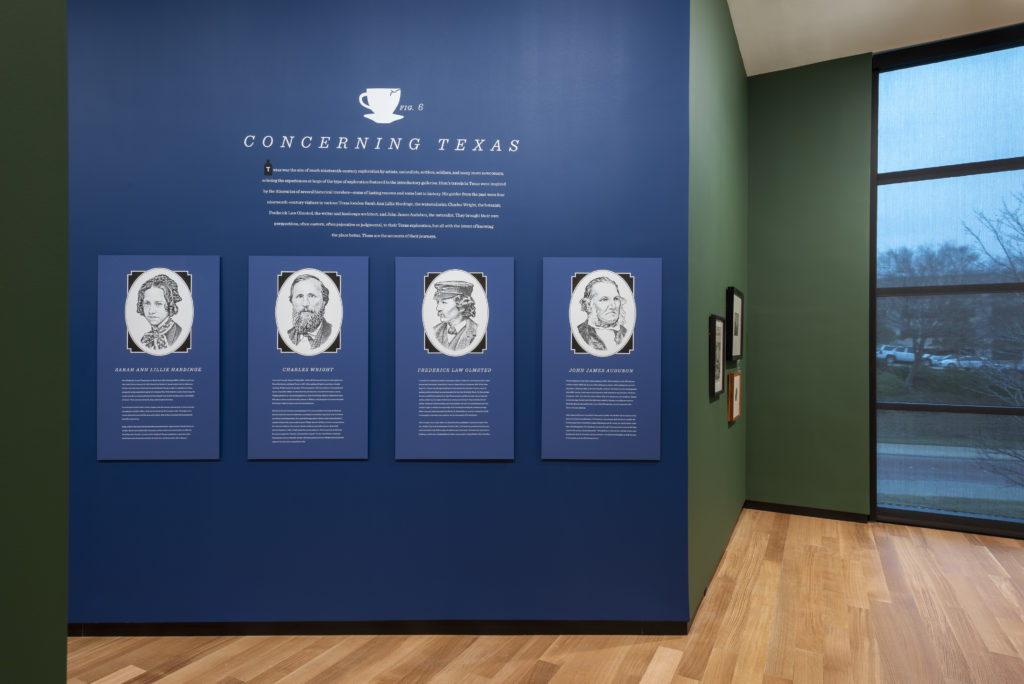 Texas in the nineteenth century was terra incognita for most Americans. But, as it does today, the idea of Texas loomed large in the country’s imagination. People set out to explore Texas, hoping to learn, to exploit, or to settle. In the archives of the Amon Carter are hundreds of works of art by artist-explorers to Texas, which gave the Amon Carter’s Curator Margaret Adler an idea:

What if a modern artist could follow in the footsteps of a few historical travelers in Texas? Could an exhibit be created combining the art and writings of the nineteenth century artists with the writings and art of a modern artist to create a large-scale installation?

The answer is an enthusiastic “yes.” 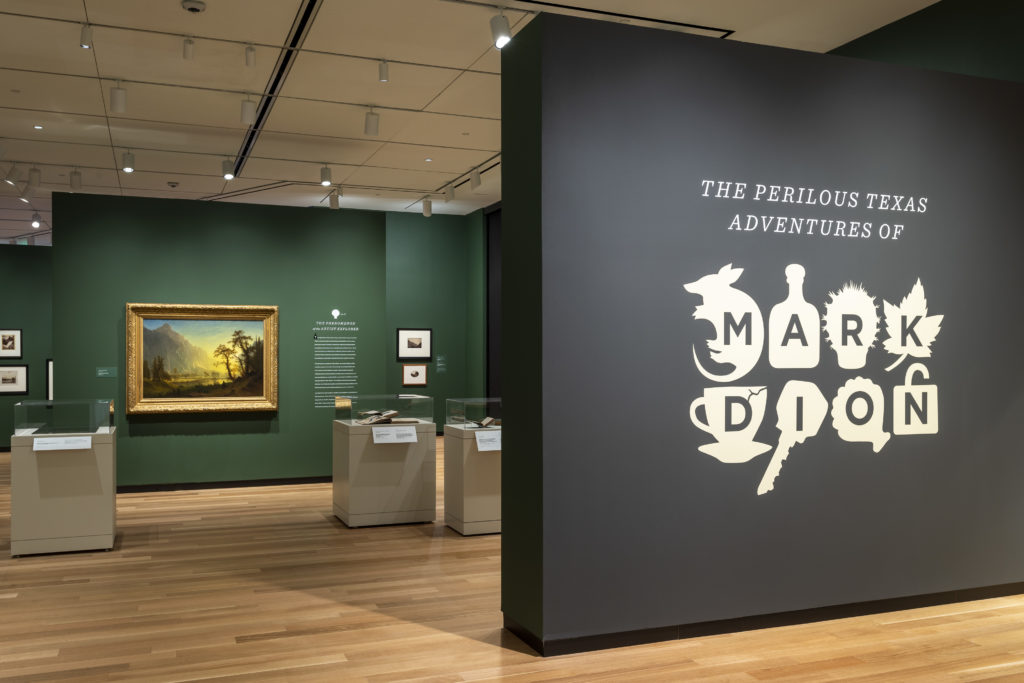 “The Perilous Texas Adventures of Mark Dion” runs at the Amon Carter through May 17. The exhibit contrasts the journeys of four nineteenth century artists with those of conceptual artist Mark Dion.  Dion, a collector of curiosities who is inspired by history and archeology, followed in the footsteps of Sarah Ann Lillie Hardinge, Charles Wright, Frederick Law Olmstead, and John James Audubon for two years, crossing the state, collecting.

“Basically, this is the story of four Yankees (plus me, another Yankee) who traveled across Texas. Three of them hated it. One loved it. Oh, and I loved it, too.” Dion said during a press tour of the exhibit.

The first room of the exhibit delves deeply into the archives of the Amon Carter, showing how the nineteenth century tourists to Texas saw the land, the people, and the animals. The second room focuses on the journeys of Hardinge, Wright, Olmstead, and Audubon, with paintings and letters, diaries, and sketches telling their stories.

Wright’s travels were beset with hardships and tragedies that wouldn’t have been out of place in a melodrama. Olmstead comes across as a dandy, sniffing that the beds weren’t soft enough and the food wasn’t good enough. Audubon, who came to Texas with his son, loved everything about Texas, while Hardinge, a Bostonian lady whose pictures are some of the earliest images of Texas before statehood, underwent enormous tribulations while trying to collect on an inheritance left to her by her brother. 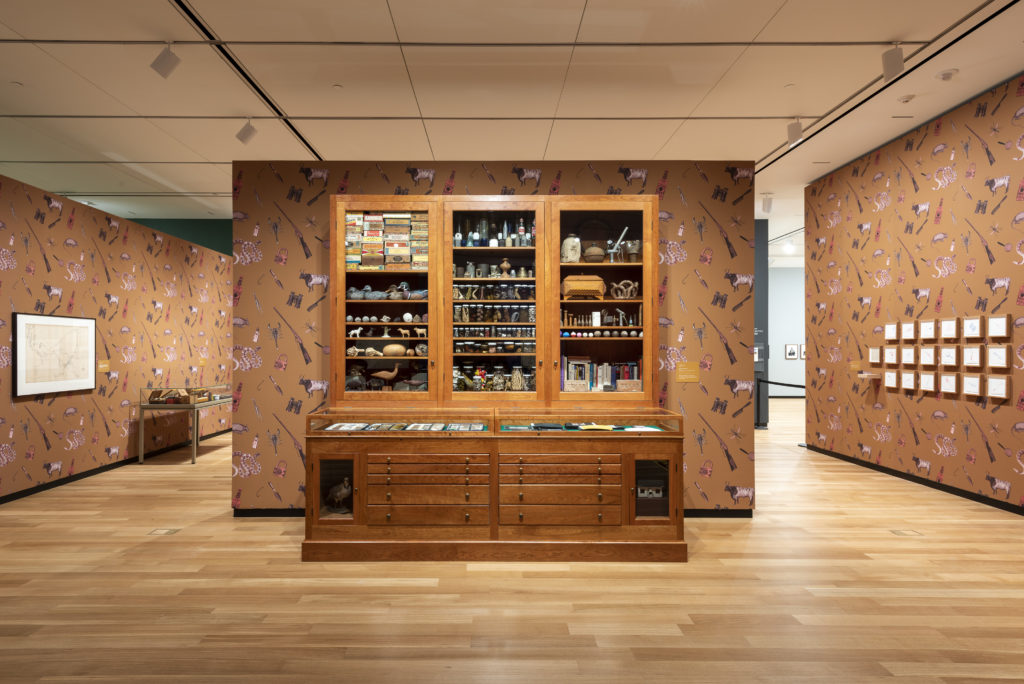 The third room of the exhibit is Dion’s installation commemorating his travels. The first thing you notice is a large cabinet. Inspired by historical Wunderkammers, or cabinets of curiosity, Dion’s cabinet is full of the interesting, the grotesque, and the tongue-in-cheek. Snakeskins nestle next to plastic cow figurines, while a buoy sits on a shelf with gourds. The cabinet “is an oscillation between the extraordinary and the everyday,” said Dion. “I try to take the Wunderkammer, the cabinet of curiosities and destabilize them.”

An antique child’s perambulator full of animal skulls, antlers, and horns sits next to a case of Dion’s pressed plants, a nod to Wright’s works. In one corner, a tarp full of tools that Dion took with him on his travels lies on the floor. “I’m interested not just what in they [the four artist-explorers] brought back but what they brought with them.”

Unlike any other room in the museum, the walls of this room are covered with wallpaper. Designed by Dion, it features a repeating pattern of stereotypical (and not so stereotypical) Texas images. A longhorn is next to a comb and binoculars, while a rifle abuts a mosquito, a magnifying glass, and a bottle of rye whiskey. Dion wanted to both honor and challenge visitors’ assumptions about Texas. 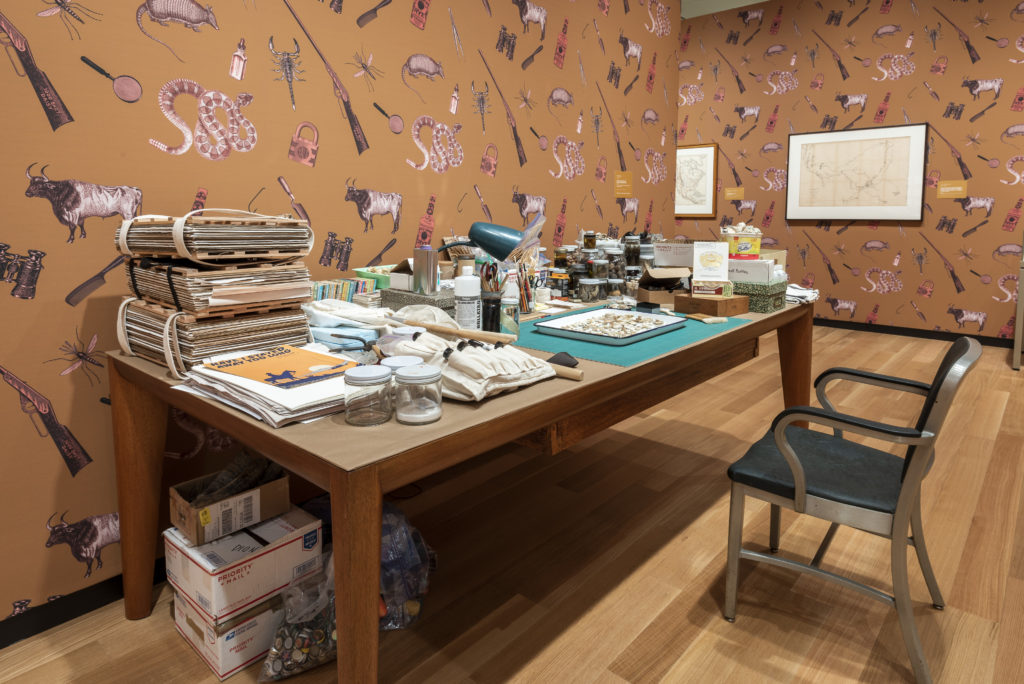 At the rear of the room is a desk. This is Elliott Porter’s desk, and Dion used it throughout the creation of the exhibit. Porter, whose works are currently on display at the Amon Carter, is best known for his photographs of nature, and he bequeathed his archives, including his desk, to the Amon Carter on his death. Dion used the desk to prepare his specimens, to chart his work, and as a final piece in the exhibit.

“There is something inherently strong about our adventures in travel,” Dion said, while Adler added, “There’s still something left to explore you if look properly.”

The Perilous Texas Adventures of Mark Dion runs now through May 17. For more information, follow this link.