by Lyle Brooks / February 6, 2020
Fort Worth Arts, Fort Worth Culture

Trinity Art Court: The Perfect Marriage of Art and City

The Blue Zones Project, a systemic push for well-being, came to Fort Worth in 2014, fostering initiatives to get folks moving around. The project has functioned as a uniting force throughout the city, and one of the coolest results of the process has been Trinity Art Court. 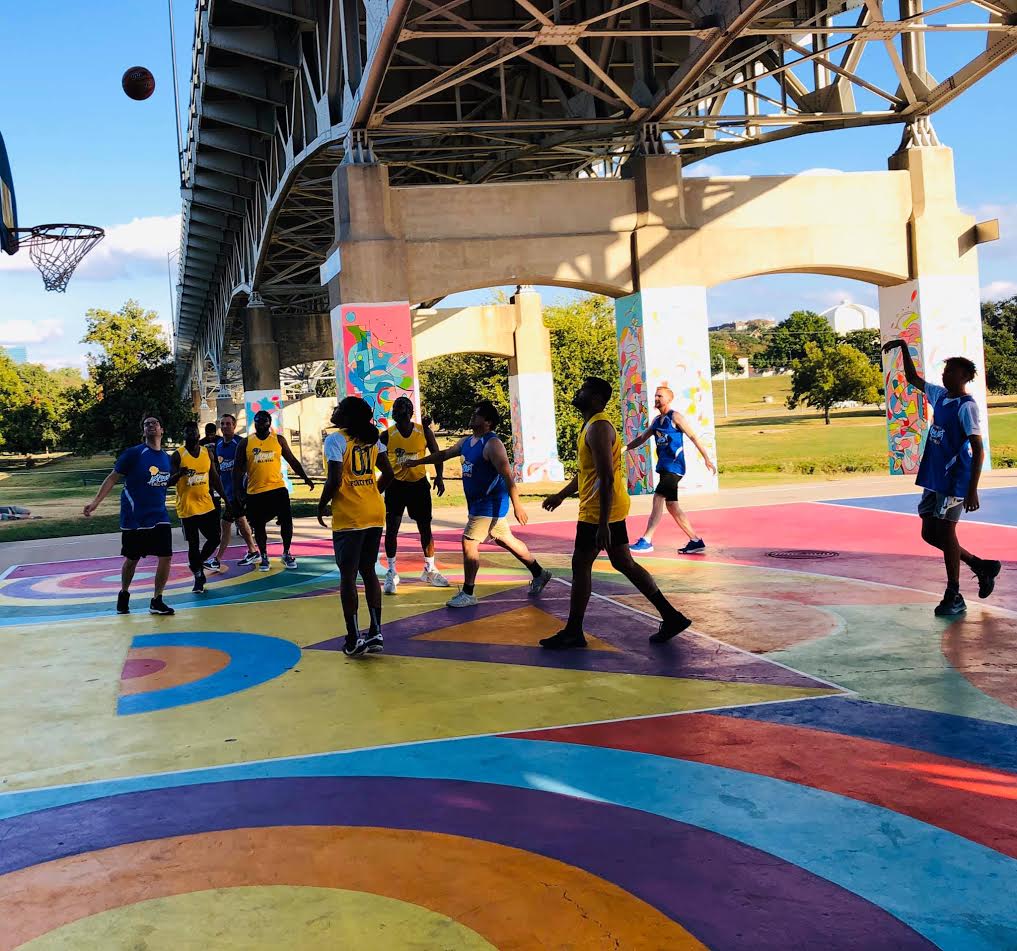 Blue Zones connected Ricky Cotto with Noel Viramontes, founder and owner of FWblackhouse, which was established to support the growing creative community in 2016.

“One day Noel said we should paint a mural on a basketball court. A mural like this has never been done in Fort Worth. Sure, they have them in other cities, but not here,” Cotto explains.

Cotto, leader of City Post Church, is dedicated to leading a congregation that contributes to the community. “Instead of investing in a building or items to focus on our personal comfort; all our resources are streamed back into the community, local ministries, and the Arts.”

City Post funded the project composed by local artist Arnoldo Messy, known for his mobile Artscream truck as well as the beautiful mural of the Northside Mariachi on the exterior of Franko’s Market. Ricky and his church organized the event surrounding the execution of the Mariachi mural, feeding more than 200 people as part of the endeavor.

Taking the Art Court concept to the city council, they were met with support from members like Ann Zedah who has helped them realize their vision. 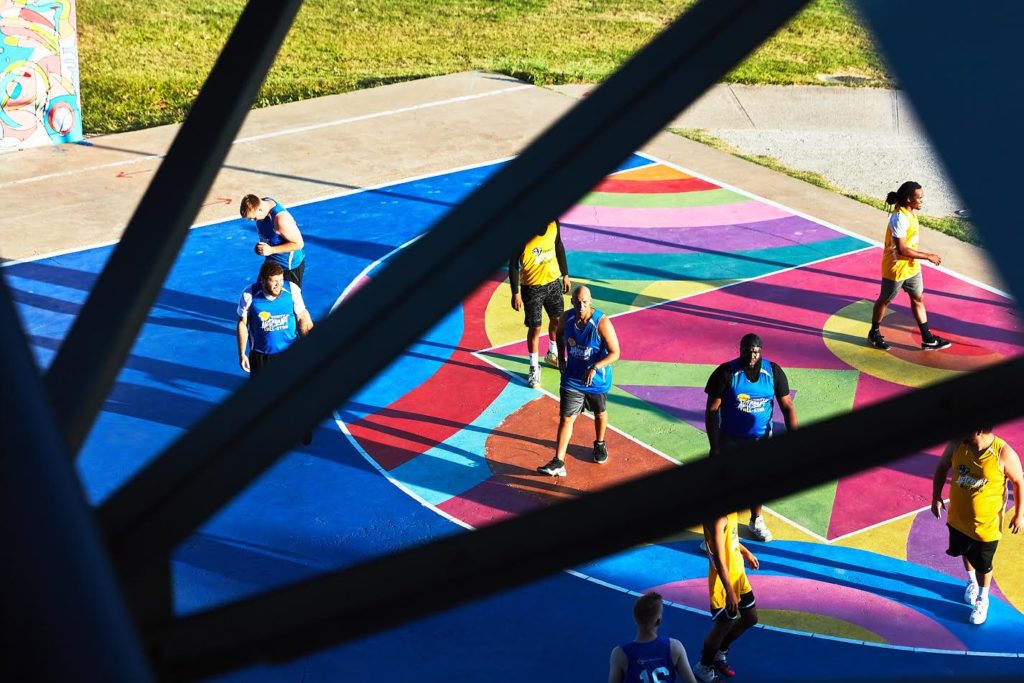 In March of 2018, after the schedule was pushed and they lost many of their original volunteers, a small team of three descended on the basketball court in Trinity Park, right off of Lancaster to cover the surfaces with Messy’s design and bright color scheme.

Throughout the five days, enhanced by the social networking prowess of Viramontes’ FWblackhouse connections, the group grew to creat something loud and impactful that would bring people together. The bright colors of the work acted as a creative beacon drawing people to participate, as Cotto explains, “Once we put the blue and pink down, that’s when people were like, ‘whoa, what is this?’ and started coming out to help.”

Near the Trinity Trails, it has hosted boot camps and yoga classes as well as events like the Fort Worth All-Star game, pitting local artists, including Leon Bridges and Abraham Alexander, against small business owners, like Race Street Coffee’s Aaron Latchew. Of course, they had a DJ to keep things bouncing; there are plans for more games in the future.

It has also become an ideal Instagram spot for folks wanting to show their support for arts in the community. The venue can be booked through the city and has attracted serious interest from all corners, holding events sponsored by Pabst Blue Ribbon as well as Blue Zones.

Cotto has an infectious positivity as he shares his vision, “We wanted to show that change is possible, because we know people can feel frustrated by Fort Worth being so old school. It is important for everyone to see that the city is open for change. We hope to transform the court every couple of years.”

This belief that the energy of a community can transform discarded places into zones of inspiration is strong with Cotto, he is impassioned as he describes the ADA-approved Dream Park – built for children of all abilities – also in Trinity Park.  “That was a big deal for Fort Worth and we finished up around the same time.” 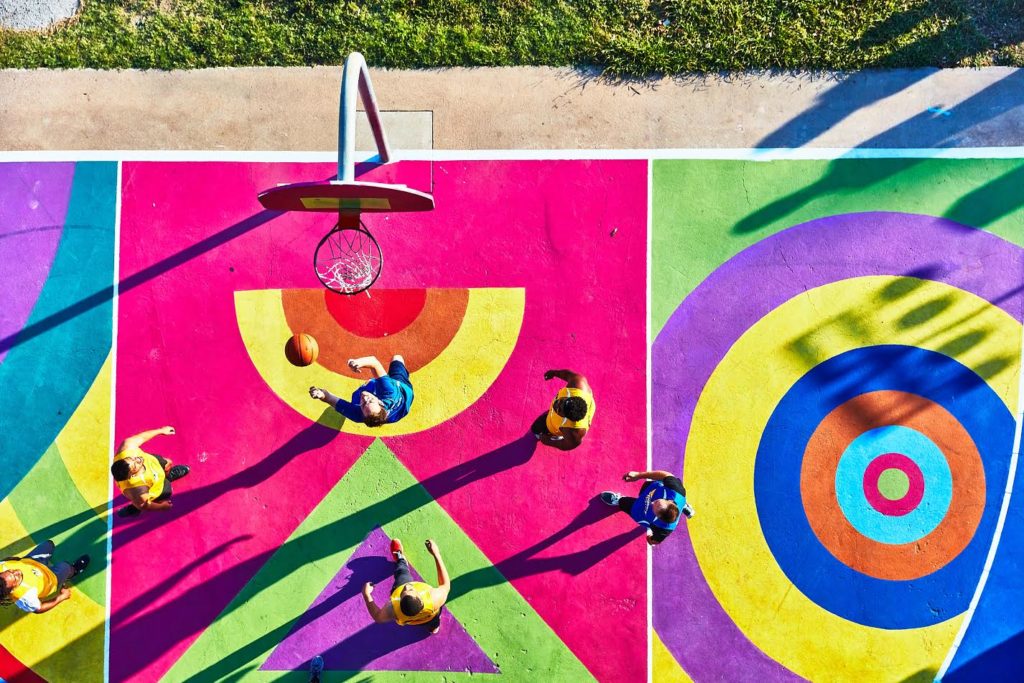 City Post Church will move to Riverside Middle School in April, where they have already recruited artist Tune for a pair of pieces that give students pride in their school, along with improvements around the building as part of their commitment.

Cotto’s drive and passion have led to a position with Texas Health Resources who oversee the Blue Zones Project as the Director of Community Engagement with a mission of improving lives across the city.