Bottom Blossoms & The Candle of Learning: A Working Mother Homeschools

This article was originally supposed to be about introducing my 12-year-old to New York City and Broadway for the first time. That trip was scheduled for June. I wanted to write about what it means for an actor mama to show her offspring her theatrical Mecca, waxing poetic about how the mystique of the Big Apple amplifies when we share it with kids. Right now, however, New York City is a pretty desperate place. 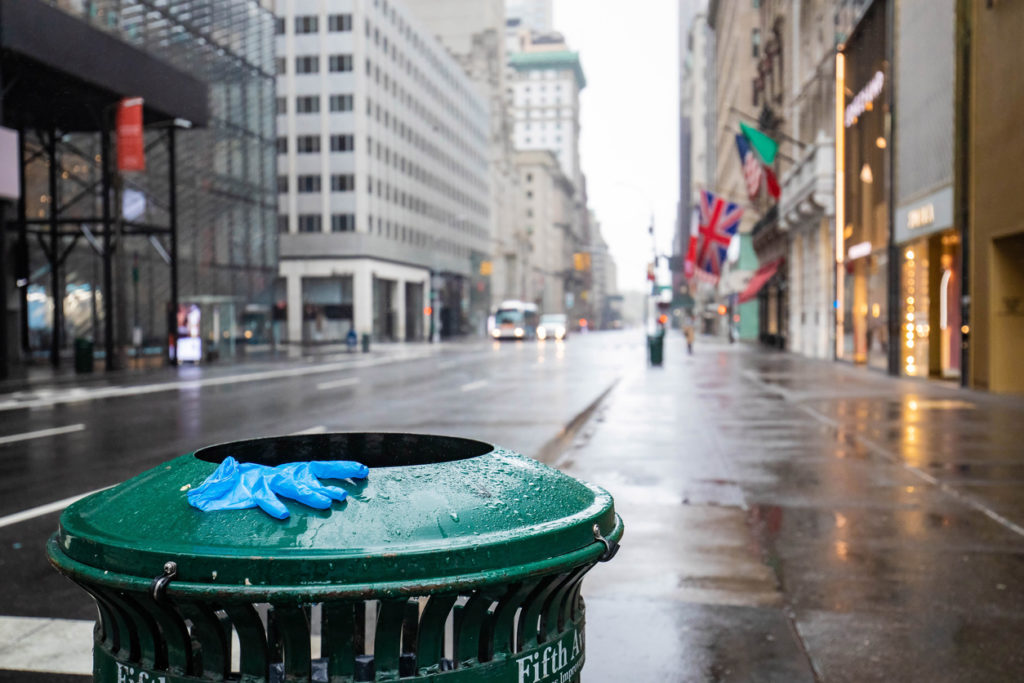 The trip has been cancelled. My acting work is on hold, and so many of my theater friends are struggling. Thankfully, though, I’m still a mama. And I’m homeschooling. I have gone from audition-prepping, show rehearsing, and performing to overseeing lowest common denominators and dividing numerators. I’m sure you’ve also been re-purposed in a lot of ways that clash with your operating instructions.

Before the school district came out with the guidelines and reassurances, the learning-at-home thing was a wheels-off effort. For us, it started with a spider. My 9-year-old daughter Madeline and I had just seen Little Women, and the first day of isolation, she came to me flushed with excitement, shrieking breathlessly, “Let’s homeschool in the ATTIC!” I knew this would not work because I do not have Saoirse Ronan’s hair nor her military jacket. Nor do I homeschool, which bears repeating.

We pulled the cord of the fold-down stairs in the hallway, inhaling flurries of insulation, and climbed unsteadily to the landing where a three-foot foam tarantula and adult skeleton were resting comfortably. Unfortunately, that plan didn’t materialize. However, I did come up with another idea for us however that was very holy and felt 1860s-enough, and that was to light a candle at the beginning of each day. We call it the Candle of Learning, and it has become an important ritual to the three of us, even if all it illuminates is the Minecraft screen.

In theory, I should have some genetic strengths in the homeschooling arena, given that my own mother bore five children and educated them all at home from 1987 through 2003, when homeschooling was still a fringe anomaly. (Homeschool Bonus: none of the McQuitty kids are currently incarcerated, and one of us is a missionary!) I have every possible advantage, thank God — a college education, a personal background in homeschooling, plus enough financial security to be able to re-direct my focus in a bigger way than a lot of people I know. I have no reason not to be Marmee-Except-with-Air-Conditioning-and-Half-the-Number-of-Kids. Honestly, the pressure might kill me.

After our failed foray into the attic, we set up shop in the kitchen, with a “COVID-19 DAILY SCHEDULE” taped to the refrigerator. A rogue mom on Facebook had cranked it out like some sort of emergency protocol, and my 12-year-old son Drew printed it off himself and mounted it where it could be seen, because he apparently plans to rule a small Baltic state with an iron fist someday. 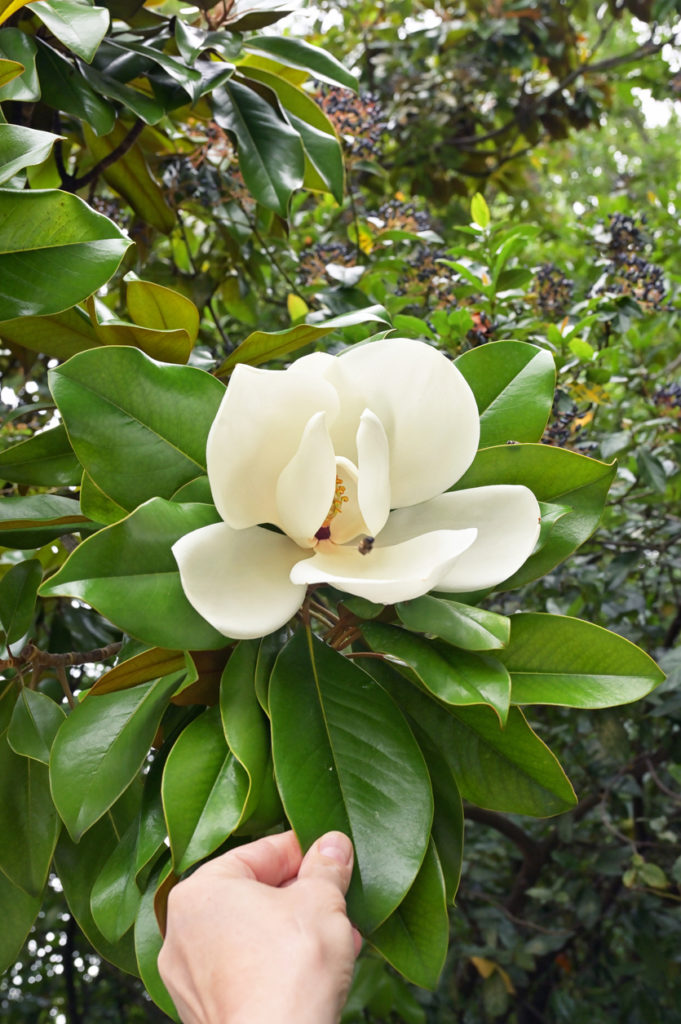 The first day, according to our COVID-19 DAILY SCHEDULE, we took a walk at 9 am. I found an excessive amount of satisfaction teaching Maddie and Drew the names of the trees. Oak, crepe myrtle, Bradford pear, pecan, magnolia… Those are the five trees I know, so I pointed them out. I also pointed out monkey grass and St. Augustine, because those are the grasses I know. Hawthorne and azaleas and holly are the bushes I know. I quickly learned Madeline was somehow under the impression that magnolia trees are called “Bottom Blossoms.” It took until Friday to iron that crease out of her brain. Another vocab word we learned on that walk was “cleavage,” though I can’t remember why. It was becoming clear this was to be a very organic process.

A friend’s kindergarten son told her he was excited to be homeschooled because he “gets to poop.” He doesn’t like pooping at school. My children are also taking full advantage of this newfound liberty, but it hasn’t really affected the COVID-19 DAILY SCHEDULE in any meaningful way.

The boldest, most swashbuckling segment of the COVID-19 DAILY SCHEDULE is Quiet Time for an hour and a half in the afternoon. I took a cue from an actual homeschooling mom friend who tells her kids they are not to disturb her during quiet time unless they are bleeding in a mortal way. If they have a question during quiet time, they may write it down and she will address all questions at the end. Don’t you just want to stand up and applaud this? When I presented these requirements to my kids, Drew was curious if he was allowed to “drink water” during Quiet Time. I said he could, although it wasn’t technically part of his COVID-19 DAILY SCHEDULE.

Of the all hilarious memes I’ve come across during this bizarre moment in history, a sincere and rather beautiful one caught my eye. “Parents: what we are being asked to do is not humanly possible. There is a reason we are either a working parent, a stay-at home parent, or a part-time working parent. Working, parenting, and teaching are three different jobs that cannot be done at the same time. It’s not hard because you are doing it wrong. It’s hard because it’s too much. Do the best you can. When you have to pick, choose connection.” (Emily W. King, Ph.D) 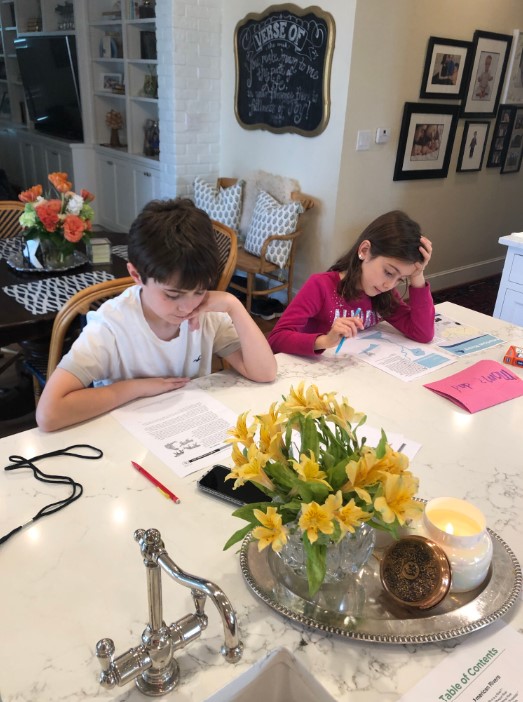 The time will come when I’m back on the stage with my friends pursuing this art form we love so much. I know New York City will come back in a big way, bright with million-light marquees, and that I’ll get to cross the thresholds of the Lyceum or the Nederlander or the New Amsterdam with Drew and watch him get all shiny with magic. We’ll all get back to a more honored version of normal that will, God-willing, include deeper affection and respect. If we haven’t done a lot of murdering by then. I kid. Sort of.

“You are much smarter than I remember,” Drew told me as I was in the midst of teaching him how multiply fractions. The Candle of Learning was glowing on the counter like a baby lighthouse.  “I haven’t seen it in a long time,” he added.

You know what? I took that as a compliment.

Wherever your lives are when you read this, I hope we’re all healthy. I hope we haven’t lost those we love. I hope we’ll have clearer eyes for seeing new and noble things — in each other, in ourselves, and in every Bottom Blossom.