Like many women, Cherissa Scott gave up her career when she married and had children. After a difficult divorce, she found herself without a job and with no work history for almost a decade. It was during the soul-searching and praying of her darkest time that the vision of Pablo’s Lotus was born. 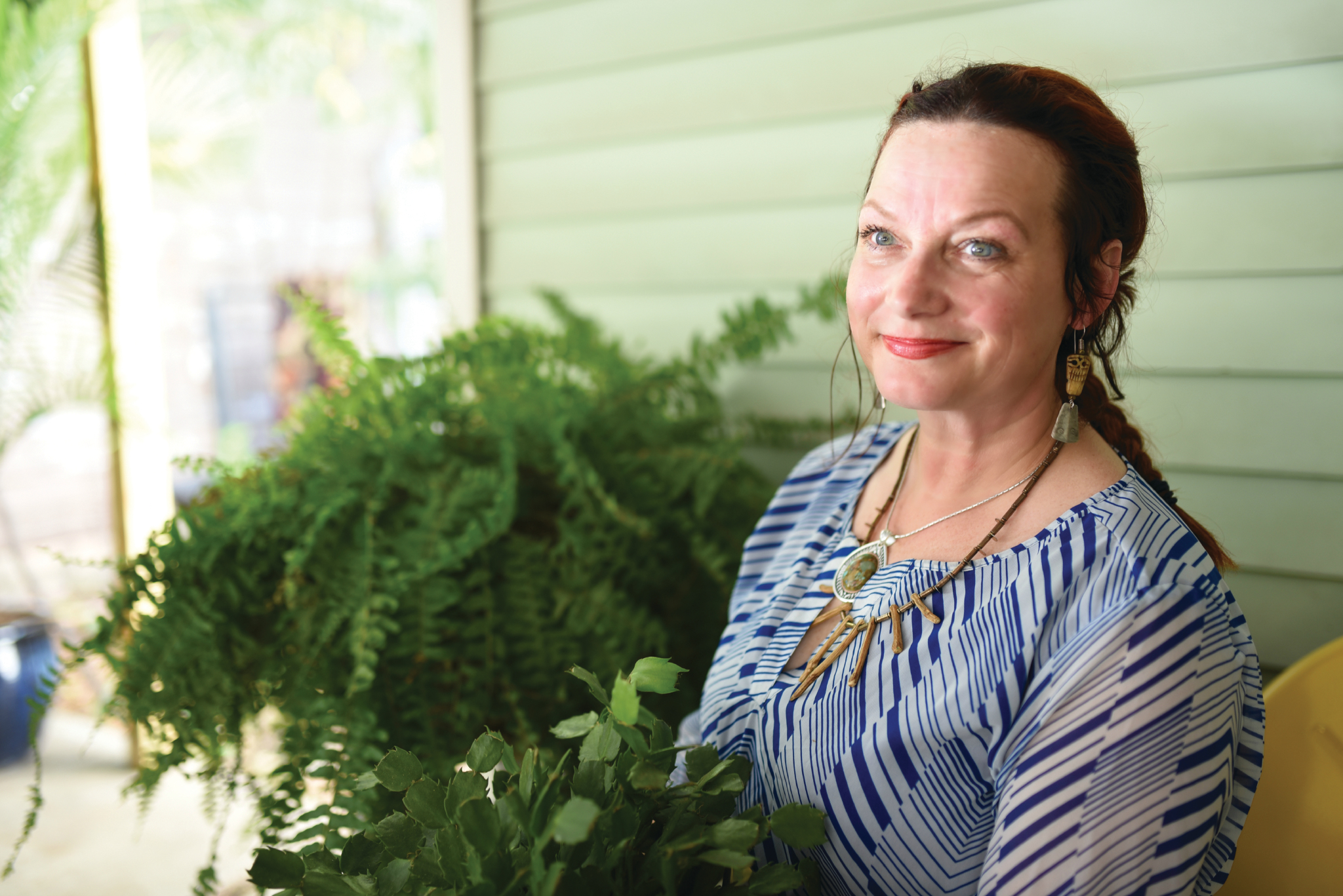 Cherissa grew up, like many little girls, fascinated by beauty and the beauty industry. However, as the daughter of a single mother, she did not have the means to buy beauty products. She was an artistic child; her art was her escape and her joy. When she was 16, she needed to create a major piece for the National Art Honor Society show. Inspired by Pablo Picasso, she created Pablo, a figure who has become a mascot, a doppelganger, and an animus for Cherissa throughout her life. Remember Pablo. He crops up again.

In 1996, Cherissa became an esthetician with Aveda. Founded by Horst Rechelbacher in 1978, Aveda was based on the ancient Indian system of medicine of Ayurveda. It was in learning about the herbs used in Aveda’s products that Cherissa first became interested in the healing power of plants. Eventually, she became a trainer, teaching others the use of these plant-based products. This interest in plants lead her to get a degree in Horticulture from Tarrant County College in 2001.

Cherissa started freelance gardening. She created container gardens for friends from church. She made fairy gardens for her children’s friends. As she started planting, her love of plants and their healing properties was re-awakened. This lead to a fascination with the soil the plants grow in and a realization that the soil covering the Earth is much like the skin covering our bodies. Both protect. Both are affected by what is applied to them. Upon realizing these parallels, Cherissa began to realize the direction her life would take. 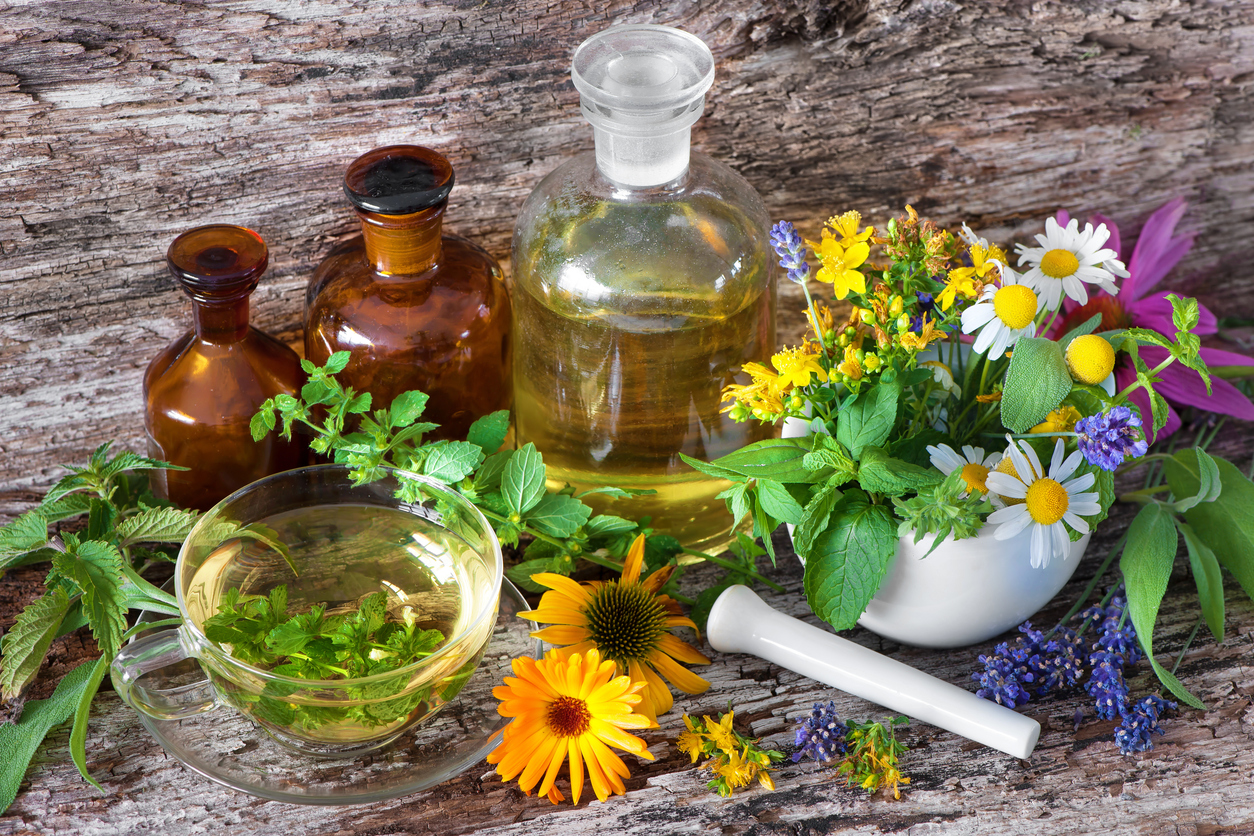 Pablo’s Lotus is an herbal apothecary. When she was trying to come up with a name for her new business, Cherissa knew that she had to incorporate Pablo, her childhood animus. Incorporating a farm-to-table philosophy (or in this case, a farm-to-bottle philosophy), the Lotus Collection from Pablo’s Lotus features homegrown healing herbs which are cold-infused into skin and body care products. The cold-infusion process, in which the herbs are allowed to steep for up to two weeks in the chosen carrier, releases the healing properties of the herbs gradually, allowing for a more natural product.

Cherissa says she creates her products “with an almost shamanic intent, embedding a spirituality into them.” She harvests the herbs by the light of the moon after she asks each plant for permission to use its parts. Cherissa prays as she creates her products, imparting a spiritual energy to the blends. Each blend is created using ingredients which are not impregnated with harmful chemicals. 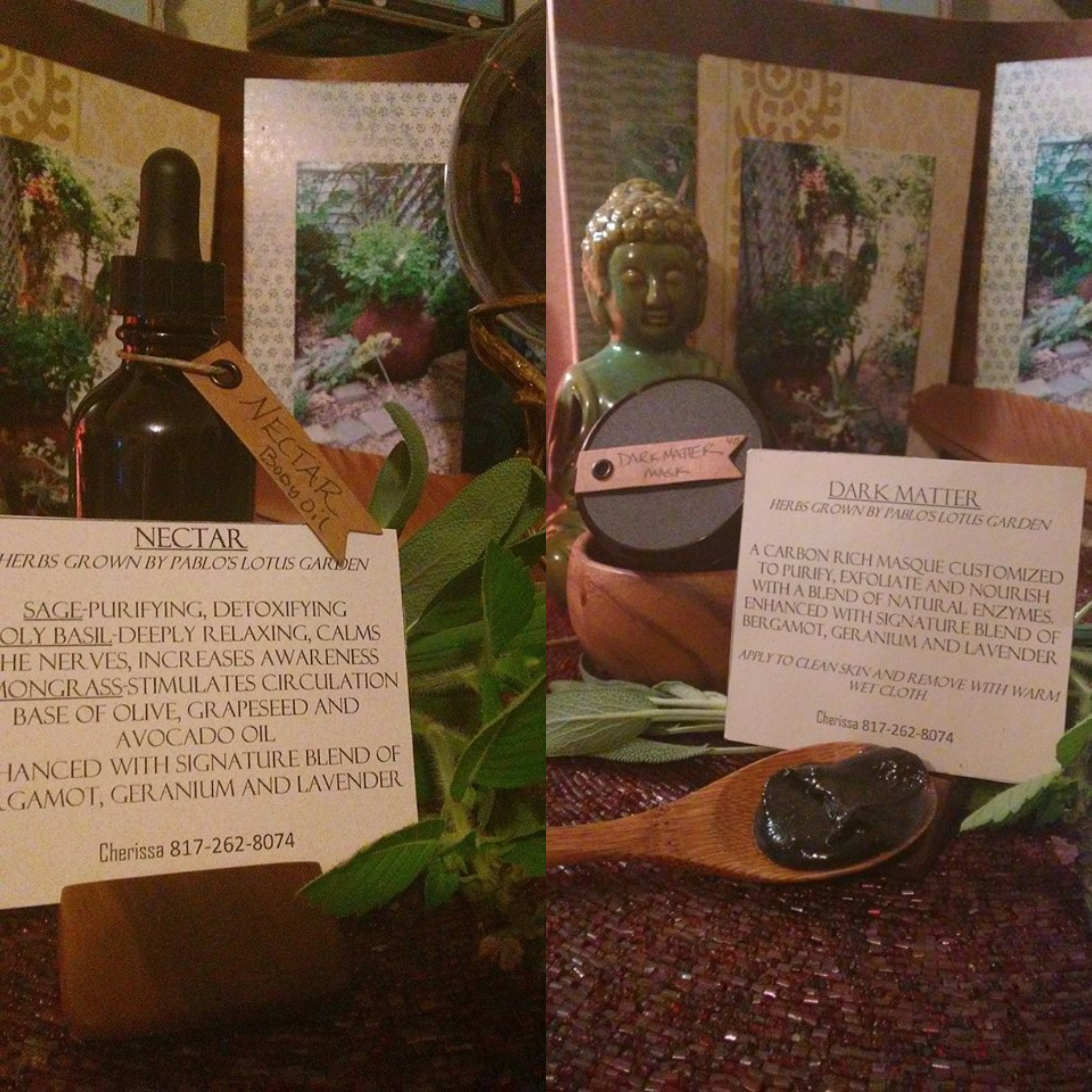 Two of Pablo Lotus’ most popular blends are Nectar and Dark Matter. Nectar is a body oil incorporating sage, lemongrass, and holy basil. Sage detoxifies tissue; lemongrass improves circulation; holy basil has been shown to decrease inflammation. Several local massage therapists are now using Nectar in their practice. (As an aside, the holy basil that Cherissa uses in creating Nectar comes from the very first plant she planted during those dark days when she was beginning to re-create her life.)

Dark Matter is a facial scrub which is rich in plant humate. Cherissa describes plant humate as “a carbon-rich mineral from pockets of [fossilized] plant matter deep in the Earth,” which is mined in Arizona. Infused with minerals, the scrub smooths and rehydrates skin while decreasing inflammation, and yet is gentle on the skin.

In addition to growing the herbs she uses in her blends, Cherissa also offers private treatments in the cottage in the garden behind her home. She uses her products in a facial which incorporates reflexology and crystal work. Her older daughter, Paris, is now working for Pablo’s Lotus, as well. “She’s my little fairy,” Cherissa says, adding that Paris went through her own trials and has also benefitted from the healing found working in the soil. Cherissa also teaches. Through her talks and seminars, she imparts the knowledge of growing and healing she has worked so hard to attain. 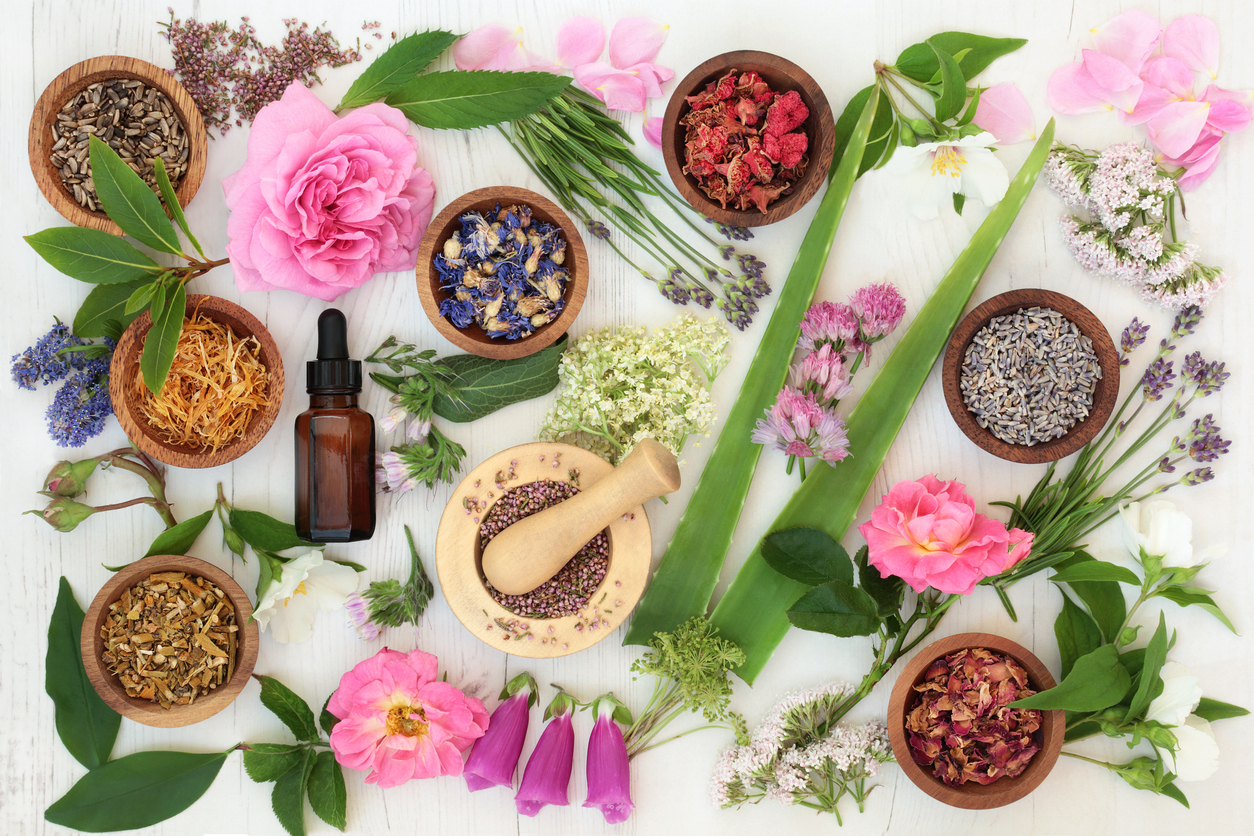 Throughout our conversation, Cherissa repeatedly emphasized how her work is not hers alone. “I am a conduit,” she says. “Pablo’s Lotus comes from the Divine.” In the dirt, on her knees, Cherissa Scott surrendered and found the inspiration to create a life which nourishes her family and clients with the healing properties of her beloved plants.