For unto whomsoever much is given, of him shall be much required.
Luke 12:48

Katrina Carpenter is a big believer in that passage from the Gospel of Luke. The owner of Carpenter’s Café & Catering has faced almost unimaginable challenges in her first year of business – a global pandemic, economic uncertainty, and civil unrest – and yet, she remains grateful for everything that has been given to her and, more importantly, is eager to give back to her community. 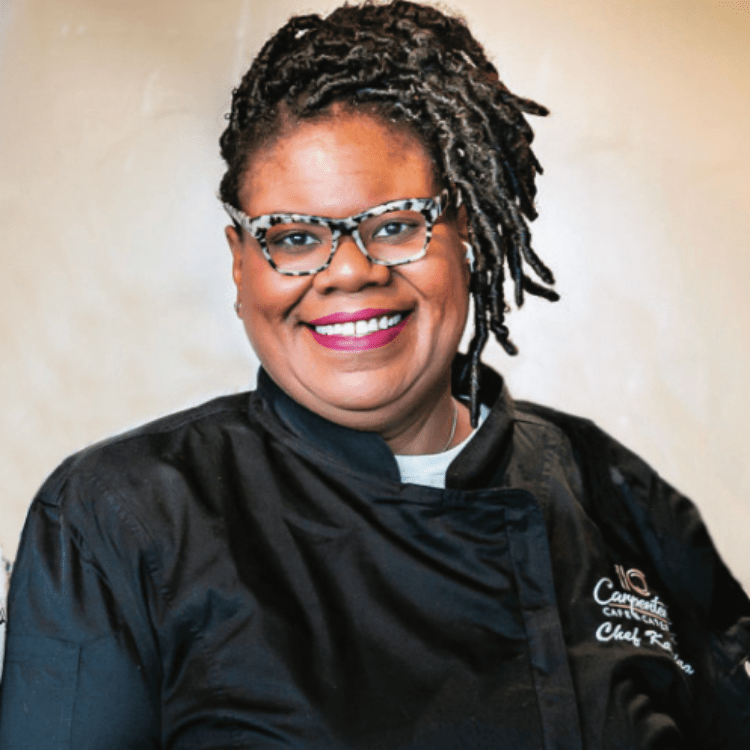 I sat down with Carpenter in her new café, located across the street from Texas Health Harris Methodist Hospital on Pennsylvania Avenue. The café is warm and welcoming, much like Carpenter herself.

Katrina Carpenter grew up on the west side of Fort Worth in a big, extended family. “I grew up in a long line of cooks,” she said. Food was and is their love language. “I’ve been in the kitchen since I was 10 or 11, so it just comes naturally.” Every time the family gets together, they cook. Every celebration, every gathering involves lots of family members in the kitchen, and Carpenter soaked up every tip and technique. She may not have a degree from a fancy culinary school, but she certainly has the skills and the heart needed to make it in the cutthroat world of food service.

After graduating from O.D. Wyatt High School, Carpenter headed south for college. She graduated from Prairie View A&M University, a historically black university that is the second oldest public institution of higher learning in the state of Texas, with a degree in Interdisciplinary Studies. “I went to college to learnto teach school,” Carpenter said as she looked around her cafe. “I never thought I would be doing THIS.”

Starting with the Fort Worth Independent School District (FWISD) as a teacher made Carpenter re-evaluate her career plan. Originally wanting to teach elementary school students, she realized that she worked better with older students. “Elementary kids are so sweet, but I couldn’t do it,” Carpenter said. “Even middle school is too much – the kids don’t have anything to lose! But high school? High school students and I just clicked.”

After four years of substituting around FWISD, the O.D. Wyatt graduate ended up teaching at crosstown rival Paul Laurence Dunbar High School, specializing in teaching students with dyslexia. Grinning broadly, Carpenter says, “I always had to explain to my Wyatt gang that I was still loyal!”

It was while teaching that people started commenting on Carpenter’s cooking. She would make her now-famous smoked chicken salad for various fundraising activities, and people quite literally ate it up.

That smoked chicken salad that everyone loves so much? It turns out that its existence is a delicious fluke. The original recipe calls for a rotisserie chicken or a roasted chicken. “I just didn’t want to bone that chicken one day,” Carpenter giggled. “We had some of Travis’ smoked chicken left over, so I used that.” The Smokey Chick, a Fort Worth classic (that’s keto-friendly!) was born. 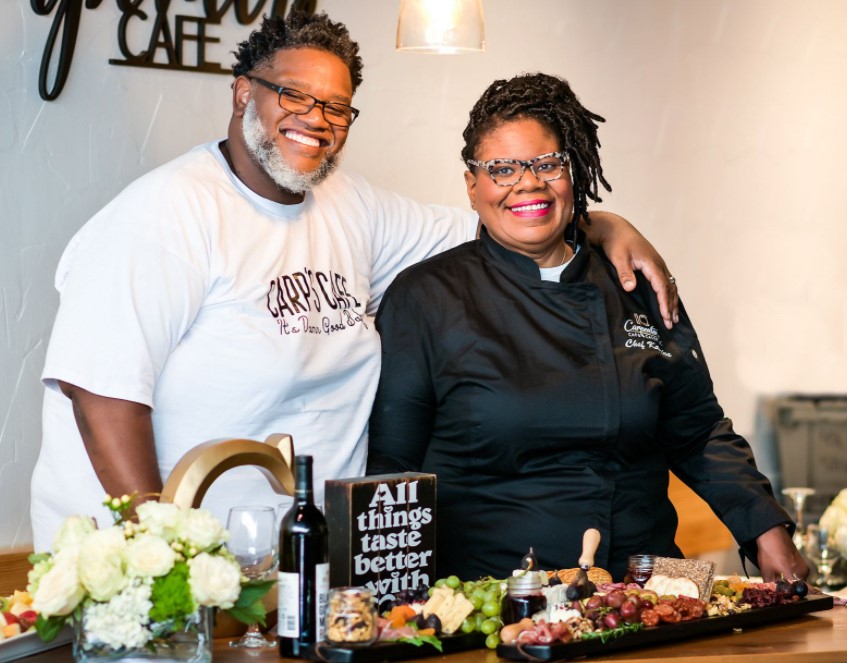 Travis is Carpenter’s husband and partner. He’s also the pit master at the café, although Carpenter is quick to point out that they are not a barbecue joint. His offerings grace the menu (in addition to smoked chicken, smoked turkey and a melt-in-your-mouth slow-smoked brisket appear in various guises) but there are sandwiches, wraps, salads, and incredible breakfasts that highlight the creativity in the kitchen, as well as the skill at the smoker.

However creative a cook she is, Carpenter never planned on owning a restaurant, but she is the first to admit that the Lord moves in mysterious ways. She was one of two sponsors for the Dunbar Class of 2019, and she provided her smoked chicken salad for every fundraising event. The calls for her to market it became deafening. So, in what she calls a “faith move,” Carpenter quit teaching and started cooking.

In July of 2019, just a few weeks after the end of the 2018-2019 school year, Carpenter was to be found in a renovated Airstream trailer in the SOMA district, sharing the space with Arcadia Coffee. She had her business plan ready. She was not going to take out bank loans to fund the restaurant she was designing. She was going to work in the Airstream for two years to build up a good cushion before moving to a brick-and-mortar location. She had crunched the numbers, and she knew this was the best way to move forward.

What’s that old axiom? “Man proposes, and God disposes?” Or is it, “Man plans, and God laughs?”

Either works in this instance.

She signed the lease.

Katrina and Travis planned on a February soft opening with a grand opening blowout in March. But remember, man plans, and God laughs. Two weeks before their planned grand opening, Fort Worth shut down. The coronavirus pandemic had thrown a big wrench into the works. 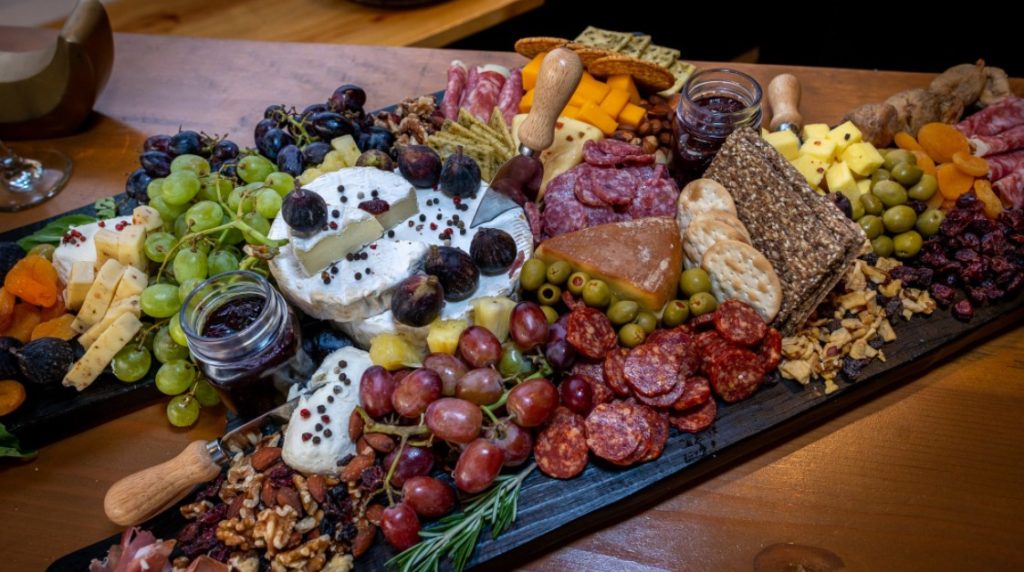 Someone with less faith and less determination might have thrown in the towel, but Carpenter admits that she’s a bit stubborn. She had left her teaching career, scrapped her two-year plan, remodeled the café’s space, all on the strength of her family’s hands, faith, and savings. (The Carpenters have not taken out any kind of loan to run the business nor do they have investors. They don’t want them.) She was not going to let a little pandemic shut her down.

But the shutdown hurt. People who had grown to love her cooking from her days in the Airstream couldn’t come in and enjoy their favorite dishes in the comfort of her carefully renovated café. “I always knew that if we started seeing scrubs in here, we’d be fine,” Carpenter said, referencing their location in the Hospital District. “Scrubs had just started trickling in when we had to shut down the dining room.”

It was just when things looked darkest that Facebook called. The café at Fort Worth’s Facebook Data Center was deemed nonessential, so Facebook was contacting local restaurants to see if they could handle catering three meals a day for 50 people, a couple of times a week. Carpenter’s Café and Catering just happened to be on the list.

“We started out making 50 meals, three times a day, twice a week. We got up to over 100 meals really fast.” Carpenter recalled. “That contract with Facebook was a lifesaver. If we didn’t have them, we would have closed.” And the employees of Facebook were appreciative of Carpenter’s efforts. “One lady stopped me on the way out after I had dropped off lunches and said, ‘So y’all are the ones putting the soul into those eggs!’ That felt so good.”

There are people who get into the restaurant business because they think they’re going to make it big. They chase the status that comes from owning a popular restaurant. They dream of having their own cooking show, a showy flagship restaurant in Las Vegas, and a line of cookware at Bed Bath & Beyond.

Carpenter is not one of those people. Her cooking is an extension of her heart. She said, “When someone takes a bite of my food, and they’re like ‘Oh my god,’ and I can see the joy on their face? That’s worth more to me than what I paid for the ingredients and labor that went into making that dish.” 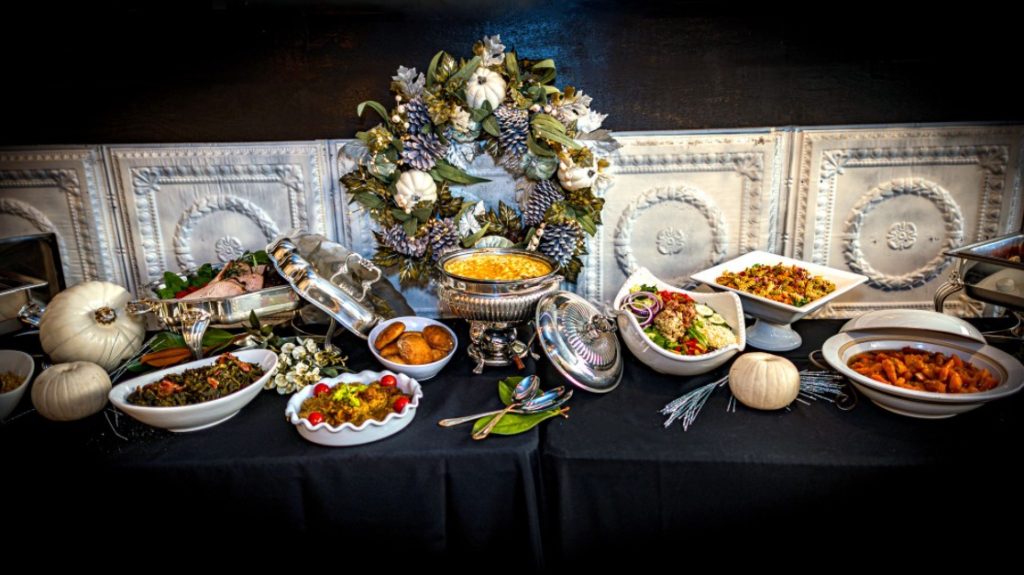 Although she is now a business owner and was a teacher, at her core, Carpenter is a mom. Her children, 12-year-old twins (“12 going on 25 is more like it!”) Joi and Brayden spent the summer working at the café. “The pandemic robbed them of their summer,” Carpenter admits. “The family spent every waking minute here, but it made us stronger. They learned about running a business right alongside me and Travis.”

Brayden runs the front of the house when he’s not doing his schoolwork for the Young Men’s Leadership Academy. He’s an extrovert, and he has become a favorite of the café’s customers. Joi, a student at Uplift Ascend Preparatory who is her mama’s mini-me, is more comfortable in the kitchen. “She watches everything I do, just like I watched my family in the kitchen.”

Carpenter is also “mom” to her employees. She admits she struggles with balancing the mom energy with her need to teach, and both with the demands of running a business. “That’s been the hardest part of transitioning from working for the District to this,” she said. “I’m having to reprogram my brain. When my employees are here, they’re mine. I want to love them and teach them.”

While she has embraced her employees, Fort Worth has embraced Carpenter. She is overwhelmed with the support the café has received from the different communities within Fort Worth. Restaurant owners have reached out to offer advice. She has catering contracts with FWISD, TCU, Texas Wesleyan, the City of Fort Worth, Crowley Independent School District, and more. And people are already reaching out to hire Carpenter’s for the holidays.

Which brings us back to the passage from Luke.

“So many people poured their support into us,” Carpenter said. “How could you sit on any blessing that you have? It was shared with me, and I know that it could help somebody else. I am going to share it because I feel like that’s how we made it.”

At the beginning of the summer, Kelly Allen Gray, Fort Worth Councilmember for District 8, reached out to Carpenter to ask if the café would cater lunches to the City’s summer reading program at Kingdom Manifesters Church. One day, Carpenter overheard a teacher asking a student why he was eating so slowly. “It just tastes so good! I want to take some home to my grandma, too.”

“I drove back to the café in tears that day,” Carpenter remembers. From that day on, Carpenter made sure there was a hot lunch every day, as well as “snack packs” that the children could take home. “I don’t know if he wanted to take food to his grandma because it tasted good, or because they didn’t have enough food, but it hit me hard.” Carpenter wasn’t being paid for the snack packs, but it means more to her to feed people than it does to make a huge profit. 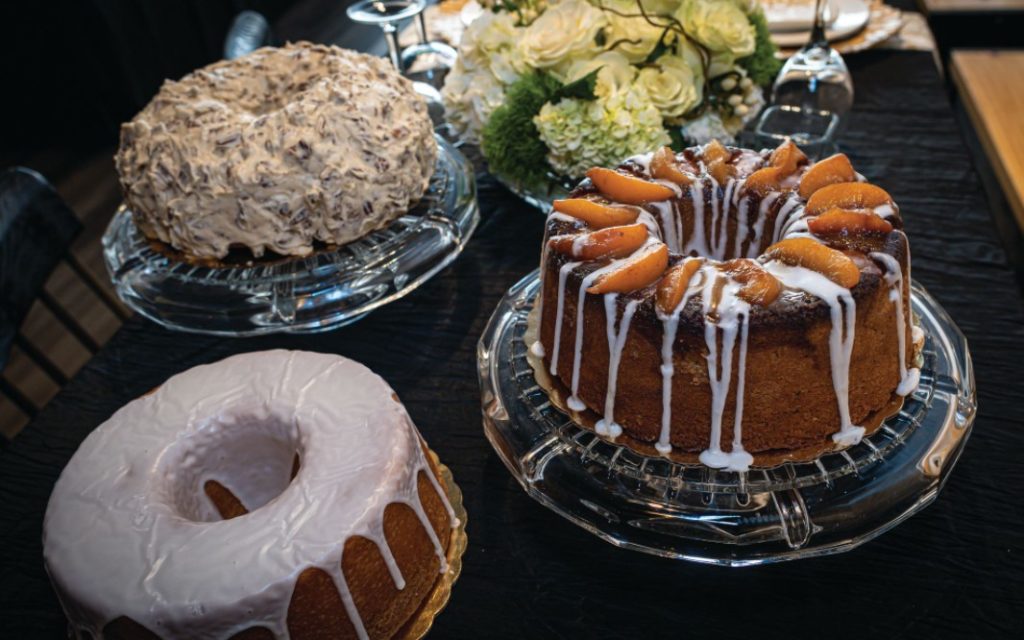 After George Floyd was killed on May 25, protests erupted across the nation. Here in Fort Worth, the protests were mostly peaceful, but the City of Fort Worth declared a state of emergency and enacted a curfew. This hit small businesses that were just beginning to get back on their feet after the mandatory shutdown in the spring. However, Carpenter looked at the protests for a way to give back.

“We were trying to figure out how to give back, being in the position we were in. So when they were going to paint ‘End Racism Now’ on Main street, we volunteered to feed the people painting. We fed all the volunteers lunch.”

When asked why a brand-new business with little capital continues to give so much, Carpenter sat up straight. “You’re supposed to share your gifts,” she said seriously. “We were given our talents to share, not to harbor them. I can cook. I can feed people. My gift is nourishing people’s bodies and souls. I’m called upon to share that.”

Make no mistake, Katrina Carpenter can COOK. She is teaching herself how to run a successful business without backers or loans in the midst of a global pandemic, economic unpredictability, and social turmoil. She is strong and smart and tough. However, what strikes you most about Katrina Carpenter when you talk to her is her gratitude and her grace. She knows she has been given much, so she feels like it is incumbent on her to share her gifts.

“We’re not rich, but we’re making it every month. That’s because of what our community has given to us. So we have to give back. We’re six months into a new business. Neither of us has a business degree. We don’t have a lot of capital – just a love of food and a love of people.”