Teaming Up for the Holidays

Cooler weather has come to campus, mums are on porches, and pumpkin spice everything is everywhere. The winter holidays are here.

Holidays generally revolve around long-established traditions and family. But what if your situation doesn’t reflect convention, or you have to work during the holidays? Therein lies the challenge TCU women’s basketball team dribbles against every holiday season, as they grind towards their goals in practice or travel to games and tournaments.

I asked Coach Raegan Pebley, in her ninth season as Head Hardwood Frog, how she and her players celebrate the holidays. “[I grew up in] a group of six children, so resources as a kid were limited.” The former University of Colorado star and inaugural WNBA draft selection said her family values togetherness, and gifting was done with small gestures. Pebley’s childhood inspired her team’s Secret-Santa tradition. Patricia Morris, TCU’s senior center, excitedly described the team’s gifting extravaganza: “We usually buy three small gifts that are given leading up to Christmas, and then one larger gift at the end.” Coach Pebley said the exchange is so popular among the players they start planning for next year as soon as Christmas is over.

Every family is eclectic in their own way, but a roster of Division I athletes competing in a popular international sport are more eclectic than most. Tara Manumaleuga, a senior shooting guard from Queensland, Australia, is unable to visit her family during Frog basketball’s longest break during the winter holidays, a whopping three consecutive days. “If I did, I’d probably be home for about 20 minutes with the time changes.” Manumaleuga has a Stateside uncle who played football for the University of Arizona, but most of her family is Down Under. She said Australians don’t have a Thanksgiving-equivalent holiday, but her Christmas back home is quite the event thanks to her extended family. “We’ll have full on basketball or volleyball tournaments at my house [where they have their own courts] or go and cookout on the beach.” (Christmas in Queensland is in the height of summer.)

For most of us, holidays are about food as well as family. Pebley had a mobile childhood. The daughter of a coach, her family moved across the country, from North Texas to St. Louis to Utah, where she played high-school basketball. (She started her head-coaching career at Utah State.) Her mom, in addition to raising six children, is a talented cook and would assign holiday cooking duties to Raegan and her siblings. “Baking was my area, and I’d most often make buckeye peanut butter chocolate balls, or sugar cookies.” Cooking with her siblings in her mother’s kitchen led to preparing meals for her athlete family. Pebley usually hosts her players for holiday meals and cooks, giving her players a little taste of home. Manumaleuga recalled last year’s dinner of Chipotle, Coach’s cranberry salsa, Pebley’s mother’s famous rolls, as well as traditional African cuisine ordered from Mama B’s International Kitchen in Grand Prairie.

When asked her holiday must-have, Morris says it’s all about the dressing (or stuffing, depending on how you identify it). Her dad’s cornbread-based recipe with celery and onions is non-negotiable for her. Growing up, Morris helped cook her family’s holiday meal as her father’s sous-chef. The WNBA hopeful’s plate typically includes turkey, ham, greens, and mac and cheese. The dessert of choice is her aunt’s incredible fruitcake. 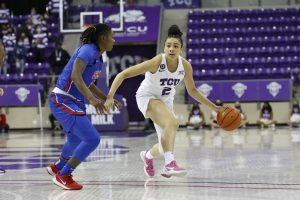 Manumaleuga’s Christmas meal has a Polynesian flair, thanks to her Samoan roots. The psychology major, who plans to continue her career back in Australia or possibly Europe, explained that pavlova, a dessert of baked meringue, whipped cream, and toppings which can include fruits or chocolate, is the food that means the holidays to her. Unfortunately, it isn’t something you see in America much.

Coach Pebley, who has children of her own, said that no matter where her family is on Christmas Eve – which can be just about anywhere – they’re going to make s’mores. Her family modifies them to their liking: graham crackers and marshmallows are the mainstays, but the Pebley kids have been known to get creative, doctoring them with peanut butter, Nutella, sprinkles… The combinations are almost endless.

Regardless of where they are, for TCU’s ladies of the court, holidays are special because of the people they are with. Family can take many forms, and it’s obvious that these women are just that, with their own traditions as they make Fort Worth their home. The rest is just dressing, so to speak.