Mckee Frazior: The Push and Pull of Interpretation. An Artist Profile

Mckee Frazior creates extraordinarily precise line drawings that depict mysterious structures or environments, tenuously anchored in space by bits of tape, straw, or string. Frazior suggests that the drawings are structures or environments and maybe neither of these things simultaneously. It’s up to the viewer to decide how each one operates.It’s true; our eyes carefully trace their way across each work’s sparse and heady details. Seemingly familiar textures and shapes help guide our gaze. Assorted cubes, arrows, points, lines, and dashes populate many of Frazior’s drawings, alongside mysterious forms that appear heavy as stone, light as paper, or as fluffy as clouds.

We imagine ourselves a quarter-inch tall, jumping from object to object in Frazior’s freewheeling, hand-drawn world. Our eyes seek stable surfaces and tangible space, but just when we think we’ve alighted upon something steady, walls fall away, the ground shifts beneath our feet, and seemingly reflective surfaces become deep portals into new dimensions. 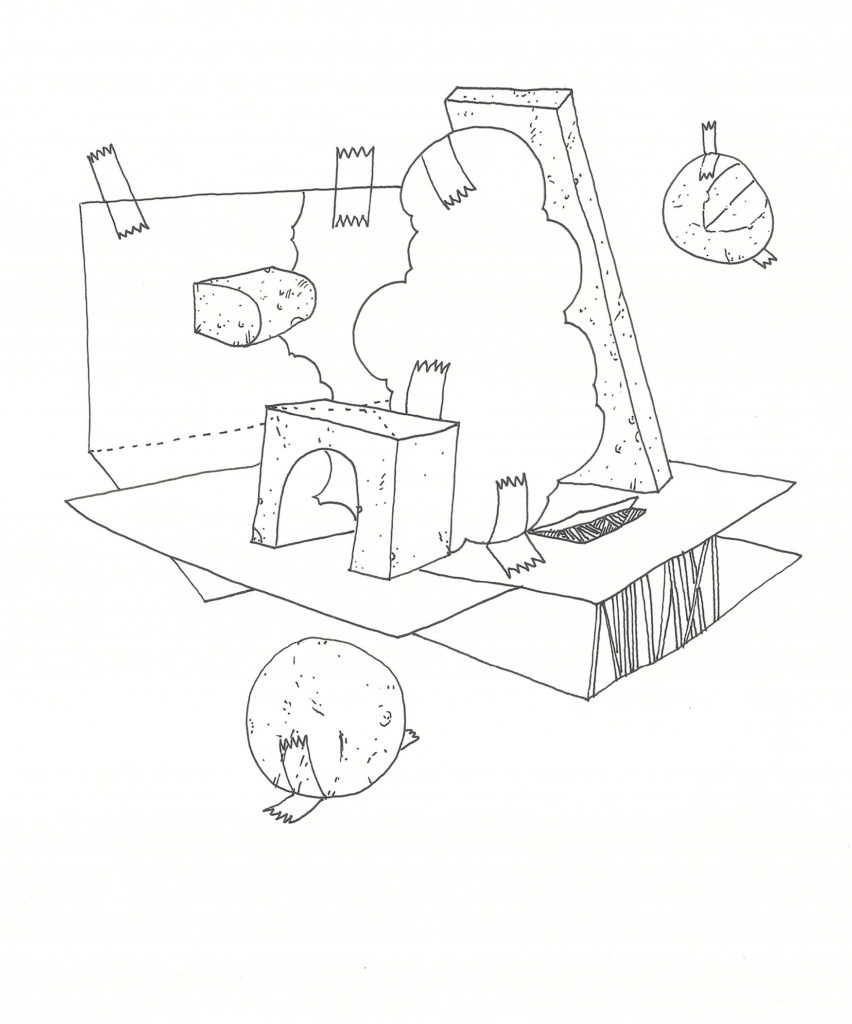 Born in Corpus Christi, Mckee Frazior has spent much of his working life in Houston and has for the past 3 years lived in Arlington, Texas, with his wife and young son. Frazior received a BFA in 2002 from the University of Texas at Austin, where he primarily studied video and printmaking. He then completed graduate work in interactive art and game development at Southern Methodist University in 2005.

Since then, Frazior’s professional focus has largely been digital interaction and game design. He spent four years working as a lead artist for Archimage in Houston, producing digital games and specializing in user interface and character and environment modeling. 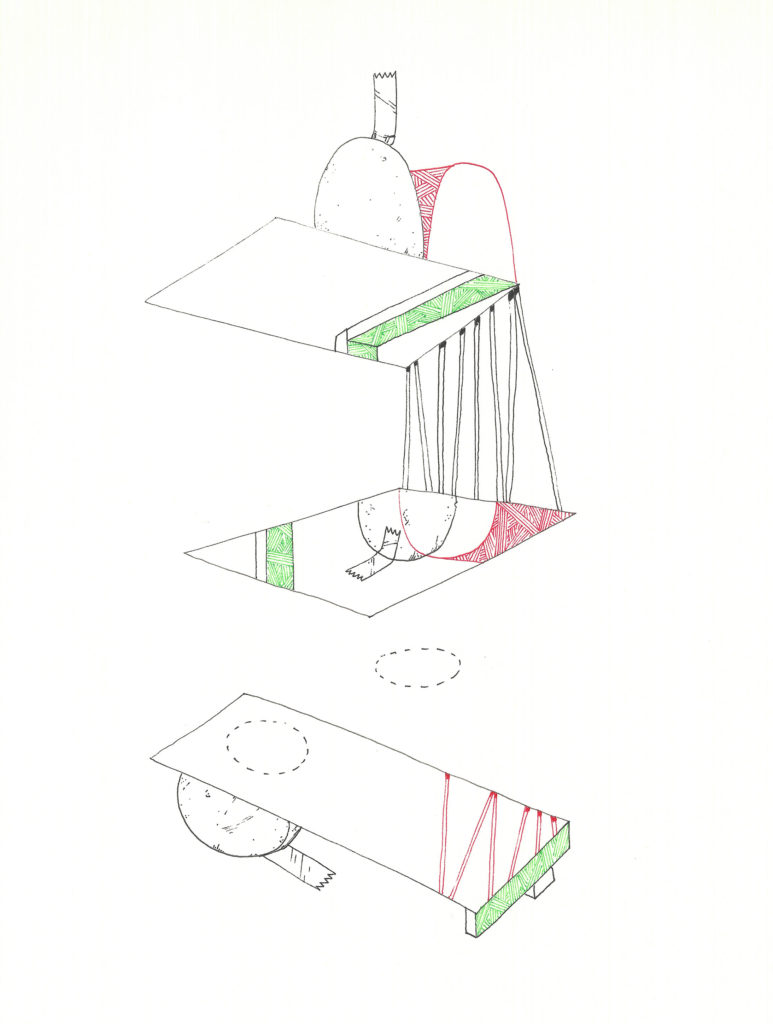 He later co-founded Bouncing Pixel, again producing games and interactive design, this time with an educational focus. Frazior now works remotely for Grammaropolis in Houston, developing games and other products that further the company’s mission to make grammar fun.

After spending over ten years working in digital media, Frazior desired a new creative outlet and returned to his own studio practice. The work began slowly in fits and starts, but eventually, Frazior landed upon drawing as a primary medium. For Frazior, producing a body of work and establishing a consistent studio practice was really about finding the right tools at the right time. 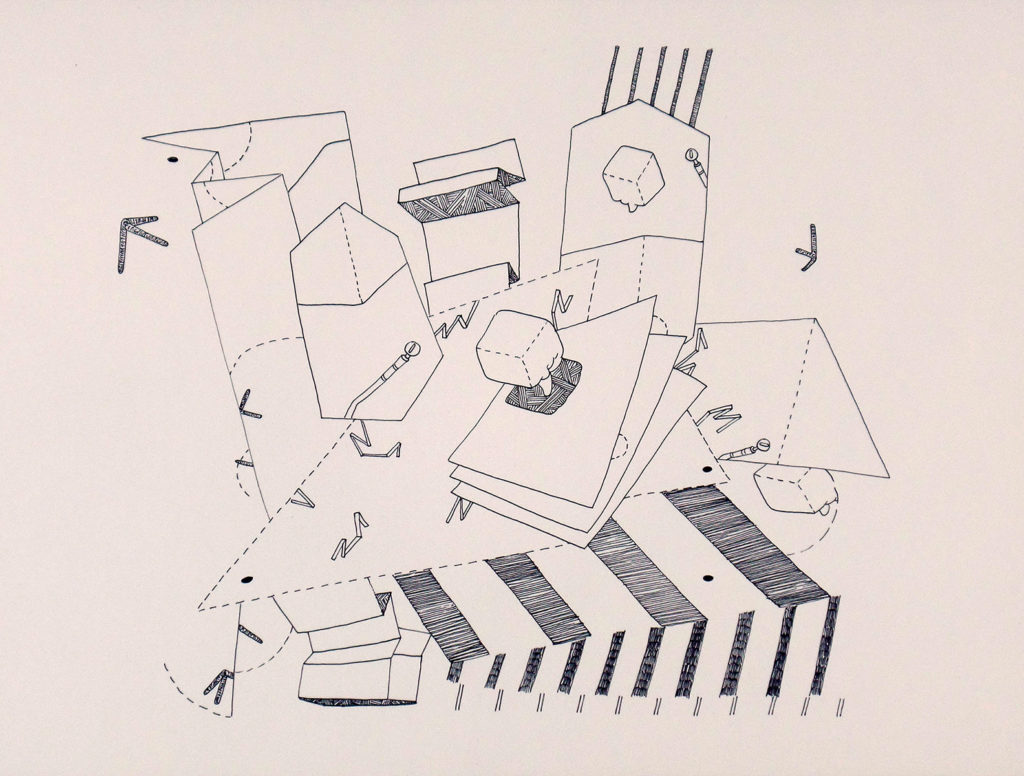 “For me, it was a fine tip ballpoint pen and some smooth sketchbook paper. That allowed me to quickly pick up and put down drawing whenever I had a bit of time or something I wanted to try. That helped make drawing a bit more of a habit, and it just grew from there.”

As an artist, Frazior is interested in exploring themes of probability and possibility in his work. Frazior knew it was important that his drawing process be somewhat automatic and not stem from particular references or source images. His drawings are made freehand without the help of preparatory sketches or under-drawing. 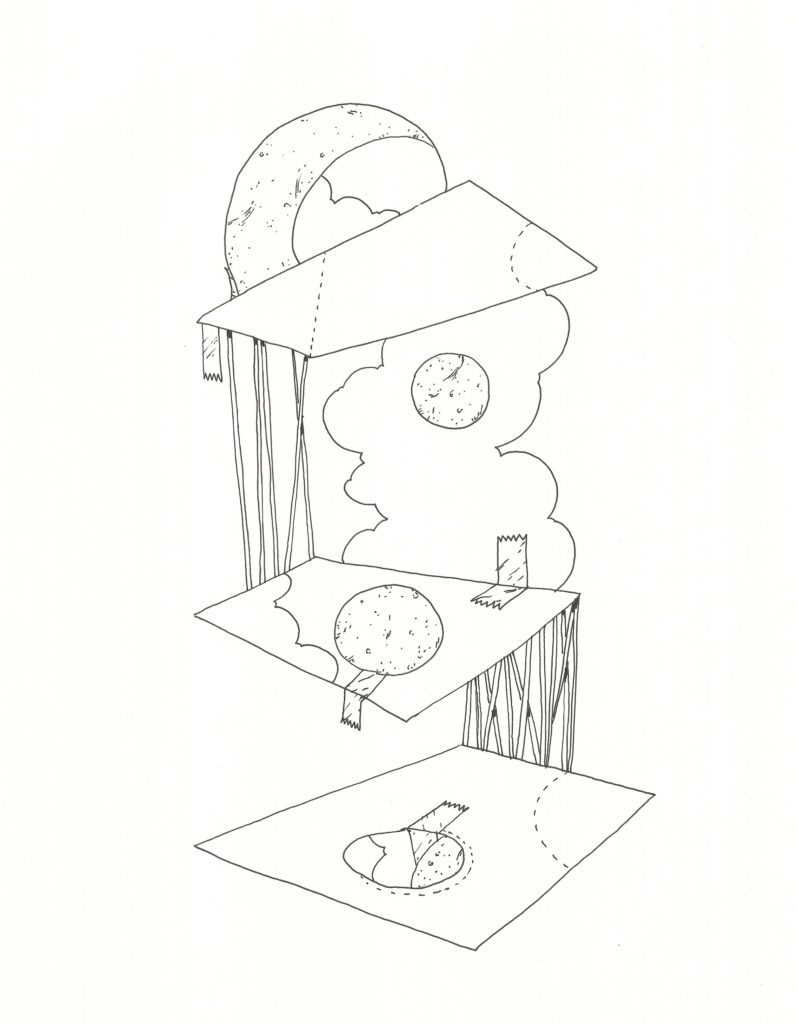 Frazior describes his additive, stream of conscious drawing process, as a means to create and solve visual problems. In the course of a single drawing, Frazior creates many rules and then proceeds to break them in order to keep the viewer guessing and constantly shift their perspective.

The finished drawings are left purposefully open-ended. They each have an interactive quality that prompts a sort of push and pull process of interpretation. The viewer is challenged to decipher what they’re seeing, and this is very much intentional. Frazior says, “I’ve always thought that’s when art becomes interesting. I mean the usual interaction you have is observing or gazing at something. I’m trying to hijack that and draw it out. I’m trying to keep your attention stuck in the piece.” 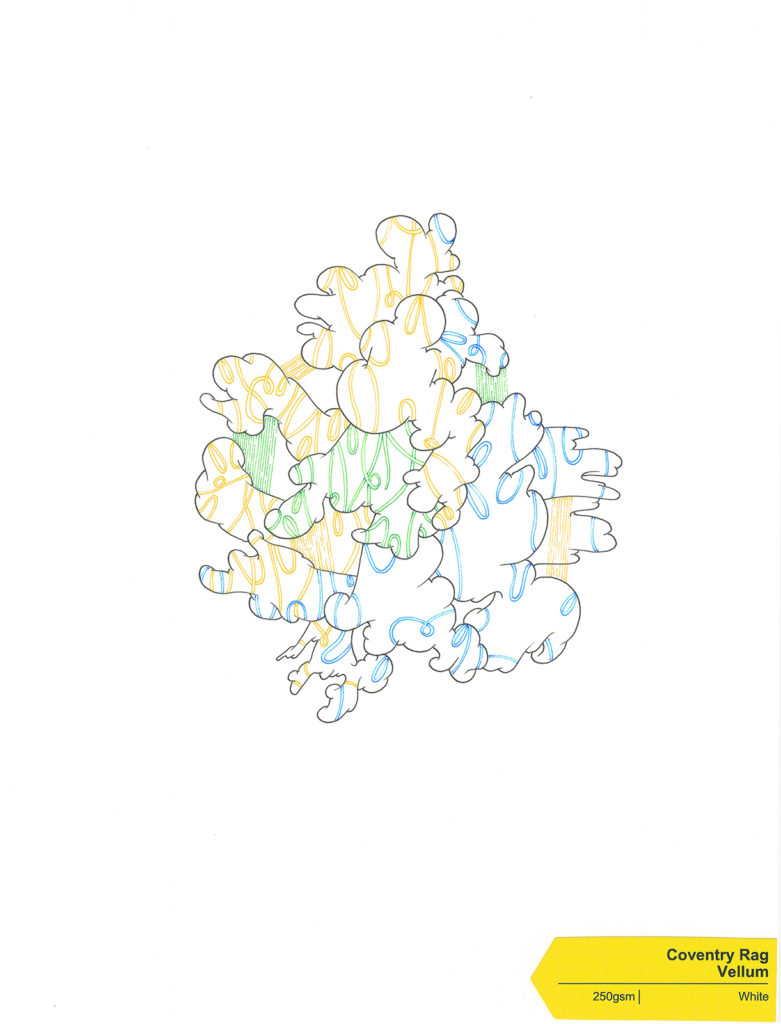 In his latest work, Frazior is upping the ante in terms of interaction. He’s now actively soliciting brief written responses to his drawings to help complete his work. Frazior began asking for feedback via Instagram and has since turned to an online crowd-sourcing forum, Amazon Mechanical Turk (MTurk), as a source.

Frazior used MTurk to pay anonymous users $1 per written response to his drawings. He’s since gathered a striking array of feedback as a result. At his upcoming solo exhibition at The Collective Brewing Project (112 St Louis Ave, Fort Worth), the artist plans to pair a few of these responses with their respective drawings as single works of art. 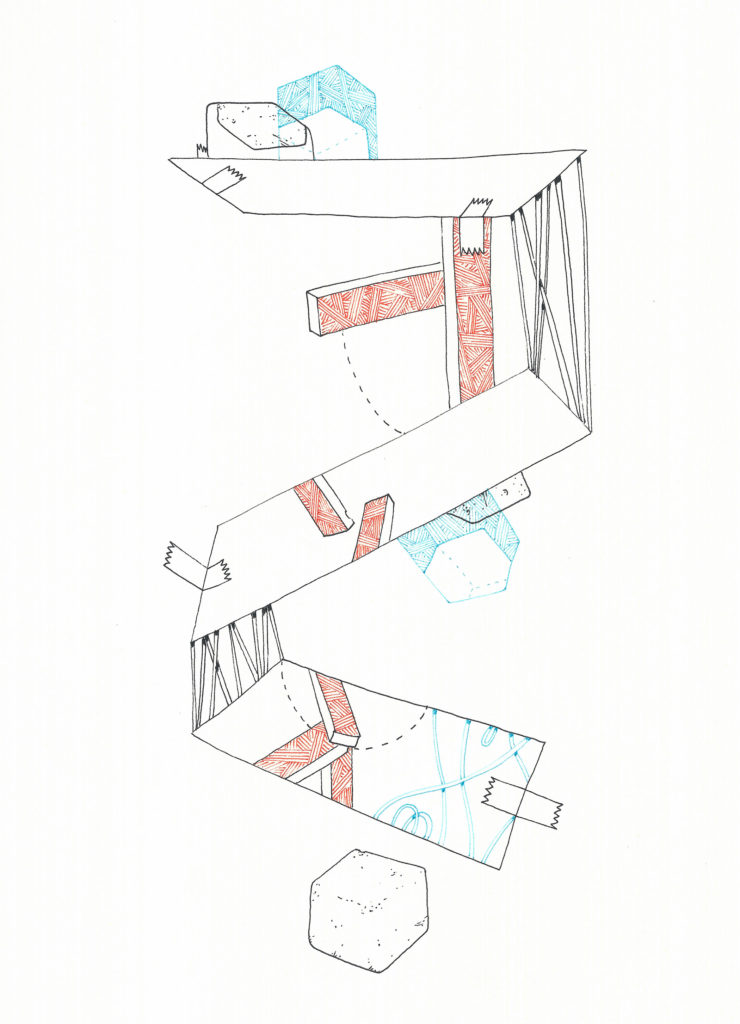 In response to the show’s unique environs, Frazior also plans to present packs of assorted drawings on coasters, almost like trading cards or game pieces. These feature many familiar elements from Frazior’s larger body of work: bits of stone, dashed lines, tape, cubes, clouds, and string. For $25, you can purchase a set and try your hand at creating your own unique arrangement of these hand-drawn elements.

Frazior presents the viewer with a finite number of hand-drawn variables, and from this rich presentation, we are free to chart a seemingly infinite number of solutions to his visual puzzle. Be they structures or environments, the probability is good, and the possibilities are endless. 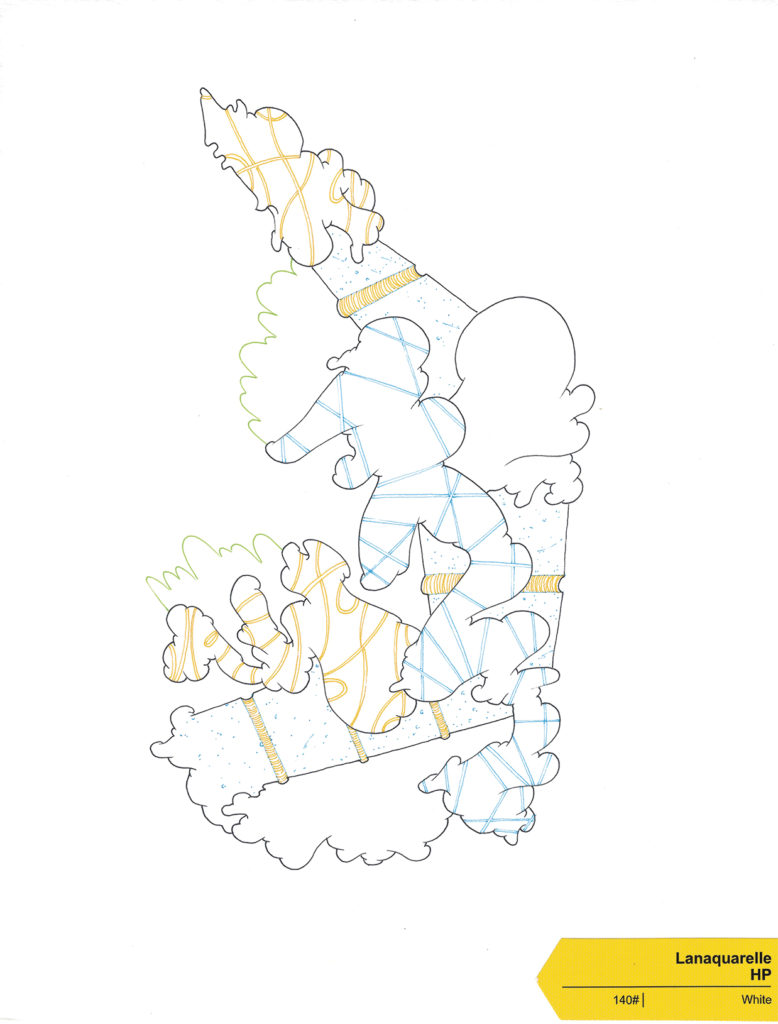 Frazior’s drawings were recently shown in Art Tooth’s Family Reunion exhibition at Fort Worth Community Arts Center. He also recently exhibited at the Latino Cultural Center and the Oak Cliff Cultural Center, as part of the second annual ART214 Juried Exhibition organized by the City of Dallas Office of Cultural Affairs.

You can see Frazior’s latest body of work in his solo exhibition at Collective Brewing Project in Fort Worth. Part of the Art + Collective series, the exhibition is curated by Art Tooth and opens Thursday, June 6, with a reception from 6–9 pm and will be on view through Monday, July 1.

This article is part of a series of artist profiles made possible through a partnership between Tanglewood Moms and the artist-led nonprofit, Art Tooth.

Auriel Garza is an art historian and museum educator currently based in Fort Worth, Texas, where she works for the Kimbell Art Museum. She has a BFA with an emphasis in art history, theory, and criticism from the School of the Art Institute of Chicago and a MA in art history from Texas Christian University. She has previously worked for museums, galleries, and cultural nonprofits in Chicago, Dallas, Houston, Miami Beach, and San Antonio. She also serves on the board of directors for Art Tooth, an artist-run non-profit that provides exhibition opportunities and resources to emerging and mid-career artists in DFW.