The Horror and the Humor: Sweeney Todd at Circle Theatre

Listen. I don’t like being scared. Ask my husband about the three-week stretch in 2005 when, after watching The Exorcism of Emily Rose, I made him sit on the toilet each morning to guard my shower-taking. Or ask my dad about the multiple chicken-outs of my childhood in line for roller-coasters at Six Flags. Haunted houses? Forget it. Carnival fun houses? Shut your mouth. 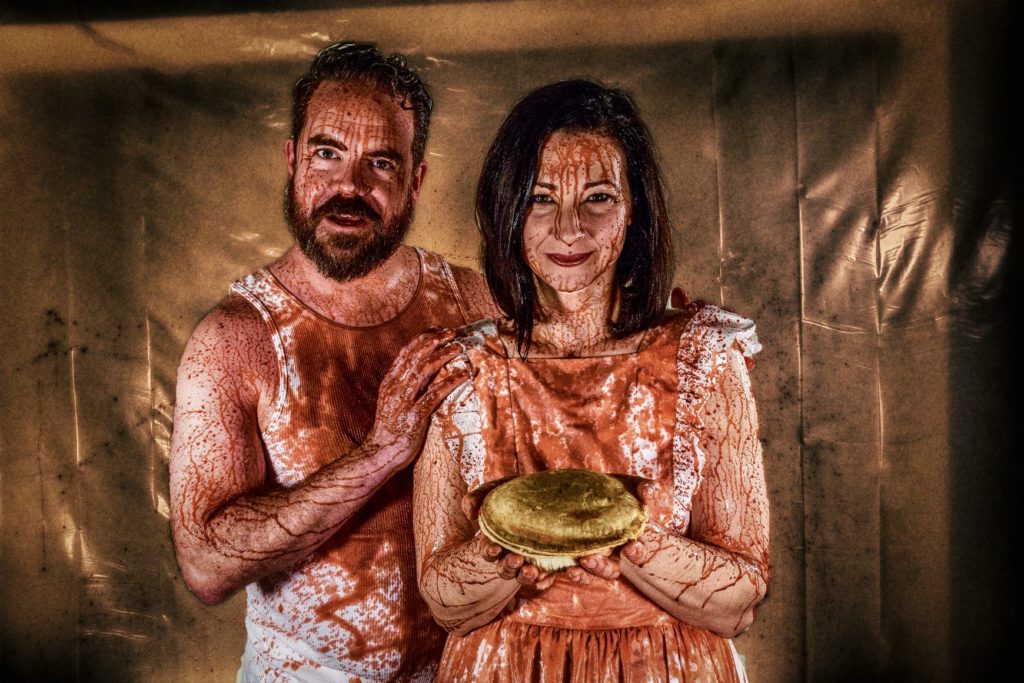 But I don’t think being “scared” is what you’re really in for in Circle Theatre’s production of Sweeney Todd, The Demon Barber of Fleet Street this summer, running through July 13th. There are those who classify this iconic Sondheim classic within the horror genre or as a “psychological thriller,” but perhaps what makes it even more of both of these things is that it is also very, very funny. And you’ll need to laugh, because you’re about to face the disturbing reality that revenge and hopelessness feel a little too familiar. You might just leave scared of yourself.

We are in 19th-century London, ostensibly, but really we’re in Gotham: a hopeless, over-crowded city that feels thick with dread. Theatre patrons descend the steep stairs in the Circle Theatre space and find themselves in a dimly lit lobby, the walls scrawled with graffiti and blown-up pictures (mug shots?) of the cast members. We took our seats in a bleak sewer-scape — trash can fire and all – the sound of water dripping. You could almost smell the urine. There appeared to be a man with a flashlight lying under a grubby tarp center stage, and I had the urge to clutch my purse. None of us was laughing yet.

Anchored by adept veteran Aimee Hurst Bozarth at the keyboard, the cast began with the famous call to “attend the tale of Sweeney Todd,” and thus began what was the most powerful element in the show: an ensemble committed as a whole to bringing every moment to life (or death, depending on the scene), whether by playing a drum in the corner or by moving a crate center stage or by holding a microphone for Sweeney as he has a psychotic break.  Of the tight eight-person cast, only Sweeney Todd (a brilliant Max Hartman) and Mrs. Lovett (Sarah Gay, delightfully dark) basically remained themselves. Everyone else became various minor characters and major characters and musicians and stage hands, all pushing the story forward to its gruesome end. It almost didn’t matter who was who in the cast, exactly; it wasn’t as much about character assignments as it was about the truth of a given moment. (This created an eerie feeling that the person seated next to you in seat 10E could just as well be on the verge of snapping themselves.)

“Sweeney” is based on the penny dreadful serial from 1846 about a bloodthirsty madman. A 1973 play by Christopher Bond fleshed out his backstory, and Steven Sondheim and Hugh Wheeler brought the musical to the masses in its 1979 Broadway debut. Here’s the premise in a nutshell: Benjamin Barker, a former London barber, has escaped prison from an unfair life-sentence. He has returned to his former neighborhood with a new name, Sweeney Todd, to take revenge on the lecherous Judge Turpin and others who had ruined his life and family. When he meets up with a desperate, creative Mrs. Lovett, a baker with whom he shares a building, a plan is hatched to use his barber business as a butcher shop and to disguise the victims in, well…pies. Yep. Kind of funny, right? 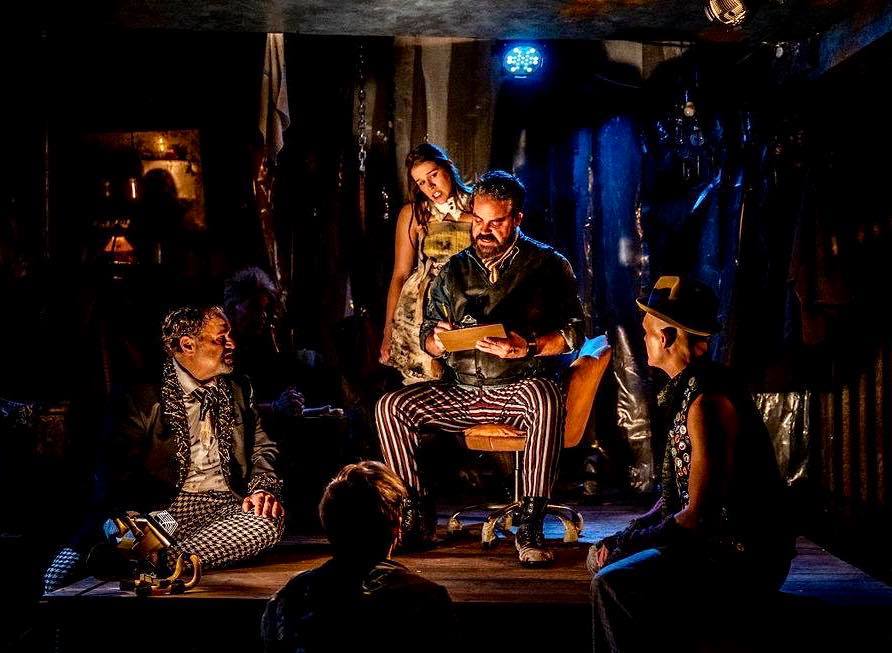 It’s hard to express how much I loved the casting of this show. Before I saw it, I was prepared to write something like, “The only thing wrong with this production is that I was not cast in it, ha-ha, wink-wink,” but LISTEN. Everyone was perfect, not just because they were great actors and singers, but because of their versatility. Mary Gilbreath Grim, playing both the Beggar Woman AND Adolfo Pirelli (usually played by a man), was hilarious and riveting. Watching her transform back and forth was great fun. I adored Randy Pearlman as Judge Turpin (if you can adore such a character), but perhaps that was also because he played a series of unsuspecting men sitting in the barber’s chair to have his throat slit over and over again. And he did it with such STYLE and differentiation. Alejandro Saucedo as Tobias Ragg, just a freshman at TCU this year, was totally, appropriately heartbreaking as Tobias Ragg. Recent TCU grad Carly Wheeler as Johanna was lovely — beautiful, really. And Ian Ferguson, serving as both the show’s music director and Anthony, was wonderfully understated playing his guitar in “Johanna,” wearing a beat-up jacket covered with faded Boy Scout merit badges. LOVE. (More on Alex B. Heika later.)

I suppose if you were in a grumpy mood when you saw the show**, you might not be up for all the creativity. I mean, this show is asking the audience to buy into a very stylized world where   you must absorb the fact that the beggar woman is now playing the French horn in the corner for a song she’s not technically a part of. Perhaps you would get distracted by the punk-goth costumes (is Mrs. Lovett’s skirt, in fact, composed entirely of neckties?) or wish for more traditional renderings of time and place (the “barber shop” is nothing more than an elevated platform framed with blood-spattered tarps). But, if you’re up for it, the cumulative effect of all this risk-taking is a big pay-off: this story could be set anywhere a person who has been deeply wounded is given the idea and opportunity to explore his worst fantasies. This show is set, really, in the basement of your psyche.

It might be unclear from what I’ve said so far about why this show is so funny. I think because we NEED the show to be funny, we are very prepared to laugh at just about every little serio-comic moment made available to us, but there’s also the famous tune “A Little Priest”, masterfully performed by Sarah Gay and Max Hartman, that leaves the audience satisfied — not in the cannibalistic sense — but comically. Alex B. Heika, playing both Beadle and Jonas Fogg, drew unexpected giggles all throughout the show. Which are, of course, the best kind of giggles.

I would encourage you to come see what all the fuss is about, and maybe leave your under-thirteen-year-olds at home. There’s some great theatre work happening in downtown Fort Worth; ironically, via Dallas theatre veteran director Joel Ferrell, whose recent departure from Dallas Theater Center leaves one hoping for a permanent move thirty minutes west.  Sweeney Todd: The Demon Barber of Fleet Street runs through July 13 at Circle Theatre. 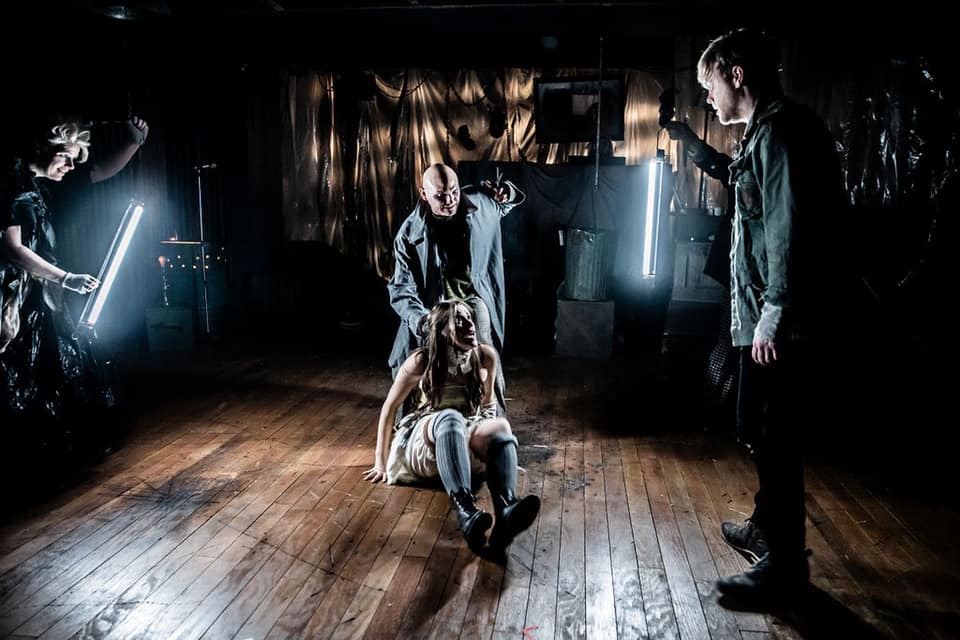 **I was NOT in a grumpy mood the night I saw “Sweeney,” and I ATE UP the dystopian environment created by the amazing Bob Lavallee, and the innovative costuming by Melissa Panzarello — especially Judge Turpin’s jabot of woven zippers, and the overall feel that we are in an unsafe, surrealist world where you can’t even trust a skirt to be what it is. The design elements created the foundational goosebumps upon which the cast built even larger goosebumps. All this wouldn’t be possible, of course, without the writing genius of Sondheim/Wheeler.

Julie Rhodes has performed on many Fort Worth stages, including Casa Manana, Circle Theatre, Amphibian Stage Productions, and Stolen Shakespeare Guild. She is mom to Drew (11) and Madeline (8), and to Eloise, the family pug. Visit juliekrhodes.com.