The first time I met Dr. Emily McLaughlin was at Zyn22, a boutique indoor spin and HIIT studio where I teach, about four years ago. She had come to the studio to get a little sweat therapy after a busy day of caring for people. 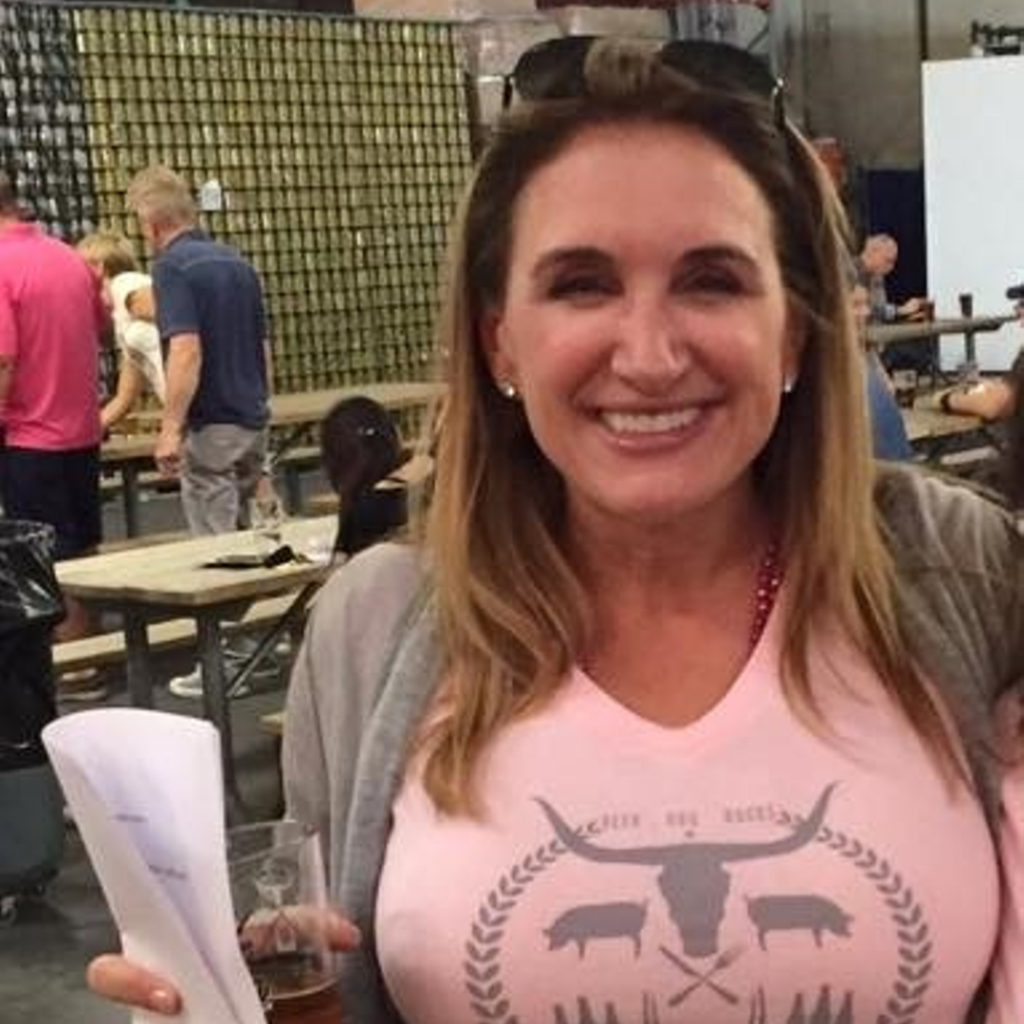 Emily, a successful Fort Worth plastic surgeon who has helped people for the past 15 years, is one of those people you feel an instant connection and wish you could spend more time getting to know. Fast forward to the next time we talked face to face. January 14, 2018. I had just had my double-mastectomy with stage 2 breast cancer, and Emily showed up on my doorstep with a bag of breast cancer survivor flare to congratulate me on getting through surgery, but most of all, to let me know I wasn’t alone and that she would help in any way she could. She had been diagnosed with breast cancer, too, in June of 2016, and had also had a double mastectomy. She and I had joined the sisterhood of over-comers, survivors, and warriors who had defeated one of the evilest diagnoses a person could ever get: cancer.

If you know Emily at all, you know she fits the quintessential definition of “moxie”. If you have moxie, you won’t let a minor setback stop you because you’re a determined person who doesn’t give up easily. This is Emily! She has taken what could have broken her and made it into something beautifully positive and fun. I was so privileged and grateful to have a moment to sit down and talk with Emily about one of her biggest passions: BoobieQue. 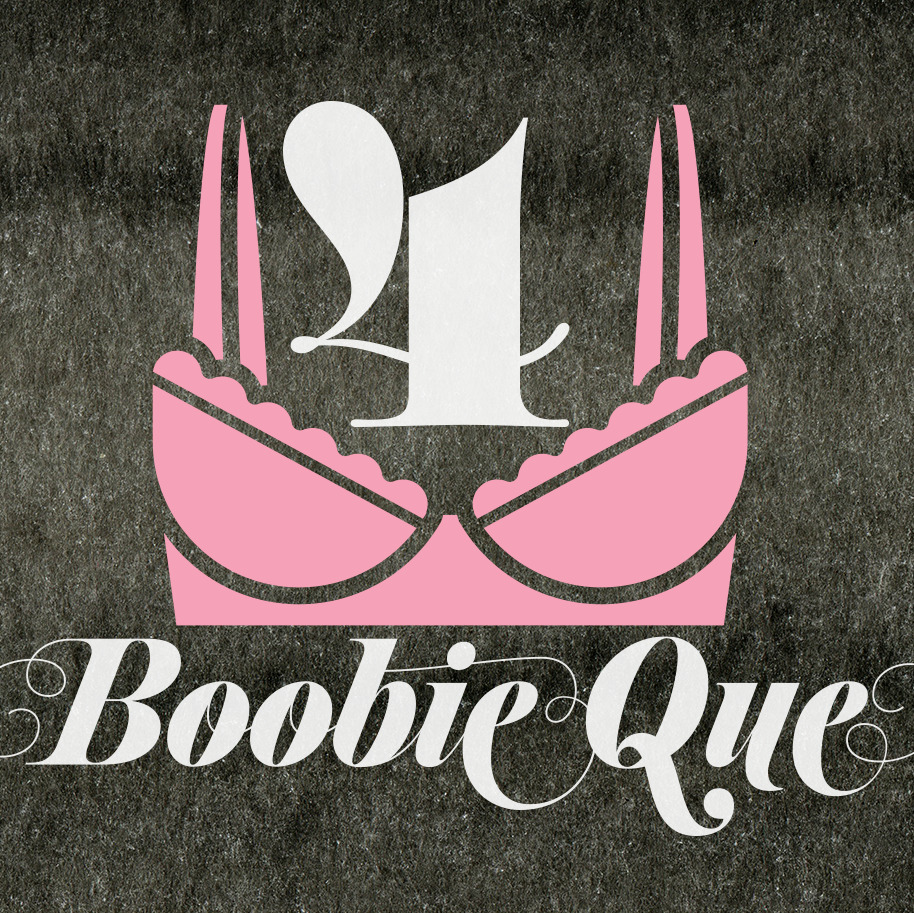 BoobieQue is an annual fundraising party, going into its 4th year on October 27th from 12-4pm, that benefits Cancer Care Services, a local non-profit organization supporting cancer patients for the past 70 years. The birth of this wonderful fundraiser has a pretty incredible story. It starts back when Emily was going into the hospital to have a double mastectomy just a few weeks after she was diagnosed with breast cancer. She had done cosmetic surgery for various things and says it didn’t faze her, but surgery for cancer scared her. Why? Because of all the unknowns going into a cancer operation. “I knew from my biopsy that it was non-invasive cancer, but you don’t know when you wake up what you’re going to hear.”

On the day of the surgery, she realized how broken the system was for patients. Being a doctor, she was used to the hospital setting and how things worked in her realm, but now she was on the other side and was gifted a whole new perspective from a patient’s point of view. She was left alone in a waiting room with no support system because her husband wasn’t allowed to come back to a procedure that had to be done before the surgery. “I kept thinking, ‘The system is all wrong.’ We keep removing the person that needs support the most, from their support. Why is that okay?”

Fortunately, Emily had a successful surgery. She found out she was a stage 0 (the best news possible) and would not to have chemotherapy or radiation treatment, but even amidst the joy from the successful surgery and wonderful news, the emotional and physical baggage of what patients deal with was still something she would have to face and work through. She wanted to find a way to change the system of how patients were cared for before surgery. “I was used to the hospital setting, but during the moments closer to surgery, I kept thinking about the person who had no medical background at all having to go through something so difficult by themselves without their support surrounding them. What other challenges faced patients going through cancer?” Emily saw a need, but at the time, she didn’t know how to help.

As a result of what she was feeling emotionally and physically, Emily chose to live very out loud with her diagnosis. “With what I do for a living, I think I would have been a hypocrite. There was no way I was going to take it quietly and not tell anyone or talk about this because it’s not my way. I remember when I came home after the biopsy, the night I was told I had breast cancer, I still had my Steri Strips on, and I took a picture and posted it on Facebook with the caption that said, ‘Well, hell.’” Almost 300 comments later, Emily knew that people were not only there to support her but that people going through the same thing had questions and needed someone to talk to. She now had a bigger platform to make a positive impact on people who were dealing with cancer because she had been there herself. 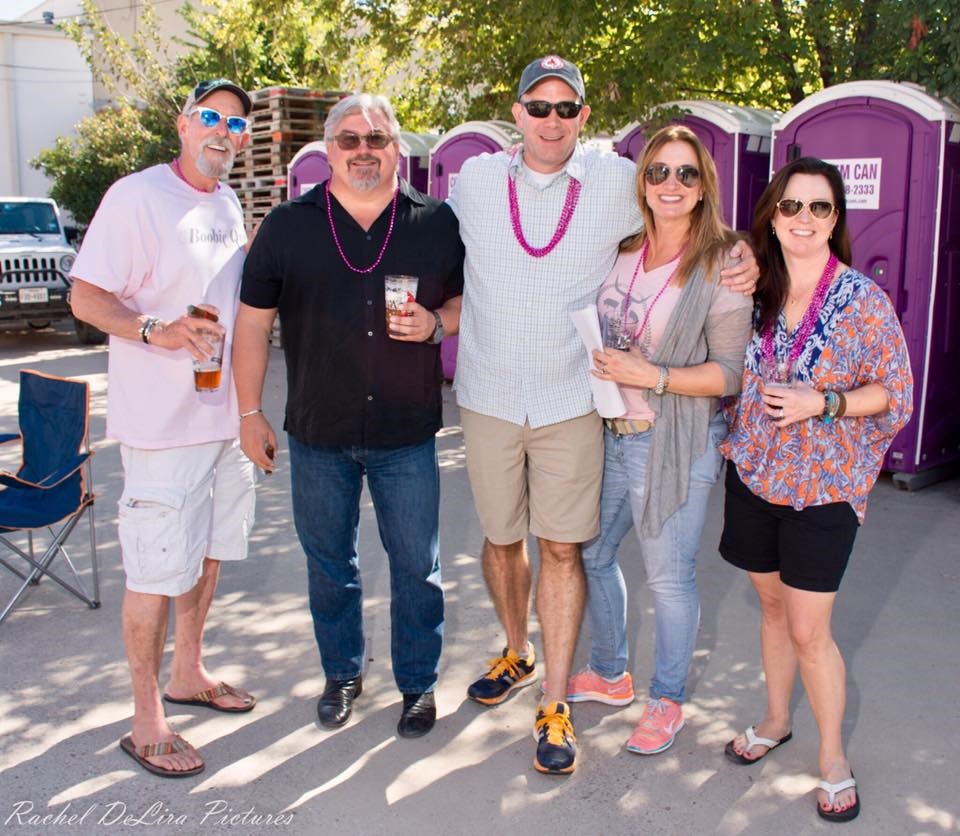 Emily shared her concerns about her hospital experience with her close friends. One of those close friends was Dr. Danielle LeBlanc, another Board-certified plastic surgeon in Fort Worth. Danielle had heard of a fundraiser called BoobieQue in other states and wondered if they could start something like it in Fort Worth. Emily thought this sounded awesome, and they started brainstorming. She reached out to friends Emma and Travis Heim of Heim Barbecue, Fritz and Erin Rahr of Rahr & Sons Brewing, Dr. LeBlanc’s husband, Matt Wallace, and close friend Carrie Carter. The Dream Team (or “Army of Magicians,” as she refers to them) was born! She says, in her typically witty way, “They had the food, the beer, and I had the boobs, so I said, ‘Let’s do this thing!’”

The first BoobieQue was born four months after Emily’s surgery, and they raised $80,000. She says, “I remember thinking: ‘You gotta be kidding me!’ We didn’t even know who we were going to give the money to because at this time it wasn’t a not-for-profit fundraiser, it was a celebration with purpose. Erin Rahr brought up Cancer Care Services, so the first year they split the money between Cancer Care Services and the National Breast Cancer Foundation, which Emily was involved with.” 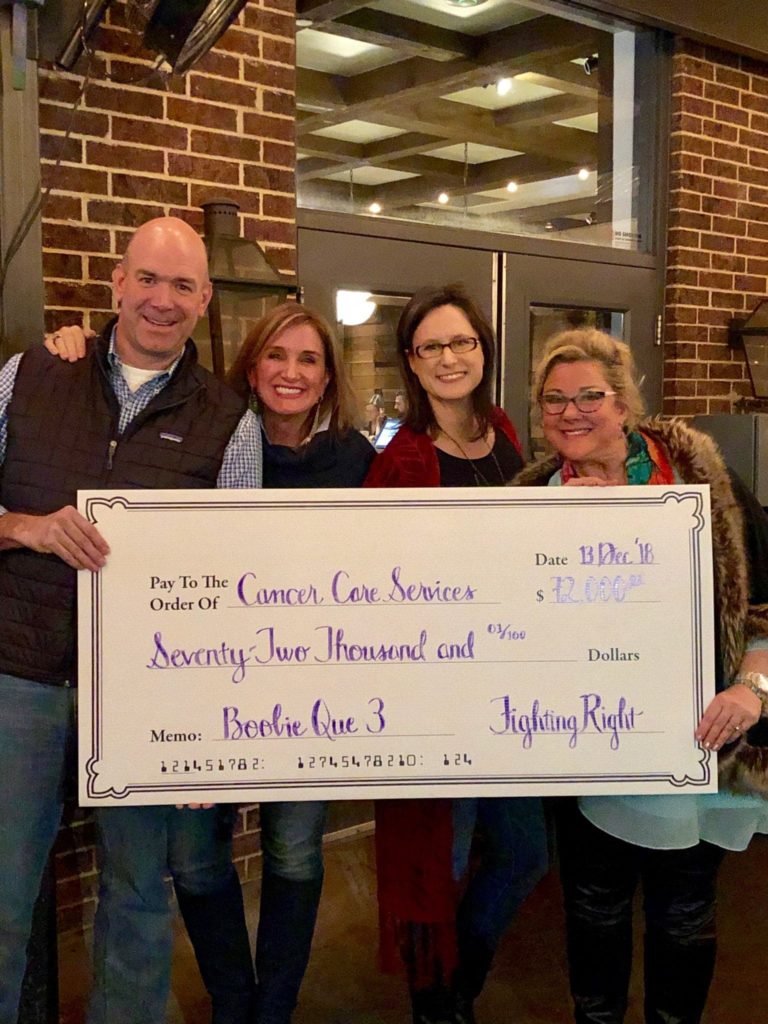 The brains behind that first BoobieQue were amazed at how much they were able to raise in just six weeks. Emily says, “If we could achieve that, who knew what more we could do? So, we organized as a non-profit. The name of the non-profit is ‘Fighting Right’ because we are fighting for a broad scope of women’s issues. We felt the world didn’t need another breast cancer non-profit. In Fort Worth, if we just represented woman’s issues across the board – education, awareness, domestic issues, breast cancer – all things together, we could help so many more people. To date, we have raised $345,000 and we’re on track to hopefully crossing the $500,000 mark this year. The reason Cancer Care Services is so important to us is because they can affect a change much quicker than we can right now, given their established status in our community. This year, we are also supporting The W.A.R.M. Place because their mission statement and what they are doing is parallel to what we are fighting for. It’s about the patients and their support throughout the journey that is cancer.”

BoobieQue has become a fun fundraiser that people are talking about! Fort Worth Magazine awarded it 2019 “Best Annual Event.” Emily’s sister, Melanie McLaughlin Austin, is the brainchild behind the logo for the event, as well as the the pint glass, which all participants receive with the purchase of their ticket. “Each year we make a different design of pint glasses. They’re sort of like collector’s cards now,” says Emily.

Emily says, “Cancer changes everything, but I am one of the few people that can say it has given more than it has taken away. What it gave me was a platform and a voice and THAT is desperately important to me. I will talk to anyone, anytime, anywhere about all of this because knowledge is power… I’m not brave, I’m just loud… Some people aren’t ready to talk about it, and that’s okay. But I think when we do, we demystify it. We struggle with the aftermath of a mastectomy and how we view ourselves, and eventually we start to heal and work through it emotionally… I don’t think I ever realized before I had cancer the massive population of people that have had cancer and have some sort of shame about it. It’s not your fault you had cancer, and there’s no right or wrong way to deal with cancer. Maybe what BoobieQue has also done is taken the mystery away. If anything that we do with this party can help in any way – make someone less scared, help cover an insurance premium, or reach out to anyone with a story that is grieving and needs help – then BoobieqQue is priceless. It is a very, very, precious thing that came from a bad thing.

“When I was 16, I knew I wanted to be a plastic surgeon. It is the best job in the world, and my career is exactly where I want it to be, which brings me the greatest joy in the world. The joy I feel is paralleled or exceeded by the non-profit world because writing a big check for money that was donated by the generosity of this community to give away, brings such joy and I am just giddy about it!”

Emily and her Army of Magicians are dedicated and work so hard to make this event the best and most successful it can possibly be. She says, “We all have full-time jobs outside of this, and the event is hard work, but this is the greatest tired you could ever imagine. At the end of the day, I just want to hear that it’s the best party you have ever been to and will never want to miss it.” 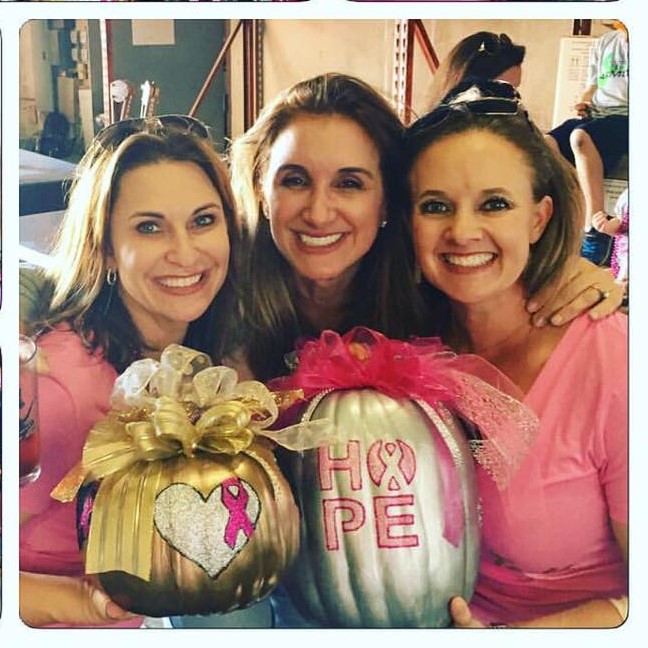 I, for one, will definitely be making my way to BoobieQue this year! I hope you will join me in celebrating our opportunity to make a difference in so many lives.

For tickets or more information for this event, click here . Also, the Texas Health Resources Mobile Mammography Unit will be present at BoobieQue offering screening mammograms for qualified women who have confirmed appointments in advance. Call 1-855-318-7696 to make your appointment; appointments can be made Monday through Friday, 8am to 4:30pm. Bring your insurance card and driver’s license or state ID to your appointment.

Women with completed mammograms on site will be granted free admission to BoobieQue with proof of exam.

Jennifer Kieta is a native Texan, born and raised in Houston. She graduated from Texas Tech University and has lived in Fort Worth since 1996. After marrying her husband, Brian in 1998, Jennifer worked as a Child Life Specialist at Cook Children’s Medical Center for 9 years before becoming a full-time mom to her two daughters. Her passion for helping people in healthcare transitioned into the fitness world in 2014. She now teaches spin and HIIT classes at Zyn22 and Pilates at Studio 180 in Pop’s Gym. December of 2017, Jennifer was diagnosed with breast cancer. Her journey through a double-mastectomy and being able to call herself a Survivor and Overcomer has allowed her to have an even greater passion for helping people embrace every day and take care of themselves one day at a time.