by William Wise / March 1, 2018
Fort Worth Arts, Fort Worth Culture

On March 24th, in collaboration with Regan Hall Art, Madeworthy magazine and Tanglewood Moms will be hosting our first ever art show. Art Hunt will take place in beautiful, lively West Bend and will showcase nine extremely talented artists. Along with works by the artists listed above, Art Hunt is proud to include landscapes by Trish Wise, paintings and portraits by Jana Renee, and photographs by Regan Hall. 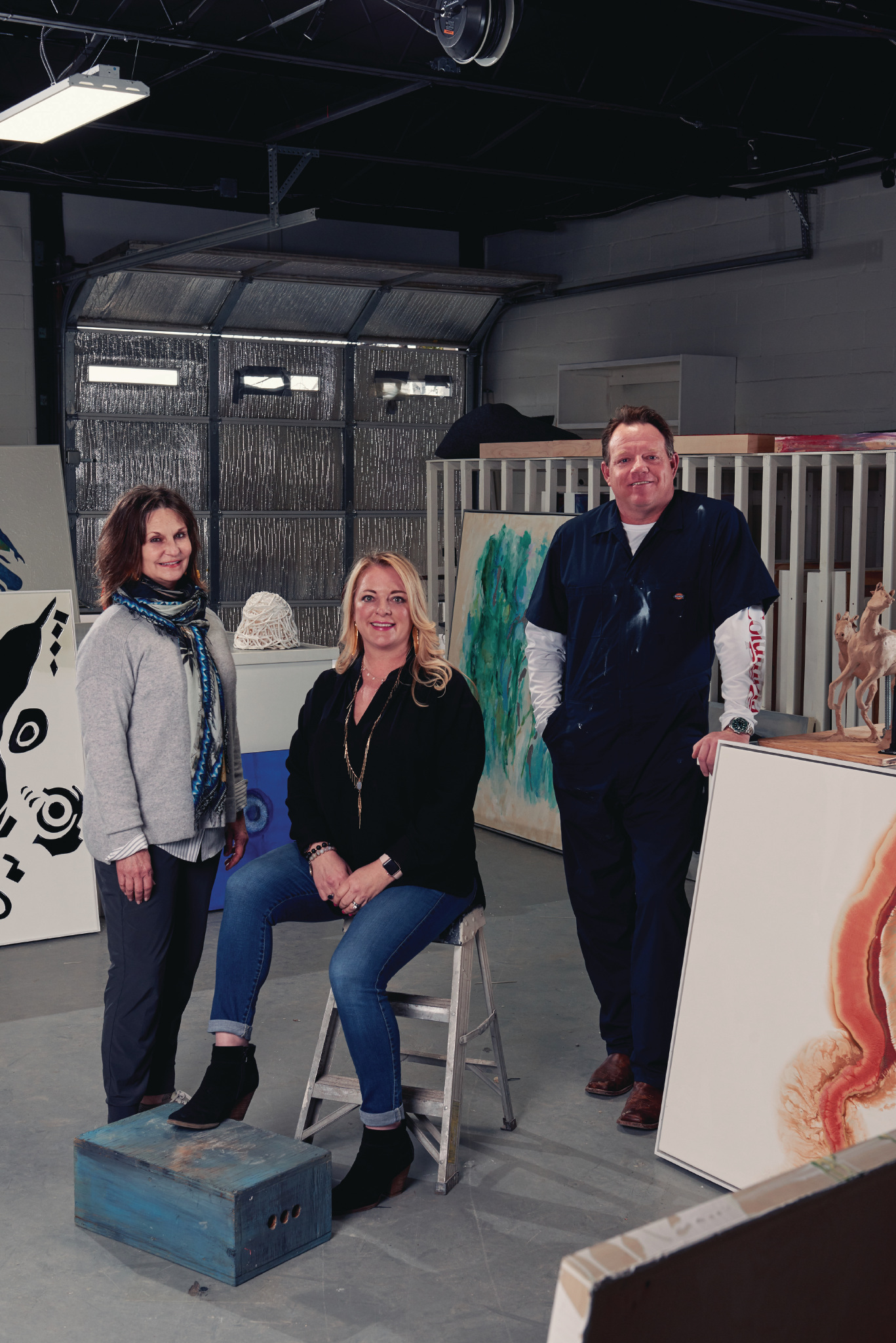 Having spent years working and creating in their homes, artists Pat Green (yes, that Pat Green), Ginger Walker, and Cheryl Hodge decided what they all really needed was a space of their own to collaborate, create, and show their works. The three friends have partnered to open a new working gallery on Vickery. The gallery, called Galleywinter Galleries, is scheduled to open in March and will serve as a studio for the three artists-in-residence and a gallery for their, and other artists’, works.

Like many artists known mostly for one type of art, Texas music legend Pat Green is impressively multi-talented. Green is energetic, lively, and gregarious. He’s also thoughtful, intelligent, and passionate about his work. A painter and a sculptor, Green came to the visual arts later in life, having created a successful career as a singer, songwriter, and performer. The same creative impulse that drives Green’s music has evolved into a love of creating visual art as well. Having studied and worked with renown sculptor Gil Bruvel, Green has embraced sculpture as a discipline that allows him to express himself in a new and meaningful way. “I spend more time sculpting than painting”, says Green. “I have a picture in my mind of what I want to do. For the last twenty years my job has been to express my emotions [in music]. With sculpting, I can make anything I want, and I can translate the emotions right out of my head into the metal.” Green paints his sculpted metal works and the results are a delightful and moving combination of beauty and elusive emotion. Green’s reputation as a fun-loving musician is accurate, to a degree. He has evolved over the years. The fact he is also a serious artist driven to pursue excellence in his various chosen disciplines cannot be over-stated. He takes his work very seriously, and then he has lots of fun with it.

Dallas native Ginger Walker’s painting style is bright and bold, yet soft and ethereal. It is like a dream you can’t quite remember, but from which you awoke with a smile. “Color is my love language,” says Walker. One look at her work, and the truth of that statement is obvious. Her paintings are lively, fluid, bright, and evocative. They are brilliant sunshine and fresh air. Working mostly in acrylic or acrylic and ink, Walker, married with two children and two dogs, likes to work fast to fit her passion for her art into her hectic schedule. Walker says she hates grey days and feels inspired on bright, sunny ones. Her personality is full of light and fun, so it comes as no surprise her paintings reflect that as well. They are a welcome addition on those dark, rainy days when the sun hides his face.

Cheryl Hodge is a painter and sculptor whose abstract paintings tend toward the monochromatic yet express an inviting intelligence and depth. Not a one-trick pony, her extruded plastic sculptures are vibrant, eye-catching, and fun. In fact, her art is truly a reflection of the artist. Hodge admits her closet “looks like a black and white photo,” but her personality is anything but boring. She is as vibrant as her sculptures, and, like them, Hodge puts a smile on your face. At the same time, she is as warm and deeply intelligent as one of her paintings. Her multi-faceted and unique personality comes across so clearly in her art that owning a Cheryl Hodge feels a bit like getting to take her home with you. 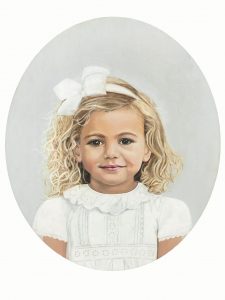 After attending TCU, Fort Worth native Natalie Erwin moved to New York City where she worked for and showed at Sotheby’s auction house. While she enjoyed her time away, the city itself was a distraction from her true love of painting. After a couple of years, Erwin packed her bags and moved closer to home. Dallas’ vibrant art community and gallery scene provided Erwin with a similar “big city” backdrop while allowing her to focus on her work. As it turns out, that was a very good move. Erwin was quickly picked up by several galleries, and her art began to thrive. Erwin’s body of work encompasses a variety of themes and demonstrates a broad breadth of interests, a reflection of an innate curiosity that she bravely follows. From trees and cattle to bank notes and birds, Erwin allows her curiosity to drive her imagination. The results are masterful translations of subtle gesture within captured moments. Erwin has recently delved into the world of portraiture with aplomb. Having sought a portrait artist for her daughter without success, Erwin eventually decided to just do it herself. Pleased with the results, Erwin offered her services initially to friends and family. Her portraits quickly praise, commissions skyrocketed, and she is continually in demand. Working exclusively with natural paints on expertly crafted birch panels, Erwin has developed a unique style that is instantly recognizable and possesses a timeless quality that speaks at once of old masters and novel techniques. 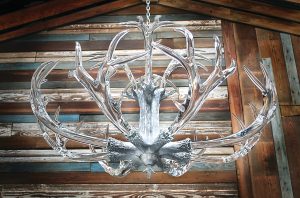 While in college, Jason Lawson saw a glassblowing demonstration by a young craftsman, and he knew immediately that he wanted to be a glass artist. Having earned his credentials doing production glasswork in a studio in Wimberley, Texas, during his college days, Jason has gone on to make a name for himself in the decorative arts. He has worked with dozens of designers, art consultants, and collectors. He did not know it at the time, but when a client asked Jason if he could make an antler chandelier, his future opened before him. Eight months later, Jason delivered a jaw-dropping sculpture of glass and metal that captures the imagination and defies pre-conceived notions of what a chandelier out to be. Over the years, Lawson has refined and perfected his process. “It took a while before I thought, ‘Man, that really is the drawing I made!’ I finally understood every little nuance that makes the chandeliers sing, and that really has been the most satisfying thing as an artist.” When you see a Lawson Crystal Antler Chandelier. two things come to mind: “How did he do that?” and “Where do I get one?”. With hand-sculpted bronze, nickel, or 24-carat gold armatures, each of the stunning LED-lit glass chandeliers created in the Lawson studio in Fischer, Texas, is a signed and numbered one-of-a-kind masterpiece of artistry and craftsmanship. 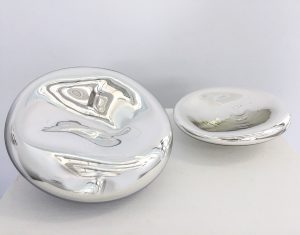 Austin Fields has been an artist since childhood. In school, she worked with every medium she could get her hands on, exploring as much of the what the art world had to offer as she could. From painting to ceramics, Fields always sought to challenge herself to grow as a multi-discipline artist. Until, that is, she discovered glass. “I first took glass-blowing at UTA to fulfill my studio art credit, and I fell in love with it. I thought, this is for me! I finally found a medium that I can really emotionally connect with. It is the most beautiful and challenging material I have ever worked with, and the possibilities are totally endless.” Some of Fields’ most moving pieces are sculptures that she performs what she calls a “mirrorizing” technique, applying a reflective solution inside the blown glass vessels, that is beautiful and engaging. “I enjoy creating work that is interactive in a sense. The reflective work is an optical device that captures the viewer and their surroundings, and it forces them to engage with the material because it creates a distorted perception of themselves being reflected back.” 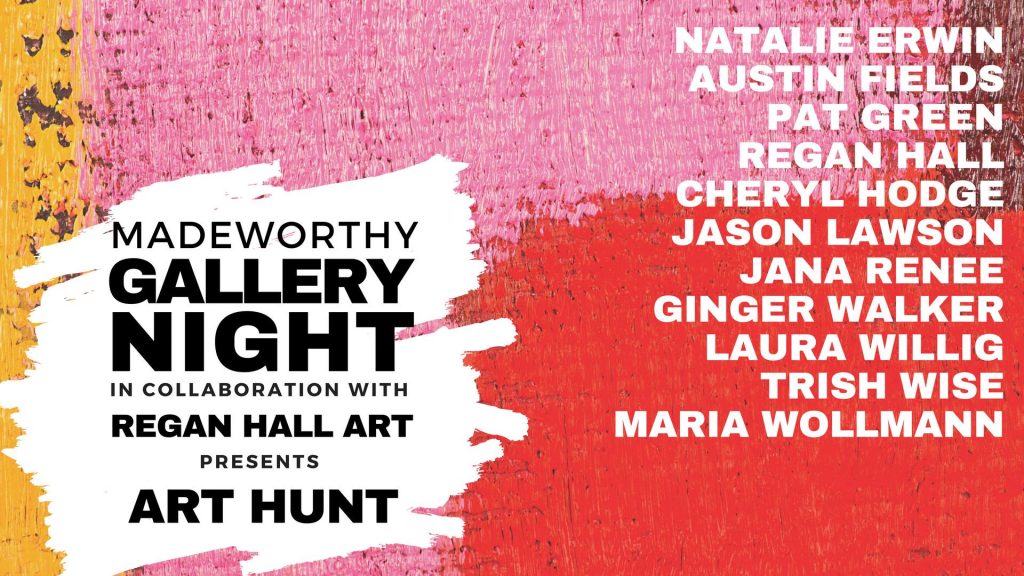 This article originally appeared in the March/April issue of Madeworthy magazine.