Lessons from a Life of Coaching

Sixteen years ago, I accompanied a colleague to race motorcycles with his jiujitsu instructor at Cresson’s Motorsport Ranch. While changing into our leather crash suits, I couldn’t help but notice the physical impressiveness of Travis, our soft-spoken but broad-backed host. After our track session, we went to a local bar to watch the premier of the fourth season of The Ultimate Fighter, which Travis had recently competed in. Little did we know that afternoon, but Travis had already won that competition and was on the cusp of competing for an Ultimate Fighting Championship (UFC) title.

Travis Lutter doesn’t fight professionally anymore, but his eponymous gym is as dynamic as ever, and he can teach all of us a thing or two about how to roll on the mat. 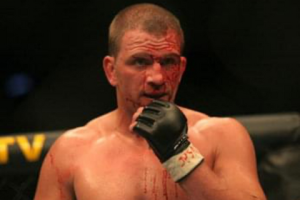 In their 25th year of operation, Travis Lutter Brazilian Jiu-Jitsu [sic] is on Camp Bowie, just east of the Benbrook traffic circle and Cowtown Farmers Market. The gym, which has a membership close to 300 members, offers an array of combat-based classes including muay thai kickboxing, wrestling, boxing, and mixed martial arts, in addition to various classes for kids. Lutter, a former college wrestler transplanted from South Dakota to North Texas, has been coaching fighters for more than half his life.

Ultimate fighting and the practice of jiujitsu have been linked for Americans since the sport’s inception in 1993. “At the time there were two gyms [for ultimate fighting training] – one in Los Angeles, and one in New York…” A derivative of the more traditional Japanese martial art of judo, modern jiujitsu was developed in Brazil when a touring judo master from Japan introduced the art to the five Gracie brothers in 1917. The Gracie family then modified judo and marketed it as a self-defense style. One of their descendants, Rorion Gracie, co-founded the UFC, and one of his brothers, Royce Gracie, won three of the first four UFC championships. 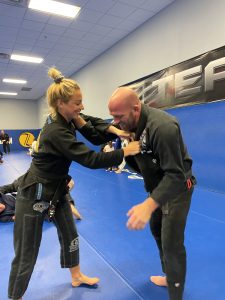 Lutter initially learned Brazilian jiu-jitsu (BJJ) – a more common name for the Gracies’ method – through instructional VHS tapes and sparring with his college wrestling teammates. Jiujitsu and wrestling are naturally complementary since both see practitioners working from the ground to hold and control an opponent using the opponent’s own force.

“It’s mostly based on disarming,” said Lutter when describing the origins of jiujitsu and judo. Both were invented after the feudal samurai system in Japan was disbanded and traditional weapons-based training was outlawed by the government. “The primary difference between jiujitsu and judo is [jiujitsu practitioners] kind of forgot about ‘the rules.’ If it works, we’re going to do it; if it doesn’t, we won’t.”

Lutter was intrigued with BJJ because he saw smaller fighters have the advantage over larger opponents. “I had to learn this,” he said.

While in college, Lutter was presented with the opportunity to participate in a national college exchange program, moving to Denton to attend the University of North Texas (UNT) while receiving credit at his home institution. While at UNT, he started training with Carlos Machado, a cousin of the Gracie family and a BJJ grand master.

Machado may not be well known, but he was Chuck Norris’s primary jiujitsu instructor after the two met in Los Angeles in the mid-90’s. Machado moved to Dallas where he coached while assisting with fight choreography for Walker, Texas Ranger, as well as appearing in several episodes. “It was the best thing I ever did for myself,” Lutter said of moving to Texas and learning from Machado. 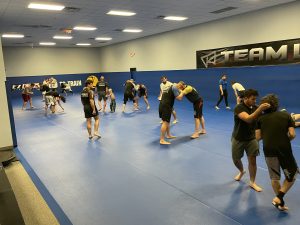 Lutter, who still coaches most classes himself, spends half a class teaching a new skill or technique, then allowing students to practice with each other situationally. His average student is in their 30s and is looking for variety and challenge, but the community is what keeps them coming back. “I have everywhere from five-year-old members to my oldest student, who is 73.” Lutter’s first client, almost 25 years later, still trains weekly.

Lutter, who doesn’t coach but will demonstrate for the kids’ classes, said most martial arts gyms are child-focused; however, his membership tends to be predominantly adults. He says he prefers coaching adults because he values being honest and forthright about where they can improve without pulling punches. “Sometimes people aren’t honest with themselves. I’m going to be.” When asked what a new member should expect after training with him for six months, Lutter was on brand with his frankness. “You’re going to be able to win a fight and be able to kick you-from-six-months-ago’s ass.”