The F-35 of Razors: Patrick Coddou and the Single Edge

There are ancient cave paintings, some dating back as far as 30,000 years, that clearly depict beardless men. This begs the question, “How did these men become beardless?” Hair removal at the time was achieved in one of two ways. One could use clam shells like tweezers and pluck the hairs from the face. No thanks. Alternately, one could simply, though perhaps more dangerously, drag a piece of sharp flint across the face, thus cutting the hair. Again, no thanks. These two techniques seem to have been the only depilatory methods employed by men for thousands of years. 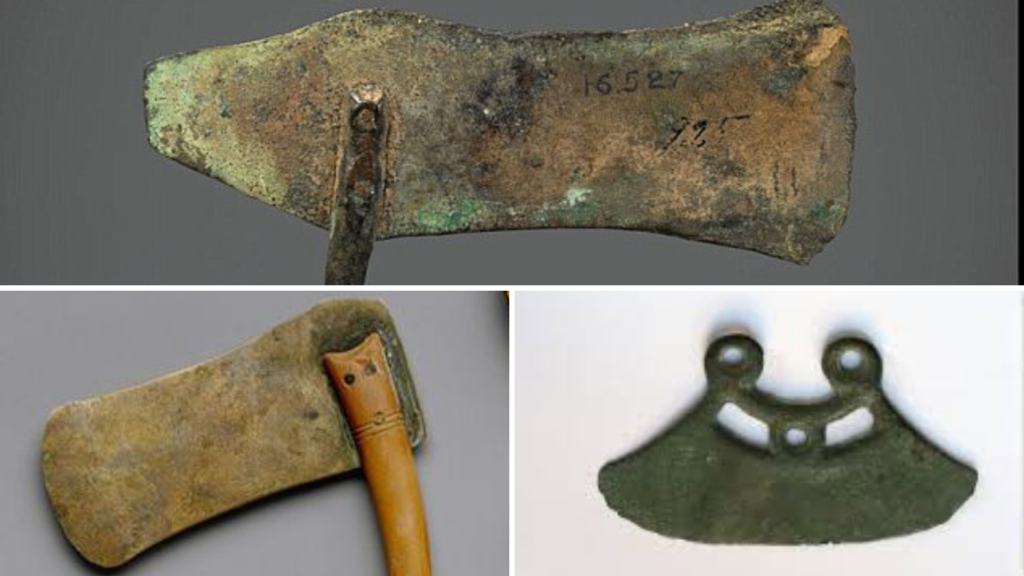 From Ireland to Siberia, razors have been unearthed in Bronze Age excavations, and solid copper and gold examples have been discovered in Egyptian archeological digs. The ancient Greeks prized their beards as a symbol of manhood, and therefore had little use for razors. However, by the 5th century B.C., razors were in fairly common use among the Romans. The first “modern” straight razor was developed in Sheffield, England, in the mid-18th century, and straight razors remained the most popular shaving implement until well into the 20th century.

King Gillette’s late 19th century improvements to the then-relatively-unknown safety razor, gave men the confidence to begin shaving themselves regularly, rather than having a barber perform the task only occasionally. The straight razor quickly fell out of fashion, and the double-edge safety razor reigned supreme as the shaving tool of choice for the better part of a century. Thereafter, disposable and cartridge razors proliferated. Now the three, four, five, and even six-blade disposable cartridge razor is king, though in design and use, they really are not so different from King Gillette’s double-edge safety razor of over 100 years ago.

Lockheed Martin’s Advanced Development Programs, otherwise known as the company’s Skunk Works, is responsible for developing the world’s most advanced, and often most secret, aircraft. Ever since 1938, when Lockheed engineers were asked to design and build a high-altitude, high-speed, long-range fighter capable of competing with the superior aircraft of the German Luftwaffe, the Skunk Works has been churning out the most advanced aircraft of every generation. The U-2, the SR-71 Blackbird, and the F-22 Raptor have all had their origins within the Skunk Works. 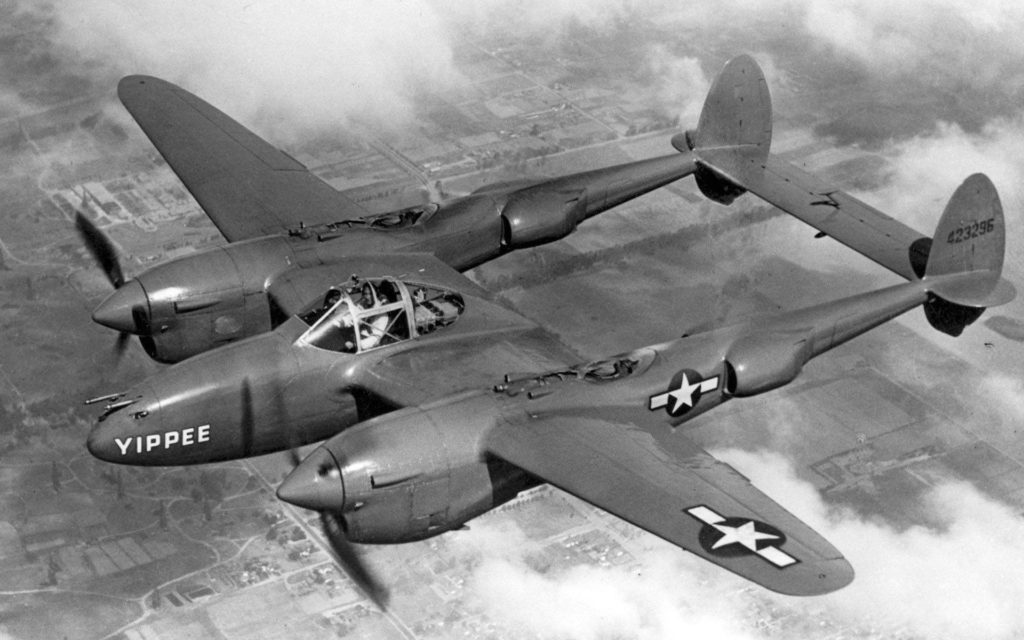 The result of that first 1938 project was the famed P-38 Lightning. The German pilots of WWII called it the Gabelschwanzteufel, or “fork-tailed devil,” while the Japanese called it Ni hikōki, ippairotto, or “two planes, one pilot,” both alluding to its distinctive design. The United States Army Air Force used the P-38 for dive bombing, aerial reconnaissance, night fighting, and escorting bombers throughout WWII, especially in the Pacific theater. Clearly, Skunk Works engineers had delivered. They continue to do so to this day.

The fifth-generation F-35 Lightning II, another Skunk Works program, with its thrust vectoring, vertical take-off and landing capabilities, stealth technology, and a $400,000 pilot helmet that allows the pilot to “see” a 360-degree bubble around him or herself, represents the pinnacle of military aviation engineering. It is truly a marvel of modern science.

Admittedly, the shaving razor and the F-35 Lightning II have very little in common. One is an ancient technology that has not really progressed much in the last 100 years, and the other is the stunning result of rapid and unceasing technological advancement over that same century. However, at the crossroads of these two seemingly disparate technologies, there stands a man. 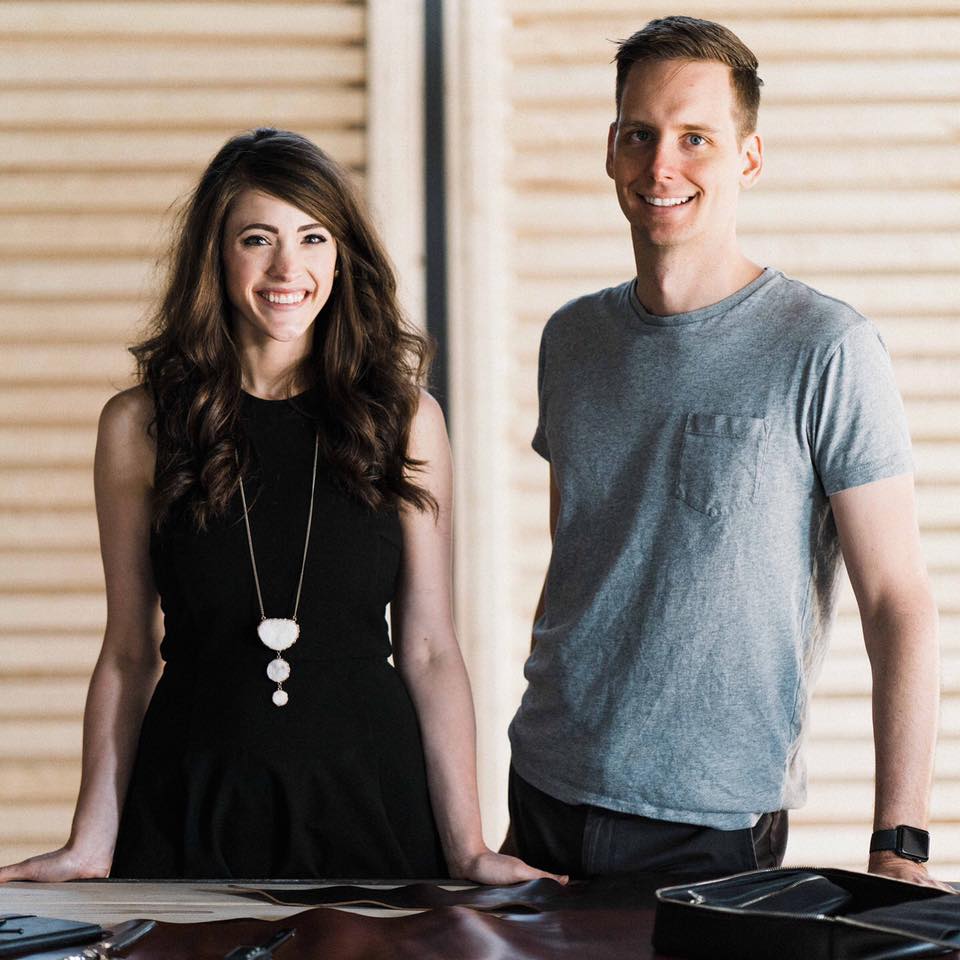 Upon inheriting one of his grandfather’s old safety razors as a young man, Coddou’s interest in shaving was ignited. Shortly thereafter, Coddou started a shaving blog where he and a friend reviewed shaving tools and accessories. Without a thought of ever monetizing his blog, Coddou slowly built a following among shaving enthusiasts, as well as a personal database of all the things he liked and disliked about available shaving products.

With a degree in mechanical engineering from The University of Texas and an MBA from Southern Methodist University, Coddou is a unique blend of engineer and entrepreneur. After spending eight years climbing the ladder at Lockheed Martin, he knew it was time to follow his dream of starting his own company. While he had a number of attractive ideas, his experience with and love of shaving tools and accessories was a natural launch pad for his first start-up.

Coddou understood from personal experience and extensive product research that new is not always better. He found that his grandfather’s old razor consistently provided a better shave than the new-fangled, multi-blade contraptions that had taken over the shaving market.

His engineer’s brain went to work figuring out why this was, and if perhaps there is an even better way to remove those pesky facial hairs. What he found is that a well-made, well-honed single blade cuts the hairs quickly and cleanly, whereas the leading blade of a multi-blade cartridge lifts the hair while the second blade cuts it below the skin-line, causing those uncomfortable, unsightly, red bumps know colloquially as “razor burn.” 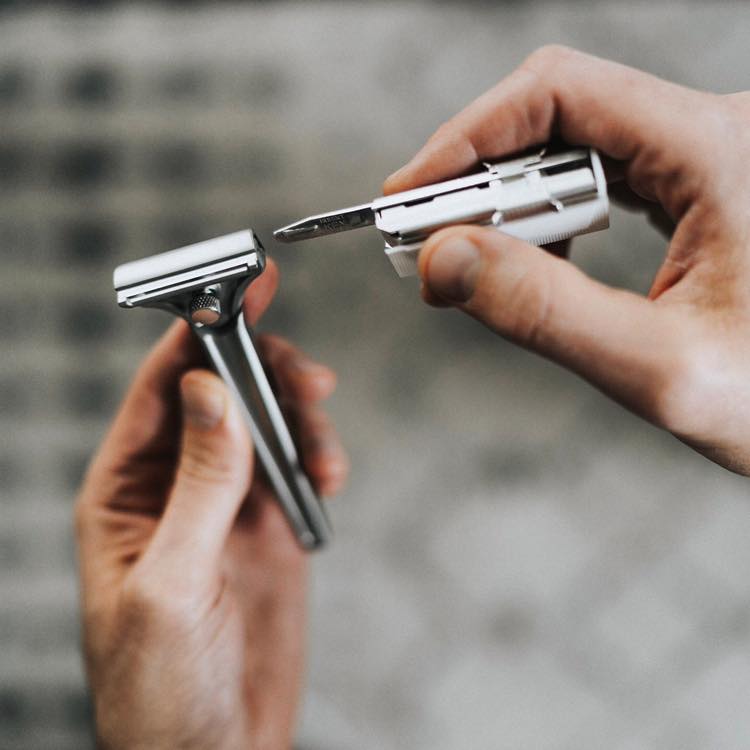 Coddou’s grandfather’s razor utilizes what is known as an injector blade. While never as popular as the double-edge blade, the injector blade is twice as thick as a double-edge blade and sports a very sharp single edge. “It’s more like shaving with a straight razor. It’s a little hard to quantify, but the thicker blade provides what I call a more substantial shave. It just wipes the hair off your face,” says Coddou.  For this reason, he settled on the injector blade as the foundation for his new razor.

For the razor itself, Coddou wanted a design that is classic, yet modern; well-made, yet affordable. Of his design process, Coddou says, “First and foremost, I want to design products that I love and that solve real problems for real men.”

The result of Coddou’s design is more than a superlative shaving tool at an affordable price. Called the Single Edge, this razor is as much a work of art as it is a grooming device. Its lines are at once Art Deco suave and fighter plane sleek. It’s Humphrey Bogart taking Ingrid Bergman for a joyride in an SR-71 in the skies above Casablanca. It’s sexy, glamorous, and manly. 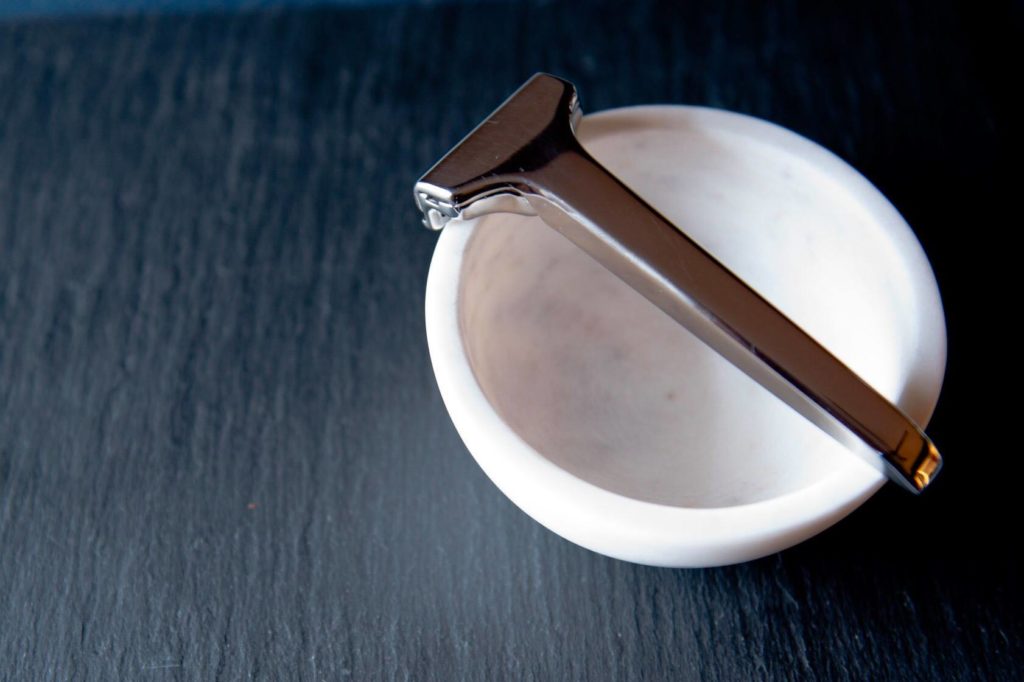 The Single Edge is the modern-day fighter plane of the shaving world. Without a single nod to convention or prettiness, there is nothing dainty about it. Its heavy. It’s solid. Like a fighter plane, there is no doubt what it’s for.

A fighter plane is a purpose-built, precision tool designed to project the will of a nation onto its enemies. The Single Edge is a purpose-built, precision tool designed to knock the beard off your face. It just happens to do so gently and cleanly. “The handle itself is very easy to shave with. It’s more intuitive that a double edge razor,” says Coddou. “It’s all about finding the right angle [for shaving], and with our razor, that angle is built into the handle.”

As for the future of Supply, Coddou plans to open a retail location next year in District 90, the redevelopment of industrial warehouses at the intersection of Berry Street and 8th Avenue. He also plans to launch new skincare products to compliment Supply’s nearly comprehensive line of shaving accessories.

Is the Single Edge new technology? Not exactly. As far as big razor manufacturers are concerned, it is, perhaps, even a step backward. Their sights are clearly set on the more-is-better approach to cramming blades into expensive disposable cartridge systems. The Single Edge is, however, a much better execution of anything the shaving world has seen in a very long time. 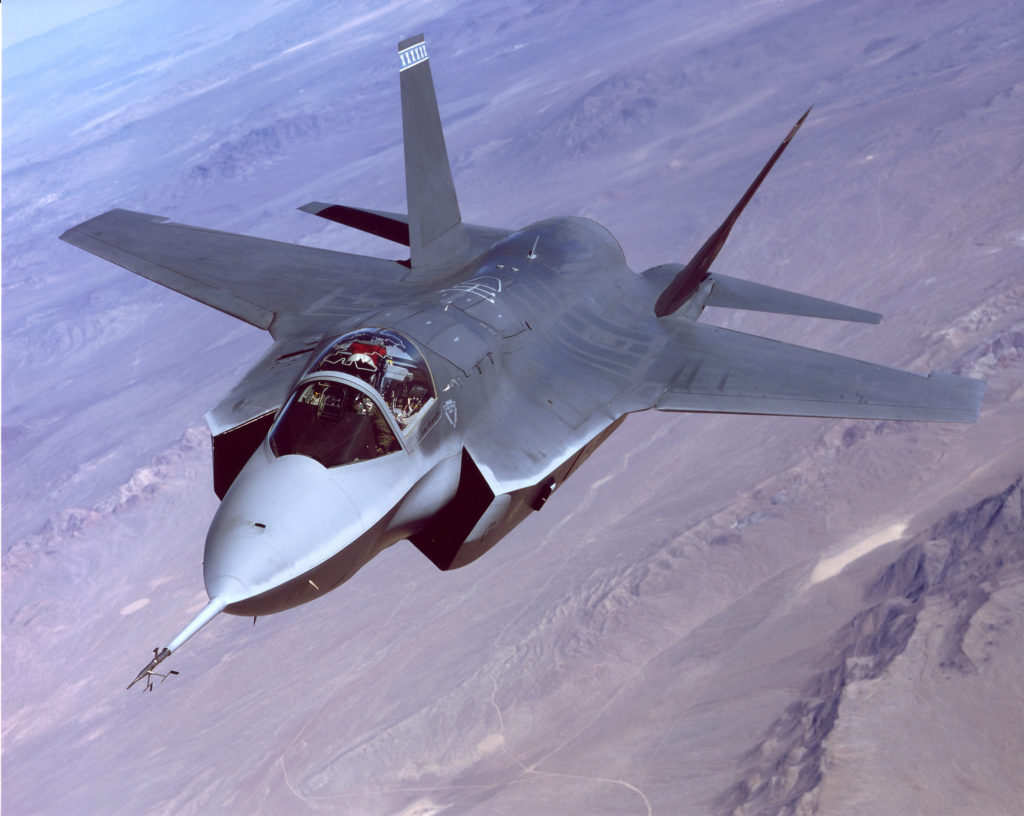 Comparing the shaving tools of our grandfathers’ generation to the Single Edge is akin to comparing the P-38 Lightning to the F-35 Lightning II. They both do the same thing; however, one of them just does it a heck of a lot better. And both the F-35 and the Single edge look amazing doing it.